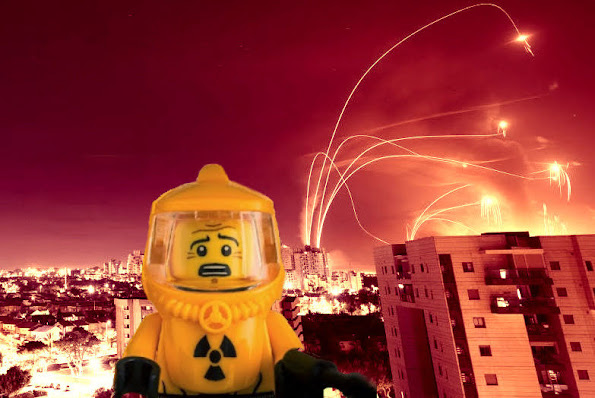 Amid worsening rocket attacks in the Holy Land there's a war for the heart & soul of the Democratic Party and Prez Biden is losing.

Meanwhile, the discourse in the American Heartland is far easier to understand.

A BOLD MISSOURI RESOLUTION STANDS UP FOR ISRAEL & DENOUNCES TERRORISM!!!

Penned by GOP STL MO Rep. Justin Hill, here's the money line and the right-wing premise that offers a scathing rebuke of the Palestinian side of the conflict . . .

Be it further resolved that the Chief Clerk of the Missouri House of Representatives be instructed to prepare a properly inscribed copy of this resolution for members of the Missouri congressional delegation and the Prime Minister of Israel, Benjamin Netanyahu.

This resolution is NEVER  gaining any traction and it’s probably too hot for even most Show-Me State Republicans. Still, it offers a glimpse at what hardcore GOP conservatives think of the situation . . . Which is important given that they hold the super majority.

KANSAS CITY PROGRESSIVES HAVE BEEN REMARKABLY SILENT ON THE TOPIC OF ROCKET ATTACKS AGAINST ISRAEL WHILST DEBATE THREATENS TO DESTROY THE DEMOCRATIC PARTY FROM WITHIN!!!

Mayor Q might be running for higher office and working his way to the nation's capital very soon and so he's smart enough to stay mum on the topic . . . Meanwhile, our chattering classes who love to address "injustice" throughout the MSM news cycle aren't saying much on this topic that has dominated global headlines and confounds so-called progressives who are strangely demanding a ceasefire/surrender from a U.S. ally and the only government that remotely resembles a Democracy in the Middle-East.

Accordingly, here a peek at a few worthwhile items for further reading, edification and insight . . .

'I'm troubled by it': Dems trash Biden's handling of Israeli strikes in Gaza

"I just think it's a no-brainer for the United States to be pushing for a ceasefire," Sen. Chris Murphy (D-Conn.) said. "If Israel doesn't believe a ceasefire is in their interest, that doesn't mean we have to accept that judgment. We have enormous persuasive power."

A number of congressional Democrats are ramping up pressure on the Biden administration to more forcefully engage on the Israeli-Palestinian conflict as violence in the region intensifies, revealing a delicate shift in the way Democrats have talked about Israel for decades and a small crack in the party on foreign policy.

The Israeli-Palestinian conflict is exposing a rift among Democrats

Over the past several years, the Democratic Party has moved further left on US policy toward Israel, showing a greater willingness to criticize Israel and speak up in defense of the rights of Palestinians. But President Joe Biden doesn't seem to have gotten the memo.

Sirens wailed just before the Jewish holiday of Shavuot began on Sunday evening, sending Chen Farag and her family once again running for cover as they have dozens of times over the past week since the latest war between Palestinian militants in Gaza and the Israeli military erupted.

A majority of the Senate Democratic Caucus on Sunday called for an "immediate ceasefire" in the Israel-Palestinian conflict, a move that President Joe Biden's administration has not yet made. Earlier today, U.S. Secretary of State Antony Blinken urged returning to "calm" and an end to the violence in Gaza.

Six rockets were fired from Lebanon toward Israel late Monday, but they apparently fell short of the border fence. The military said it responded with artillery fire. The rockets triggered warning sirens in some communities near the border. The army later ordered communities within four kilometers (2.5 miles) of the northern border to open bomb shelters.