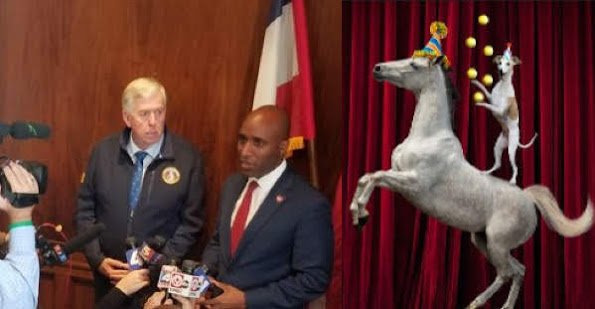 Now more than ever we realize that Kansas City's Mayor doesn't really know what he's doing and he allowed himself to be tricked into a losing fight.

To wit and because this is all just a dog and pony show that’s going to be cancelled by the Guv & the Missouri General Assembly GOP Super Majority . . .

TKC TOLD YOU SO!!! GUV PARSON IS FIRST IN A LONG LINE OF LEADERS WAITING TO SMACK DOWN MAYOR Q'S SKETCHY PLAN!!!

THIS SCHEME HAS BEEN SUCCESSFULLY LABELED 'DEFUND' DESPITE THE MAYOR'S INSISTENCE THAT THE EFFORT MERELY DEMANDS REALLOCATION AND ACCOUNTABILITY!!!

Sadly, the city hall honcho and his advisers have always been too arrogant and smart for their own good. A simple review of syllables reveals which side the public will believe . . .Fear of police defunding resonates with far more than municipal accounting procedures and good government promises .

Even worse, consider these supporting factors . . .

- Nearly half of the KCMO city council opposes this plan.

- All of Missouri's GOP super majority are opposed.

- The Guv is now on record smacking down the idea.

- And today's Harris Faulkner interview didn't go well. Her questions exposed the lack of detail in the mayor's idea which creates less transparency than police board governance.

- Most importantly, Look closely and notice that support for Mayor Q among Democratic Party colleagues is hard to find.

Accordingly . . .We share this latest volley of links revealing that the MAYOR Q IS LOSING THIS DEBATE only a day after he started the fight.

KANSAS CITY, Mo. - Gov. Mike Parson's office is speaking up one day after Mayor Quinton Lucas and the city council passed a dramatic shift in funding for the Kansas City Police Department. Lucas and majority of the council passed two ordinances Thursday restructuring the police budget and how funds are allocated.

'A complete ambush:' Police board member says of KC's move to reallocate millions from KCPD

Kansas City Mayor Quinton Lucas is trying to sell his plan of reallocating money for the police department. He went on Fox News Friday morning saying it's time for a new approach to stopping violent crime. The ordinance was introduced and passed within six hours Thursday.

KANSAS CITY, MO (KCTV) --Things got heated Thursday at Kansas City council chambers today when a coalition of eight council members and the mayor pushed through ordinances that would take control of more than $40 million of the already approved police budget and allocate it to what they are calling a Community Services and Prevention Fund.

KANSAS CITY, Mo. - Some Missouri lawmakers angered by recently adopted budget changes to the Kansas City, Missouri Police Department have their own ideas for what should happen next. On Thursday, Mayor Quinton Lucas announced two proposed ordinances aimed at increasing accountability for KCPD.

KANSAS CITY, MO (KCTV) --- Kansas City Mayor Quinton Lucas is defending his new budget plan which places more police funds under city control. He was on Fox News arguing this is not a defunding plan.

The reallocation of more than $45 million for the Kansas City Police Department budget on Thursday came as a surprise to several community members, especially those who have called for taking money away from the department in recent months.The city council's majority vote to transfer control of tens of millions of dollars from a state-appointed oversight board will give Kansas City elected leaders more control of the budget.