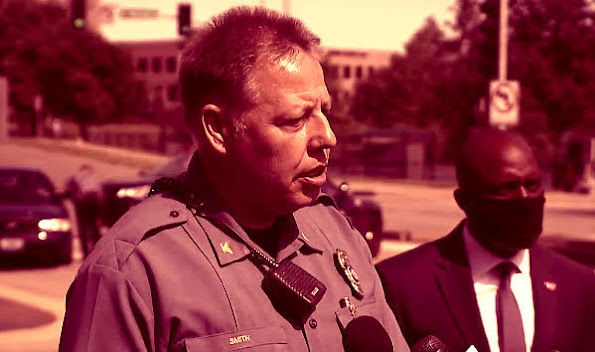 Here's an important statement from the top cop and a peek at Kansas City budget politics behind the scenes for attentive readers.

Within the month of April, our Police Athletic League had 1,019 contacts with youth. In the current school year, three Youth Programs Section officers and one sergeant worked with more than 2,000 students teaching D.A.R.E. and G.R.E.A.T. curriculum both virtually and in person in 18 schools. They spend 15 to 18 hours a week in the classroom. They often eat lunch with students and join them at recess. Before the pandemic, they reached 4,000 children in 30 schools. The relationships our Youth Services Unit builds through these interactions are priceless. They build bridges in the community and help kids make smart choices.

Unfortunately, however, those programs would be among the first to get cut if our current hiring freeze continues. We would have to eliminate elements whose officers primarily are tasked with community policing and relationship building. The officers assigned to those units would be reassigned to answer 911 calls, which is our core duty.

So far in 2021, we are losing 8.5 officers per month to attrition. Last year, the average was 7.58 per month. The number has risen steadily since 2011, when the average officer loss was just 3.25 per month. This usually is not much of an issue because we are able to fill those positions with new recruits coming out of the Academy. We have not had an Academy class since February 2020 due to funding, however, so we have continued to fall farther and farther behind on staffing. We are down 116 officers and do not have the budget to replace them.

If KCPD continues to lose officers at the 8.5 per month rate, we will have 1,151 by April 2022. That is equivalent to the amount of officers KCPD had in 1993, at which time Kansas City, Mo., had a population of about 435,000. Our city now approaches 500,000 in population. The 1,151 number assumes the 8.5 per month loss rate does not increase. Given the increases over the last 10 years, however, it seems that number will continue to climb.

It takes 10 months of training both in our Academy and in the field until a new officer can operate independently. Hypothetically, if we were able to start a new Academy class on June 1, those recruits would not be in the work force until April 2022. Even then, they would still be on probationary status for an additional six months.

In short, our current hiring freeze is setting the Department back in adequate staffing for years to come.

Practically, what does this look like? I already mentioned the reduction of community outreach programs. Increased response times also will be inevitable. Earlier this week we had to send officers from Shoal Creek Patrol Division north of the Missouri River all the way down to the southern end of the city in South Patrol to answer a 911 call because no one else was available. Residents already are waiting for some time for police to respond to non-injury crashes, burglaries, property damage and other incidents not involving threats to life or safety, and they deserve more prompt service.

Those increased response times will impact other emergency services, as well. Paramedics, EMTs and firefighters rely on police to ensure their safety before entering many types of situations. So far just this year, police have had to render the scene safe for the Kansas City Fire Department nearly 6,100 times. Many of those are medical emergencies in which seconds mean the difference between life or death. A delayed response from police in these situations will put lives on the line.

So far I’ve only discussed the shortage of police officers in the hiring freeze. Our professional staff are experiencing significant reductions, as well. We’re losing about seven non-sworn staff members per month. How does this impact the public? One example is our Crime Laboratory. We are down 11 people there currently, which is 15% of the staff. This will lead to case backlogs and significant delays in solving crimes using science and technology.

The people who live, work and play in Kansas City expect and deserve quality police service. A safe city drives economic development, which improves everyone’s quality of life. Given our current budgetary restrictions, we are increasingly unable to provide the kind of service our community has come to expect.

We are asking for the community’s support to get the funding to end our hiring freeze. The City received $97.5 million from the American Rescue Plan Act. We ask that you ask your city council members to allocate some of that to the Police Department so that we can provide the timely response, criminal investigations and much-needed community engagement you deserve.