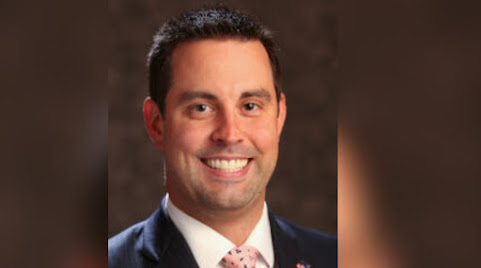 The politico at the center of faith-based controversy during a substitute teaching gig was formerly an associate one of the top ranking Kansas City power player law firms . . .

Special thanks to THE VERY BEST & BRIGHTEST TKC READERS for finding this not so long ago shout out . . . And so, the politico's fall from grace has seemingly been a long time in the making.

Meanwhile, here's a quick roundup of national coverage on the drama confronting this low rent politico that many of our progressive friends are using to rant against religion in the classroom . . .

Anonymous said…
religion is one thing. a violent sermon is something completely different.
5/2/21, 7:26 PM

I don't think I believe this story. BTW how is it O.K. for Sharice Davids to threaten to kill any American who is not an indian and there is proof of that, but this story has no pictures or video to back up the claim like they say it does.

Anonymous said…
He is not deranged. He is a typical evangelical follower of Donald Trump. What's the big deal?
5/2/21, 8:38 PM

Anonymous said…
they just make this shit up and expect us to believe it.... like Matt Gaetz is a pervert except there are no real witnesses or accusers. Meanwhile Cuomo is leading the governors on Covid after killing 15000 geriatrics and molesting at least 10 women (who are real live people)
5/2/21, 8:43 PM

1. view right and wrong as its been understood for hundreds of centuries, universally accepted by all countries and all races (things like murder, child molesting, abuse, stealing, damage to property, drug use).

2. view right and wrong by the lame rules idiot lawmakers place on the books!

Anonymous said…
The Libtard media continue to blow stories about Conservatives out of proportion as Big Tech helps them in the same fashion as Joseph Goebbels, minister of propaganda for the German Third Reich, helped Adolf Hitler take away people's rights, ability to work, guns and eventually their lives.
5/2/21, 10:33 PM

Anonymous said…
Wtf are you babbling about. Nobody is allowed to put their hands on students and they can't intimidate students because that does not enhance the teaching process. As far as the congressman's stick being a preacher guided by voices they clearly have no future in that career path. The isn't Hitler but it's Trump. The money has ran out and every politician is left hanging and desperate for cash. To bad, fuck off.
5/2/21, 10:54 PM

Anonymous said…
They should have corporal punishment reinstated. A mouthy shitbag raised by a single progressive whackadoo mother spouts off shit that would've gotten my ass paddled in school, and again at home just to score the point. Sets off a substitute teacher who's only there to babysit these little shits. Student teaching at some ghetto school northwest of the loop turned my wife from stepping foot in a class room. Got her degree, her certs, walked away from the cess pool of public education.
5/2/21, 11:49 PM

Anonymous said…
I hate to say it but......lawyers are not popular anymore. When the lawyer in waldo got shot dead a couple years ago by the old man he had sued, many of my friends were pleased. The old man had shot a burglar in the leg, at night, but ended up losing millions to the burglar - thanks to the liberal lawyer. Why didnt that lawyer just tell the burglar "what did you expect, you got what you deserved?" And:

Actually those facts are correct. A business owner shot a homeless intruder with a long rap sheet and was sued for it. The business owner then shot the Attorney dead. In broad daylight with a hunting rifle and was not caught for months. The burglar is happy as he has several million dollars, the attorney and the old man are screwed. Only the intruder won! The attorney's kids are now fatherless for life, all due to taking a case to help a criminal.
5/3/21, 11:21 AM

Old man was protecting his property and life-time sweat equity from burglars and this fucking lawyer took everything he owned.

The lawyer is burning in hell with the other cocksucker lawyers.

Anonymous said…
@11:21 - The wife of the attorney won. Attorneys have small dicks and that is why they are such assholes. Hopefully, she is getting some BBC now and spending the million her attorney husband stole from the old man.
5/3/21, 11:25 AM

Anonymous said…
Mercy the comments on this blog, any one with a good comment is chased away by this

Anonymous said…
@2:18, that's what you get in anonymous free-speech zones. Unadulterated truth, opinion, and unpopular fax. That just the way it is. As far as the lawyer who got kilt, that's a tough one. He ruined that old a-hole's life, and old a-hole took the only option he thought he had. The lawyer was about as morality dirty as they get though.
5/3/21, 4:07 PM

Anonymous said…
he's used his elected role to promote parity of treatment of mental health problems, so that's good, but looks like he's a bit of a mental case himself,

dude basically telling these kids they're gonna end up living in a van, down by the river

Anonymous said…
Wellsville is a shit hole of a town with a lot of ignorant low lifes as residents. Schools are terrible which is why this piece of crap was teaching there dressed like he came out of a hole in the ground. How about wear some big boy pants and ditch the ball cap. He’s an evangelical lunatic. The fact he’s only got a misdemeanor assault charge tells you everything about that trashy town.
5/3/21, 7:08 PM