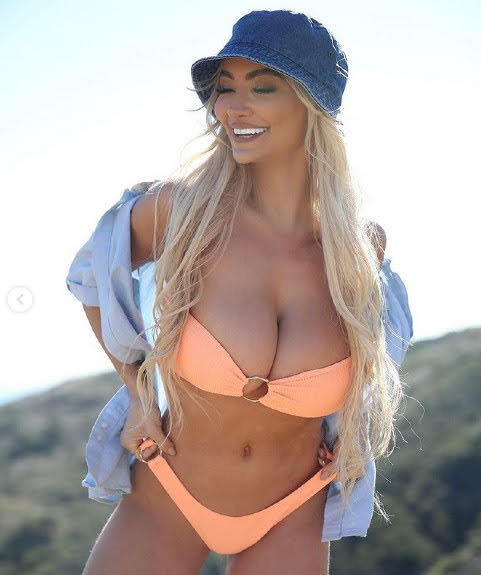 Right now the insta-hotness of Lindsey and her impressive promo game inspire this peek at pop culture, community news and top headlines.

The City of Kansas City, Mo., is celebrating the official start of the 2021 fountain season in the City of Fountains. Fountain Day, is a Spring ritual and holiday unique to Kansas City, this year on May 4. Kansas City Parks Department employees are spending the day turning on fountains across the city, including the one at The Concourse.

Be bear aware! Missouri's black bears have started coming out of their dens

The Missouri Department of Conservation said an estimated 800 black bears call Missouri home, and as the spring season gets underway, these mammals leave their winter dens in search of food.

Tens of thousands of uninsured Kansans qualify for enough government subsidies to get free health insurance. That was the case even before the passage of Congress' latest stimulus package in March, but now those benefits are available to many more people.


Lindsey Around The World

Facebook Board Readies For Its Biggest Decision Yet: Whether To Reinstate Trump

Facebook's independent oversight board on Wednesday is expected to announce its biggest decision yet: whether to uphold or reverse Facebook's indefinite ban on former President Donald Trump. The decision to ban Trump from both Facebook and Instagram, which the company owns, came after the January 6th attack on the U.S.

Tucker Carlson: If you let Democrats force you to get the vaccine, they'll have complete control forever

Back in March, Joe Biden gave his first prime address as president. Almost all 24 minutes of the speech were devoted to promoting the new coronavirus vaccines - the miracle of medicine. One of the administration's main priorities, Joe Biden told the country, was making sure every American got a COVID shot.

In the latest edition of HBO's Last Week Tonight with John Oliver, Oliver used the word "super" when describing Fox News host Tucker Carlson. But in this case, Oliver didn't mean "super" as in "superhero", "supercalifragilisticexpialidocious", or even "super flex underwear waistband." No, he referred to Carlson as a "superspreader" of fears and doubts about the Covid-19 vaccine.

Caitlyn Jenner, the celebrity-turned- California-Republican gubernatorial candidate, released her first ad of the crowded recall campaign to replace Gov. Gavin Newsom on Tuesday. The ad highlights the "American Dream" in midcentury California before blaming politicians for the state's decline. "Career politicians and their policies have destroyed that dream," the ad says.

Overland Park approves plan to convert all streetlights to LED

OVERLAND PARK, Kan. - The main thoroughfares in Overland Park, Kansas, will soon be brighter at night and more energy efficient. The city council voted Monday night to move forward with a plan to convert all streetlights to accommodate LED bulbs.

The Royals have signed veteran shortstop Alcides Escobar to a minor league deal and have assigned him to Triple-A Omaha. Escobar is an 11-year Major League veteran who played with the Royals from 2011 to 2018. He was an All-Star in 2015 and won his only Gold Glove that year.

FORECAST: Serious chill in the air this evening

There will be a serious chill in the air this evening. Skies are expected to completely clear by sunset sending temperatures tumbling into the upper 40s well before midnight while a light north, northwest wind gently eases into our area.

AJR - BANG! is the song of the day and this is the OPEN THREAD for right now.