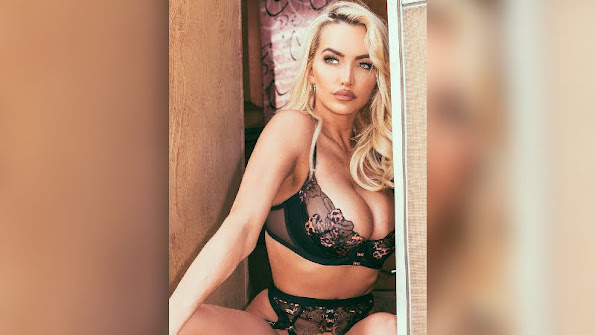 Tonight we share a peek of a milestone for hottie Lindsey along with pop culture, community news and top headlines.

KANSAS CITY, Mo. - A group of Kansas Citians will take the stage tonight to discuss how Kansas City has changed in the year since the murder of George Floyd. The discussion is hosted by the Kansas City Public Library, and is part of a reporting collaboration - 9:29: The minutes that changed Kansas City - between 41 Action News and KCUR-FM 89.3.

KANSAS CITY, MO (KCTV) -- Kansas City police are reaching out to residents near 18th and Vine Tuesday night following a series of violent crimes in the entertainment district. Police are calling the 6 p.m. event at the Gregg-Klice Community Center a "listening session" It comes one week after someone was charged with a murder nearby.

US model Lindsey Pelas has never struggled for attention. The 29-year-old Playboy stunner is more than happy to flaunt her fantastic figure in skimpy bikinis and sexy underwear, as fans can see on her social media pages. Not only that, she has also graced the pages of huge magazines like Maxim, GQ and Glamour with some steamy shots during her successful career.

Manhattan's top prosecutor has convened a grand jury that is expected to decide whether to indict former President Donald Trump should prosecutors present criminal charges in their probe of the Trump Organization, two people familiar with the matter told The Washington Post.


Quick Peek At The Hill

Rep. (S.C.) criticized fellow Republican Rep. (Ga.) over her remarks about the Holocaust, offering a flowchart Tuesday on avoiding invoking the genocide of Jews during World War II. Mace in a tweet condemned Greene for her latest remarks doubling down on a comparison between vaccinated employees wearing a "vaccination logo" and Nazis making European Jews wear yellow stars during the Holocaust.

Analysis: Why scientists are suddenly more interested in the lab-leak theory of Covid's origin

The United States is closer than ever to beating Covid-19, with half the country vaccinated and more restrictions lifting.

On the first anniversary of George Floyd's death at the hands of Minneapolis police, members of Floyd's family met with President Joe Biden and Vice President Kamala Harris at the White House as they continued to push for policing reform. (May 25)

Elliot Page posted his first shirtless shot on Instagram since revealing he underwent top surgery The Oscar nominee, 34, posted a shot of himself shirtless by a pool on Monday, showing off his red swim trunks - and his abs!

ST. PETERSBURG, Fla (AP) - Kansas City Royals shortstop Adalberto Mondesi has been reinstated from the 10-day injured list after missing the first 45 games of the season with a right oblique sprain. Mondesi was hitting seventh in the Royals' posted lineup for Tuesday night's game at Tampa Bay.

KANSAS CITY, Mo. - Blue Koi, a 39th Street staple for more than a decade, has closed its doors. The restaurant's owners said in a Facebook post that Tuesday was the last day of operations at the Kansas City, Missouri, location and they are "consolidating [their]efforts at the Leadwood location."


Warmup On The Way

Hide Transcript Show Transcript OTHERWISE IN THE 80S FOR MOST FOLKS AND WE'LL CONTINUE TO DROP THROUGH THOSE 70S AND OYNL ABOUT A 30% CHANCE OF RAIN AND THUNDERSTORMS ODDS ARE GOING TO STAY DRY.

And this is the OPEN THREAD for right now. Comments will be open for the next couple of hours . . .