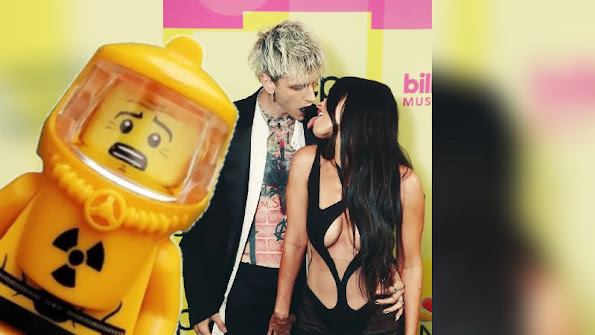 Right now we consider an "actress" who hasn't been in a decent move in nearly a decade but, clearly, still knows how to grab attention. Accordingly, we take a quick pause to share pop culture, community news and top headlines.

KANSAS CITY, MO (KCTV) -- RideKC says they will be increasing their on-board capacity at the end of the month. Starting May 31, riders will be able to sit anywhere on RideKC buses and board at the front and rear doors. That also applies to RideKC Micro Transit and RideKC Freedom paratransit vehicles.

LEE'S SUMMIT, Mo. - Eighteen months after one college student was killed and one high school student was seriously injured in separate crashes at intersections on the same highway, officials are set to begin on safety improvements. The crashes happened a day apart in December 2019 at the 16th Street and Scherer Road intersections on 291 Highway.

KANSAS CITY, MO (KCTV) -- Evergy is warning their customers about yet another phone scam that is occurring where the scammers threaten to disconnect service unless paid immediately. "For past-due accounts, calls from Evergy requesting payment are never made the same day as the disconnection," a release from Evergy clearly states.

Demand at food pantries surged at the height of the pandemic. Now, some of those pantries are turning their attention to another immediate need.They are trying to feed the homeless in Kansas City who have been relocated to hotels.ReNewed Hope Food Pantry at 87th Street and Antioch Road in Overland Park, Kansas, is known for its massive drive-thru pantry every Tuesday.

Machine Gun Kelly and Megan Fox took the plunge and packed on the PDA at the 2021 Billboard Music Awards. The blond singer - born Colson Baker - and the raven-haired actress got some tongue action in as they walked the red carpet for the show Sunday night.

The Justice Department is partially appealing an order to publicly release a pivotal 2019 memo about whether then-President Donald Trump obstructed the Russia investigation.


Is It ‘The Big Lie’ If Everyone Believes It?!?

Most Republicans still believe 2020 election was stolen from Trump - poll

A majority of Republicans still believe Donald Trump won the 2020 US presidential election and blame his loss to Joe Biden on baseless claims of illegal voting, according to a new Reuters/Ipsos opinion poll. The 17-19 May national poll found that 53% of Republicans believe Trump, their party's nominee, is the "true president" now, compared with 3% of Democrats and 25% of all Americans.

For Rep. Marjorie Taylor Greene, stepping over the line is the point

Just four months after being sworn in as a freshman member of the House of Representatives, Rep. Marjorie Taylor Greene, R-Ga., has firmly established herself as the lower chamber's leading instigator. At a dizzying pace, she has accrued regular fines and reprimands and been stripped of her committee assignments, all while firing off tweets whose sole goal seems to be to offend a large swath of readers.


WHO Knows About COVID?!?

Data in WHO Covid-19 report annex may add weight to calls from China's critics for more transparency and to the investigators' desire to return to the country for further studies.

A Massachusetts woman tried to throw out a lottery ticket worth $1 million - but an honest convenience store owner made sure she got her payday. Lea Rose Fiega bought a Diamond Millions scratch-off in March at a store called Lucky Stop in Southwick, where she was a regular.

Sen. Rand Paul (R-KY) has attempted to place blame on Richard Marx-yes, the 1980s pop sensation-after a suspicious package filled with a white powder was delivered to his home. Fox News reported that the package came with an illustration showing Paul in a neck brace and the message: "I'll finish what your neighbor started, you motherfucker."

It might be time to start worrying about Whit Merrifield

Let's play a game, shall we? The question is - who is this Kansas City Royals position player, a longtime team veteran who has played both infield and outfield in his career and whose bat is above-average but not particularly flashy? If you responded "Who is Alex Gordon," you would be correct.

OLATHE, Kan. - Lots of recent rain means the grass is begging to be cut and lawn care companies are needing the work. But now many of those lawn care businesses are scrambling to catch up.

Spring Festivals Are Back And Helping Midwestern Towns Blossom


Credit Where It’s Due

KANSAS CITY, Mo. - Jessica and Kevin McClellan were traveling northbound on The Paseo when an SUV crossing 56th Street struck the driver side door. The crash on Sunday, May 16, sent the McClellan's minivan into a spin. Jessica said that's when something took hold of the wheel.


South Side Looking Up

New developments begin to materialize along Bannister & I-435

Things are looking up for the Bannister Rd. and I-435 corridor, and those involved are pretty excited about it. That's the takeaway from the May 10th South Kansas City Alliance meeting hosted by John Sharp.

Mark Kelpe and James Westphal, the managing partners of BeerKC Restaurant Group, are ready for a new chapter. According to a Monday release, the owners and operators of Beer Kitchen, Char Bar Smoked Meats & Amusements, Mickey's Hideaway and Port Fonda are ready to move beyond their roots.

KANSAS CITY, Mo. - A local woman said she had a rare reaction to the Pfizer COVID-19 vaccine after getting her second shot, and it's left her with many questions. "I think the scariest part is not knowing," Jodi Mancuso said. "Not knowing what's going to be next."

KANSAS CITY, MO (KCTV) -- Kansas City Chiefs tight end, Travis Kelce, is helping fund and create a center for high schoolers to explore technology and innovation in Kansas City. The Ignition Lab will serve as a transitional program into STEAM (science, technology, engineering, arts, and mathematics) for students participating in Operation Breakthrough, who are currently aging out of the program after 8th grade.

MORNING, WE HAVE A CLOUDY SKY, IT IS MUGGY, BUT IT IS RAIN FREE, 70 DEGREES WITH A LIGHT SOUTH BREEZE, BUT LIKTHE LAST ALMOST 10 DAYS IN A ROW, WE DID NOT GET ANY RAIN YESTERDAY, THAT BR OKE THE STREAK, WE CAN SEE A BRIEF DOWNPOUR OR A POP-UP THUNDERSTORMS, ISOLATED IN A FEW SPOTS THIS AFTERNOON INTO THIS EVENING.

The Weeknd - The Weeknd – Save Your Tears (Live on The 2021 Billboard Music Awards) is the song of the day and this is almost the OPEN THREAD but we'll talk about the comment changes in a few . . .