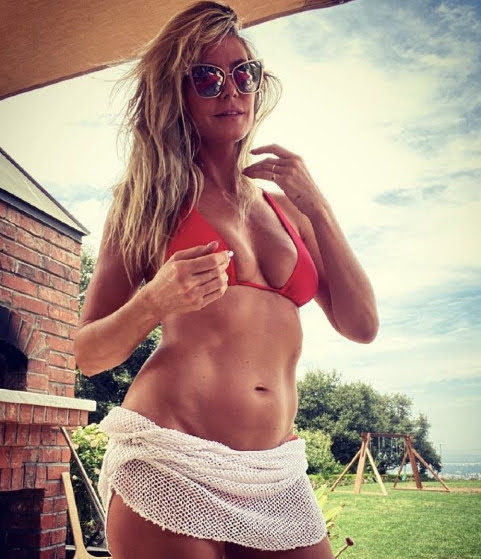 Hottie Heidi was one of our all time favorites and she has held up quite well. Her enduring body of work inspires this #TBT collection of pop culture, community news and top headlines.

The Kansas City Monarchs' long-awaited return to the diamond can now take place in front of a packed stadium.In accordance with updated protocols from Unified Government of Wyandotte County/Kansas City, Kansas, the Monarchs Baseball Club announced the team's May 18 opening day game at Legends Field will take place with unlimited capacity in the stands."After subsequent conversations with UG officials and the American Association of Professional Baseball, it was determined that the Monarchs will plan to sell up to 7,000 tickets per game," according to a news release issued Thursday from the Monarchs.

The Kansas City metro hit a major milestone with 500,000 completed COVID-19 vaccinations just weeks after Comeback KC launched the Two Million Arms KC campaign. The campaign is designed to help the Kansas City region by providing vaccine information and encouragement in hopes residents will protect themselves, their families, and their communities.


Brand Demand Down Despite ‘No More Clots’ Assurance

Fifteen people on Wednesday received a dose of Johnson & Johnson's single-dose COVID-19 vaccine at Swope Health's clinic at 4401 Blue Parkway. The organization can give far more doses.Swope Health started giving the shots at the clinic on Tuesday in partnership with Missouri's state health department.

She has one of the most famous bodies in the world, thanks to her stint as a Victoria's Secret Angel. And on Wednesday, Heidi Klum showed it off as she shared a racy snap on Instagram. The German model was seen lounging on a sunbed wearing just a pair of tiny green bikini bottoms doted with daisy motifs.

Uncovering and explaining how our digital world is changing - and changing us. Donald Trump used to be everywhere on social media - but lately, it feels like he's nowhere. Many have noted just how little people have been talking about Trump - from cable news to Google searches - since he lost the election and was kicked off Facebook, Twitter, and YouTube four months ago.

The collapse in support is a remarkable fall from grace for Cheney, who just last year passed on an open Senate in her state to remain in House leadership instead. After ascending to GOP conference chair - the same post her father once held - she was touted as a future House speaker.

BOCHUM, Germany - Does a reassuring pat on the back bring you comfort during a tough day? A new study finds, when it comes to touching, people aren't even picky about who's doing the touching. Researchers in Germany say the touch of a humanoid robot makes people happier and more likely to follow their requests.


Way Of The World

The US Has Been at War My Entire Life. Will the Wars Ever End?

Here's the strange thing in an ever-stranger world: I was born in July 1944 in the midst of a devastating world war.

Caitlyn Jenner to Hannity on her bid for California governor: I'm an 'outsider' 'in a race for solutions'

California gubernatorial candidate Caitlyn Jenner sat down with Fox News' Sean Hannity on her bid to unseat Democratic Gov. Gavin Newsom in the upcoming recall. Jenner told Hannity on Wednesday how she's always been a "fighter" and will take that spirit to the Golden State capital.

KANSAS CITY, Kan. - Justin Bieber's popular song, "Peaches" recently hit number one on the Billboard Top 100. 41 Action News caught up with his music director and bassist, HARV, who is a native of Kansas City, Kansas. HARV shared his excitement when he found out the song made the number one spot.

OLATHE, Kan. - The Johnson County Extension Master Gardener Public Garden Tour will return this year after being canceled in 2020 due to COVID-19. The tour will be May 21-22 from 9 a.m. until 5 p.m. Each tour highlights five private gardens owned and maintained by Master Gardeners throughout the county.

MIGHT BE A NICE DAY TO GET SUNNY TO GET SUNNY DISSENT AT THE BALLPARK. NICK: A NORTH BREEZE AT KAUFFMAN STADIUM, 50 MILES AN HOUR, SO A TOUCH ON THE CHILLY SIDE. CLOUD IN THE PROCESS OF MOVING OUT OF KANSAS CITY, A PRETTY SUNRISE.

#1 this week in May 1991 Amy Grant - Baby, Baby is the #TBT song of the day, along with the reason a lot of white ladies try to wear hats and this is the OPEN THREAD for right now.