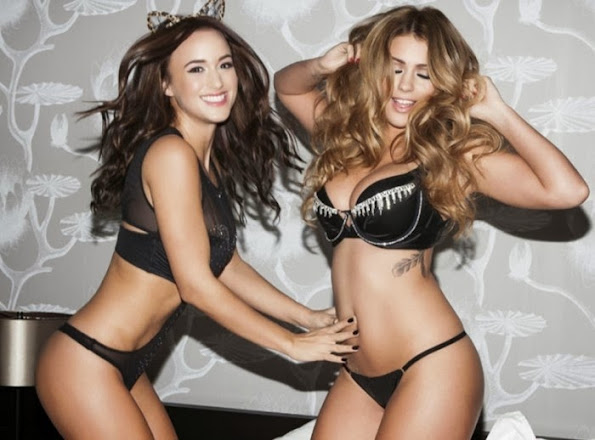 From a now defunct Brit magazine we remember hottie Rosie & Holly frolicking and pillow fighting throughout the night and that inspires us to take a peek at pop culture, community news and top headlines to start the day . . .

Pain At The Pump Worsens

If you're traveling by car for Memorial Day weekend you may want to budget a bit more money for gas. AAA reports the national average for a gallon of regular gas is about $3.04, and the average in Kansas and Missouri is about 20 cents cheaper.

KANSAS CITY, Mo. - Schools are out, summer is here and swimming pools are opening up this Memorial Day weekend across the Kansas City metro. But with lifeguard shortages and some cities still taking COVID-19 restrictions into consideration, not all city pools across the area are opening up.

ROELAND PARK, KS (KCTV) -- Memorial Day marks the unofficial start to summer with cookouts, family gatherings, and outdoor pools opening. But many outdoor pools may not open this year, because of problems finding staff. Roeland Park just finished up renovation of a new pool. In 2019, the city approved $1.5 million worth of updates.

Now Hiring! Where are all the unemployed workers?

Is it Boomers retiring in droves? Parents stuck at home with kids? Folks enjoying their COVID-19 unemployment benefits until the money ends in September? Other folks still too afraid of the pandemic to interact with the public? All of the above, say economists and business owners when asked why "help wanted" signs are popping up all over Kansas City.

Marjorie Taylor Greene may be politically safe, but her conservative Georgia constituents have concerns about her tactics

Marjorie Taylor Greene has turned herself into one of the most visible Republicans in the country -- stoking an endless stream of controversies that has caused headaches for a defeated party trying to find its footing while she rakes in campaign cash without fear of consequences.

The media appeared to have downplayed the migrant status of the murderer who was convicted in the brutal 2018 killing of 20-year-old college student Mollie Tibbetts. Cristhian Bahena Rivera was found guilty of first-degree murder on Friday after a two-week trial in Davenport, in a case that drew national attention because of the suspect's immigration status.

After Ryan suggested that the conservative movement was about more than fealty to the defeated president, Trump called the former House speaker a "RINO" and a loser. And then Trump, the rare Republican who has criticized Reagan himself, went after Fred Ryan, chair of the board of the Ronald Reagan Presidential Foundation.


Snail Mail Sticks It To Customers

Kansas Speedway offers laps at the track to those who get vaccinated, tested for COVID-19

The Kansas Speedway is offering laps on its track to people who take part in the Race to End COVID-19 event June 4-5.Speedway officials said fans who get a free COVID-19 test and/or COVID-19 vaccine on those days can enjoy an opportunity to drive two laps around the speedway.

First off, let me start with this: it's always good to beat the Minnesota Twins. I typically give a little shtick in every Royals/Twins game I recap talking about the boring irrelevance of the Minnesota Twins. Joe Mauer got 251 hits in his career against the Royals and I cannot remember a single freaking one of them.

Hide Transcript Show Transcript EVENTUALLY HAVE SUNSHINE, BUT I'VE GOT YOUR WEATHER ALREADY QUEUED UP IN THE NINEAY D FORECAST DON'T 'IVE UP ON IT YET. YOU'LL HAVE YOUR DAYS. WE HAVE GOT MOSTLY CLOUDY SKIES OVER THE CITY RIGHT NOW.

Marshmello x Carnage - Back In Time is the song of the day and this is the OPEN THREAD for right now.