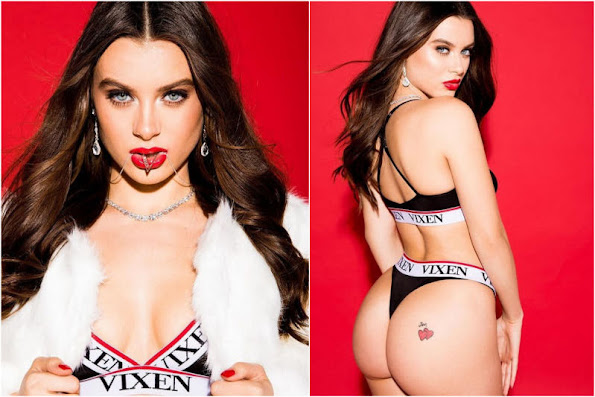 Per ushe we take a peek at the pr0n game as old school smut now sells mainstream merch with help from stars like hottie Lana who has garnered legions of online fans far more numerous than more "traditional" celebrities.

Accordingly, all of THAT inspires us to take a peek at pop culture, community news and top headlines.

Large chunk of I-670, south side of downtown loop, to close for weekend

Most of a major highway through downtown Kansas City will close this weekend for removal of a bridge.The Missouri Department of Transportation closed the Baltimore Avenue Bridge overnight, and demolition crews will start tearing it down at 8 p.m. Friday night.This demolition means I-670 will be closed all weekend between I-35 and I-70.

After two months of investigating, the Kansas Commission on Peace Officers' Standards and Training (CPOST) - the organization that regulates police officers' licenses in the state - has decided not to act against the certification of Overland Park Police Chief Frank Donchez.

NEW YORK (AP) - Kansas City Southern has abandoned its agreement to be acquired by Canadian Pacific, choosing instead a competing bid from Canadian National Railway with a bigger price tag, but also greater regulatory risks.

Former adult star Lana Rhoades says her biggest "flex" is going from school drop out to millionaire. In a Q&A with Playboy, she revealed she gave up on formal education when she was around 13-years-old. At the same time in her life, the Chicago-born star was already dreaming of flashing cameras and bright lights.

President Biden plans to host the family of George Floyd at the White House on Tuesday, the one-year anniversary of Floyd's death. Floyd, 46, died as the result of a Minneapolis police officer kneeling on his neck for more than nine minutes, a jury decided last month in the officer's murder trial.

New Coronavirus Detected In Patients At Malaysian Hospital; The Source May Be Dogs

In the past 20 years, new coronaviruses have emerged from animals with remarkable regularity. In 2002, SARS-CoV jumped from civets into people. Ten years later, MERS emerged from camels. Then in 2019, SARS-CoV-2 began to spread around the world.

'It's risky and it's dangerous': Dems plead for more security cash as threats rise post Jan. 6

That's raising concerns among some lawmakers, particularly Democrats, about how to plan a return to normal constituent events this summer - including, for many, their first in-person public gatherings since the deadly Jan. 6 riot. Rep. Veronica Escobar (D-Texas), who was inside theHouse chamber during the siege,said she's noticed a sharp uptick in individuals "accosting members ...

One of the most infamous faces of the Capitol insurrection -- the bare-chested "shaman" with horns and face paint -- is going to get his head checked to see if he's competent to stand trial. Jake Angeli, who many know as the "QAnon Shaman," was just ordered to be hauled off to a federal facility for a psychological evaluation ...

Monica Lewinsky wins Twitter with her response to 'the most high-risk, low-reward thing you've ever done'

The eyes have it. What's the most high-risk, low-reward thing you've ever done? When the online app UberFacts tweeted this question out on Friday afternoon, Monica Lewinsky responded with an emoji that's worth a thousand words. Make that a thousand tweets.

Handyman with Jewish Family Services does odd jobs for seniors

Hide Transcript Show Transcript THOSE ODD JOBS. WE'VE GOT TSEHE HUGE OAK TREES OUTSIDE. NO DOUBT ABOUT THAT AND WITH GUTTSER MEAN BY HIMSELF THESE DAYS. IT'S A HUGE DEAL FOR US.

Arrowheadlines: Patrick Mahomes calls for microchips to be installed in footballs

Patrick Mahomes calls for microchips in footballs to improve officiating | PFT "I've always thought the chip in the ball has to happen sometime, where if you cross the line, it just tells you a touchdown," Mahomes said on the WHOOP podcast, via the Kansas City Star.

Saturday: dodging raindrops until the afternoon

Hide Transcript Show Transcript RUN TOWARDS DISASTERS ARE ALWAYS PEOPLE WHO I RESPECT AND ESPECIALLY WHEN THEY'RE TRAINED AND NOW A LOT OF US HAVE THE HEART TO DOT, I BUT IF YOU'RE TNO TRAINED YOU CAN ACTUALLY CAUSE MORE PROBLEMS. SO GET YOURSELF NOW WITH AN ORGANIZATION THAT CAN TRAIN YOU IF YOU WANT TO BE A HELPER DURING SEVER.

Olivia Rodrigo - enough for you is the song of the day and this is the OPEN THREAD for right now.