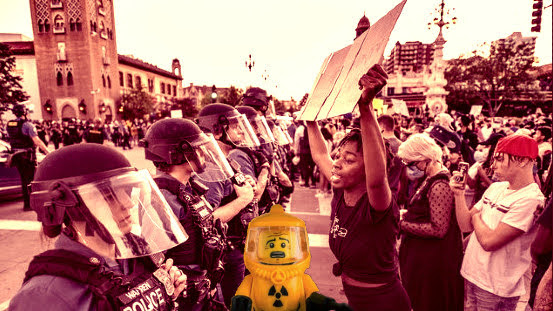 Today Kansas City activists focus on social justice progress following a historic murder and don't really want to talk about a series of Country Club Plaza riots that caused MILLIONS worth of damage during a global pandemic in their own backyard.

Meanwhile, a debate over the police budget reveals Kansas City is more divided than ever and likely just waiting for another occasion to riot.

Over the past year we've learned quite a bit about American Democracy and the Black Lives Matter movement in a series of one-sided discussions that follow carefully scripted talking points.

Meanwhile, there's little dispute that Kansas City and the nation have changed for the worse across the spectrum of demographic lines since the fateful day when a bad cop killed a drug addict in a town far away . . . And then the country burned.

KANSAS CITY, Kan. - May 25, 2020. When first hearing that date, people might not think much about it. But many around the world will never forget the name George Floyd. That was the day he was killed, sparking protests, immense grief, anger and calls for change.


George Floyd's Lasting Impact On Kansas City, As Told By Protesters And Residents

Images of George Floyd in his final moments moved Kansas City, our nation and our world in ways we are just beginning to comprehend. Looking back on the protests at Mill Creek Park in the days following Floyd's murder, KCUR and 41 Action News captured frustration, desperation, heartache and hope.

President Joe Biden and Vice President Kamala Harris will meet on Tuesday with the family of George Floyd exactly one year after he was killed by a Minneapolis police officer, sparking nationwide protests against racism and police brutality.

Civil Rights attorney Leo Terrell told " Fox & Friends" on Tuesday that President Biden hosting George Floyd's family at the White House shows how the case was "used to play the race card." BIDEN PLANS TO MEET WITH GEORGE FLOYD'S FAMILY ON ANNIVERSARY OF HIS MURDER LEO TERRELL: We are racially divided.


George Floyd death: How US police are trying to win back trust

It must be hard being a police officer in America, especially after the death of George Floyd. Damn right too, some would argue, given the shocking video of his last moments alive. Patrol woman Brittany Richardson is 34 and a 12-year veteran.

On the eve of the one-year anniversary of George Floyd's murder, the NBA social justice coalition called on the U.S. Senate to pass the George Floyd Justice in Policing Act as a way to honor Floyd's memory and other victims of police brutality.


A year after George Floyd's death, America is still grappling with police violence and reform

At 23, Afeni Evans had just gotten out of the Army and was studying political science at a community college in Maryland. Her goal was to someday help craft policy from inside the government.