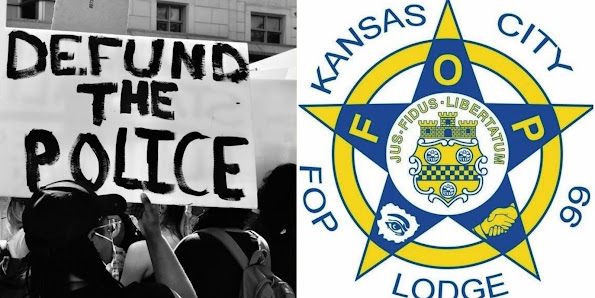 This public post from the Kansas City Fraternal Order Of Police deserves a second look if only because the numbers they're claiming are even bigger than what has been reported AND they're also lamenting rising crime on their watch.

"Bold move by some to intentionally defund the Kansas City Police Department by 54 million dollars in just three weeks. The equivalent of 450 positions will need to be cut if that decision isn’t reversed.

"Businesses are looking to find a place to settle and people are searching for a place to raise families. In the middle of all of that Kansas City is one of the most violent in the country and 9 people voted to strip 54 million from a budget needed to protect our citizens.

"Defunding police departments has become popular in major cities, but so has rising violent crime and citizens moving out of those cities. Most cities in our metro are growing and hiring officers, on the other hand Kansas City chose to ignore tax payers’ needs. In a world where defunding polls at about 12 percent, ignoring 88 percent of the rest of the city can’t be good for re-elections."

KCPD budget debate: Where will community engagement money be spent?

KANSAS CITY, MO (KCTV) - Ever since a supermajority of Kansas City's city council members passed two ordinances Thursday to reallocate a portion of the police budget, opponents have expressed concern it that it will lead to fewer officers in patrol or investigations.

Some Missouri Republicans, including Gov. Mike Parson, are criticizing Kansas City Mayor Quinton Lucas's new police budget plan as "defunding the police" and said they are working on upending it. At least one Kansas City-area Republican said he has asked the governor for a special session in hopes of swatting the plan down.