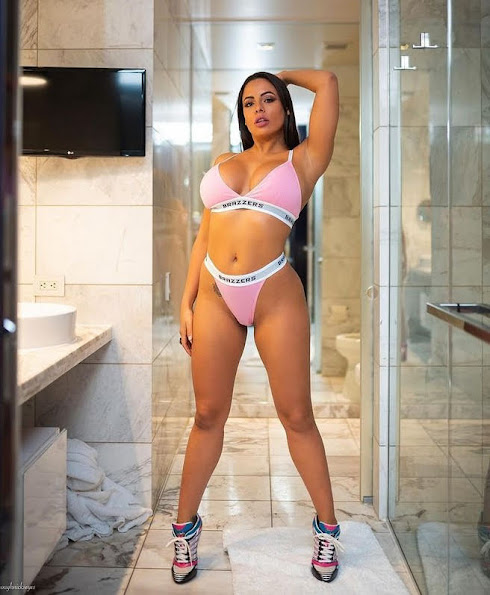 Right now we take a peek at hottie Luna posting in a bit of pr0n game merch promo and that inspires our peek at pop culture, community news and top headlines.

KANSAS CITY, Mo. - The Kansas City Chiefs will have a whopping five primetime games once again this season as they look to return to the Super Bowl. On Wednesday night, the National Football League released the full regular season schedule for all teams, including the Chiefs.

KANSAS CITY, Mo. - Managers at Fav Trip on Blue Ridge Boulevard have been seeing an influx of drivers filling up their gas tanks since late last week. District Manager Mcclinton Luster said one driver purchased $400 worth of gas, the most he's ever seen one person buy.

KANSAS CITY, Mo - Truman Medical Centers/University Health took its show on the road Wednesday. The hospital system's community health unit targeted businesses along Troost Avenue to help spread awareness of the COVID-19 vaccine. A team of 10 makes up the Community Health Strategy and Innovations group at Truman, who visited businesses along Troost Avenue near East 55th Street, armed with information and hope.

WASHINGTON - By choosing to oust Rep. Liz Cheney from House GOP leadership, Republicans showed Wednesday they will move forward as Donald Trump's party, experts said, and Trump's myth of the "stolen election" of 2020 might as well be a plank in the campaign platform.

A GOP congressman said calling the Capitol riots an insurrection is "a bald-faced lie." Rep. Andrew Clyde downplayed the day's violence and compared the rioters to tourists. Clyde also said the Russia investigations are "the only insurrection I have witnessed in my lifetime." See more stories on Insider's business page.

Sen. Joe Manchin will not back the For the People Act, the sweeping elections and campaign finance overhaul sought by Democrats to blunt Republican state-level efforts to restrict voting access, a spokeswoman for the West Virginia Democrat confirmed Wednesday.

The Biden administration will resume construction of the southern border wall, Fox News confirms, as the immigration crisis continues to spiral out of control. The United States Army Corps of Engineers will restart construction on a 13.4 mile stretch of the wall in the Rio Grande Valley.


Pron To Politics Transition Can Be Tough

Check out 3 planets in the evening sky this week

KANSAS CITY, Mo. - It's time to look up, Kansas City! If clouds clear enough this week, we'll have a great show of three rocky planets in our evening sky. Beginning on Wednesday, May 12, the planets Mars, Mercury and Venus will line up over the western horizon.

The Kemper announces an immersive exhibit powered by viewers' heartbeats

Thursday will be sunny; more rain on the way for the weekend

Hide Transcript Show Transcript SUNNY. OUR TEMPERATURES ARE FALLING FROM THE CURRENT 60'S DOWN TO ABOUT 55 DEGREES B 9:00, CLEAR SKIES, JACKET WEATHER, NOT TOO WINDY. WHEN SHIPS TOMORROW, MORE TO THE SOUTHEAST. ENOUGH O IT CHANGED TO MAKE THE TEMPERATURE RISE A FEW MORE NOTCHES.