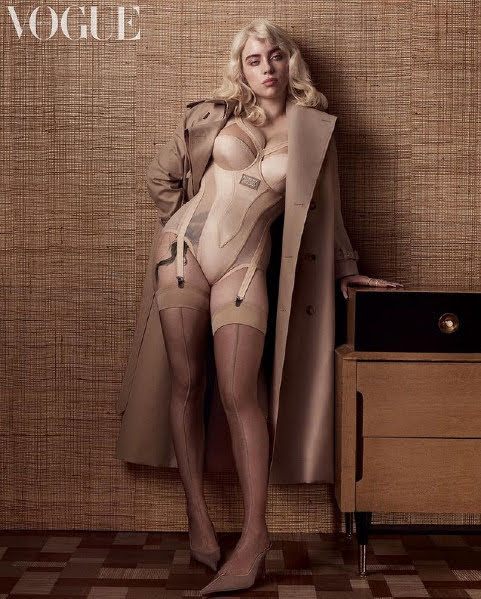 One of the most astute TKC readers notes that a rising star GenZ diva is showing off a classy look that's "very different from her green hair and baggy clothes look" which inspires us to hope for change and check out pop culture, community news and top headlines to start the morning.

INDEPENDENCE, MO (KCTV) -- As more and more of the population gets the COVID-19 vaccine, people are starting to feel comfortable gathering together once again. On Saturday, a community members came together at Susquehanna Baptist Church to remember all the lives lost in the last year.


In Defense Of Bad Tattoos

Spare Billie Eilish from your Twitter criticisms: She already knows what you're going to say. The newly blonde "Your Power" singer is British Vogue's June cover star, with the magazine showcasing the typically dressed down Gen Z pop icon sans her signature baggy wardrobe and in a whole new light.

President Joe Biden says the third round of stimulus checks, currently being distributed by the IRS, provided a financial lifeline to people who are still struggling as the pandemic maintains its grip on American life. "We've already sent more than 160 million checks out the door.

Sen. Joe Manchin says Trump 'called me all the time.' Senator said he was ready 'to stay and fight' during Capitol riots

WASHINGTON - When Sen. Joe Manchin learned a throng of pro-Trump protestors was threatening to disrupt Congress' count of the Electoral College votes in the Capitol on Jan. 6, the 73-year-old, 6-foot-3 former football standout said he was not ready to back down. "My intention was to stay and fight: 'Let 'em in.


All About The Flow

Salk researchers and collaborators show how the protein damages cells, confirming COVID-19 as a primarily vascular disease. Scientists have known for a while that SARS-CoV-2's distinctive "spike" proteins help the virus infect its host by latching on to healthy cells. Now, a major new study shows

Clients will once again be able to solicit the company of legal sex workers at Nevada's brothels as owners open the doors to their establishments this weekend after being shuttered for more than a year - longer than virtually all other businesses - because of the pandemic.

There are a few things we know for certain about the spiedini: The kebab-style Italian meat skewers beloved in Kansas City originated in Abruzzo, Italy, and the name comes from the Italian word for spit. In the early 1900s, Italian immigrants in New York were eating something they called a spiedie-a hoagie filled with beef and veal that were skewered and spit-roasted over hot coals.

To help protect their best asset - Patrick Mahomes - the Kansas City Chiefs have added eight new offensive linemen this offseason. That includes Lucas Niang and Laurent Duvernay-Tardif, who opted out of the 2020 season because of the Covid-19 pandemic. It also includes their 2021 NFL Draft.

Clouds increased late as rain showers stuck with areas SE of the metro for a few hours today. Storms develop west tonight ahead of an approaching cold front. Our timing won't be the best for severe weather, but a few isolated loud thunderstorms may be possible in the morning.

Billie Eilish - Therefore I Am is the song of the day and this is the OPEN THREAD for right now.