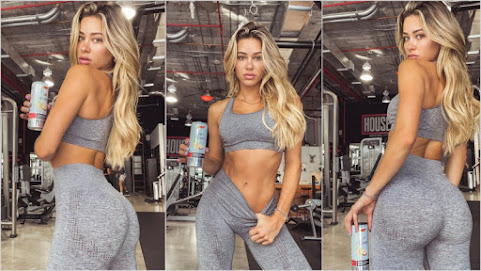 Right now hottie Cindy shows off her product placement skill and reveals that the marketing game mostly dominates social media feeds by way of clever enticement. And all of THAT inspires us to take a peek a pop culture, community news and top headlines.

The attorney representing parents of 16 students fighting for individual mask exemptions says the Blue Valley and Olathe school districts are spending $100,000 of taxpayer money defending the mask lawsuit. Linus Baker, the attorney representing parents in the case, said the mask lawsuit was moved from district court to federal court at the request of school attorneys.

KANSAS CITY, Mo. - Phase 1 of the Pfizer vaccine trials are currently underway at Children's Mercy Hospital. The trials include children 6 months old to 11 years old. For Kansas City residents Michael and Johanna Kelley, enrolling their 2-year-old daughter Nora, in the trial meant protecting her against COVID-19.

Her fans loved the share, and the post received over 19,900 likes within one hour. "You look strong and confident," one fan wrote. "Wow your attitude is so amazing," another follower chimed in, including a heart eyes emoji in the compliment. "So gorgeous!!!!" yet another added, followed by a string of flame emoji.

WASHINGTON -- President Joe Biden on Friday said that April's lower than expected job growth reveals that the U.S. economy is still struggling to recover from the Covid-19 pandemic, and that his massive infrastructure and family support bills are needed now more than ever.

Graham made the remarks in an interview with on Fox News. The comment comes as Republicans seek to remove their third-ranking House member, Rep. (R-Wyo.), from her leadership post amid her continue criticisms of the former president. "I would just say to my Republican colleagues, can we move forward without President Trump?

A federal grand jury in Minnesota has indicted Derek Chauvin, the fired Minneapolis officer convicted in the death of George Floyd, and three other ex-officers on civil rights charges. The federal indictment accuses Chauvin, J.

ELON Musk's plot to colonise other worlds may have been predicted by a German scientist 70 years ago. Writing in his 1952 science fiction novel "Project Mars", engineer Wernher von Braun described a man called "Elon" who ruled over the Red Planet.

Pink looks back on her life in the fantastical video for her new song "All I Know So Far." The song is named for and inspired by the Michael Gracey-helmed documentary of the same name, set to premiere on Amazon Prime on May 21st.

In April 1957, photographer Jerry Dantzic had an assignment from Decca Records to photograph Billie Holiday during a week-long run of performances at the Newark, New Jersey, nightclub, Sugar Hill. What unfolded was an unexpected and intimate journey into her private and public worlds.

A Kansas City, Kansas, couple has received a life-changing surprise.The couple, who is devoted to helping the homeless, saw their lives take a challenging detour. That's when a thoughtful viewer stepped up with the keys to a new path forward."This is not something that we expected at all," Rachelle Burnett said.Burnett and Danny Hagan are going places in a new wheelchair-accessible van.The pair is known for serving the homeless in downtown Kansas City each Sunday.

Jackets in hand to begin your Friday! We are starting off a bit cooler this morning with more clouds on the way for the second half of the day and a high near 67. We are tracking a 20% chance for rain today.

P!nk - All I Know So Far is the song of the day and this is the OPEN THREAD for right now.