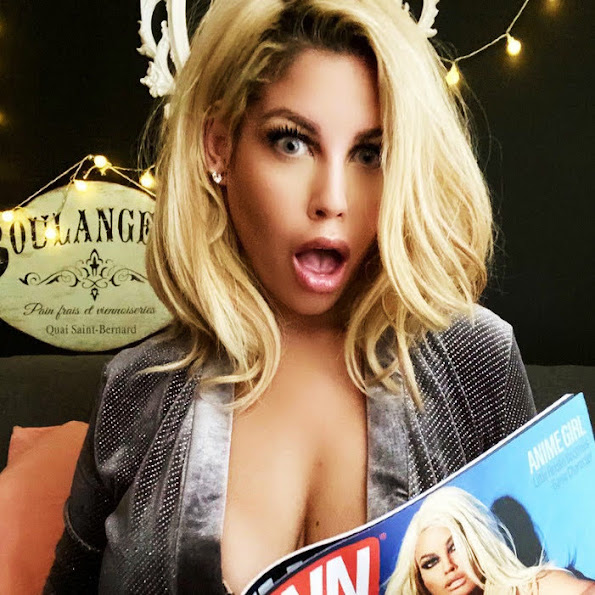 First off, traffic numbers suggest otherwise but it feels like you d-bags are sleeping on our link blasts which are the favorite function of the TKC blog and one of the few spaces where we venture out of our cowtown comfort zone.

Hottie Bridget has been in the pr0n game for more than a minute and her adult industry endurance inspires this #TBT peek at pop culture, community news and top headlines for our early morning readers.

People are getting vaccinated after KC ends emergency order

JACKSON COUNTY, MO (KCTV) -- We've seen vaccination sites across the KC metro many times, but this time around it was at the National WWI Museum and Memorial. Many rolled up their sleeves to get vaccinated. No one was happier than Edwin Rucker, but he wasn't always so ready.

Milhaus, one of the city's most prolific apartment builders, is pursuing a 224-unit project in the Volker neighborhood on what's now a parking lot across State Line Road from the KU Med campus. The proposed Jamestown Square development would be located on what's now a large surface lot serving businesses along 39th and Bell streets including Blue Koi, Jimmy's Jigger and Genghis Khan Mongolian Grill.

KC utilities team up for assistance event, drawing a crowd

KANSAS CITY, MO (KCTV) - The COVID pandemic may be waning in terms of hospitalization and deaths, but it has left a lasting financial impact on a lot of people. That's one reason why Kansas City's three utilities are teaming up for events bringing all them to one place where people can sign up for assistance.

COLUMBIA, MO (KCTV) -- Today, the University of Missouri Board of Curators approved a plan to increase tuition at all four of their campuses. The plan itself was presented back in April. The increases are between 2% and 5%. This is below the current rate allowed by Missouri law, which is 9.1%.

Israel and Hamas militants in Gaza pursued further cross-border attacks early on Thursday after Joe Biden called publicly for progress towards a ceasefire and Benjamin Netanyahu vowed to continue military operations until "quiet and security" is restored.

Democrats And Republicans Square Off Over House Mask Mandate

The debate over masks has returned to the House floor. As an increasing number of Republicans express frustration that they have to continue to wear masks on the floor of the chamber, a GOP-led resolution to change the House's guidance on masks was tabled on Wednesday evening.

Jill Biden said Kamala Harris should "go f-k" herself after famously questioning her husband's record on race during a Democratic primary debate, according to a new report. The future first lady fumed to supporters after Harris, who is now President Biden's vice president, slammed his record opposing federally mandated interracial busing to desegregate schools.

Salma Hayek is opening up about her battle with Covid-19.

Bitcoin's 40% crash 'does feel like capitulation,' says crypto specialist, but here's where the next crucial support level stands

Crypto markets have shifted from buy, buy to bye, bye bitcoin, in a nanosecond, and technicians say that the digital asset may have more room to fall in the near term as a monthslong bullish trend unravels. Prices for the world's most popular digital asset had broken below a number of levels viewed as support for the asset, including $42,000.

Matthew Perry slurred his words and had a thousand-yard stare in a video to promote the much-anticipated "Friends" reunion - leaving fans worried about his well-being. A clip showing the 51-year-old actor with an odd gaze and a labored speech pattern was posted to People magazine's website and YouTube on Wednesday to promote the HBO Max special, which was shot in April and will air May 27.

The Great Read The mainstream narrative is that a pop star ripped up a photo of the pope on "Saturday Night Live" and derailed her life. What if the opposite were true? Sinead O'Connor's memoir, "Rememberings," recasts the story of her career from her perspective. Credit...

Heard the Buzz About Society and the Scarlet Room Coming to The Crossroads? - In Kansas City

Just in time to ditch your masks, the Crossroads is gaining two new noteworthy residents this Friday: Society and the Scarlet Room. The dual bar and restaurant concept will offer elevated craft cocktails and a modern menu amid a sprawling social scene. Society promises an art-forward cocktail experience that provides a modern, upscale setting for...

A reborn team calls for classic merch. The new Kansas City Monarchs of KCK are issuing apparel that nods to the historic Negro Leagues team of the same name that played at Muehlebach Field a century ago. The classic red-lined pinstripe jerseys or the cardinal and navy interlocking KC caps both have a timeless look that also feels contemporary.

Kansas City, Kansas, businesses offer incentives to those who are vaccinated

KANSAS CITY, Kan. - Wyandotte County leaders held off lifting the county's mask mandate until May 27, after a contentious meeting on Monday. One concerns health officials raised was the county's low vaccination rate. Currently, seven out of 10 people have not received the vaccine, which is one of the lowest rates in the metro.

KANSAS CITY, Mo. - While many of the restrictions from the pandemic are slowly fading away, one crisis brought on by COVID-19 is still surging. Some pet owners are unable to provide a home for their dogs and cats.

KANSAS CITY, MO - The Red Cross and other blood donation organizations are working to bolster the country's blood supply as the pandemic wanes. Those who give blood, platelets or plasma through the Red Cross in May will be entered for a chance to win a travel trailer camper that sleeps five from Suburban Propane.

OVERLAND PARK, Kan. -The Overland Park Community Development Committee will soon issue a Request for Proposals for the Downtown Overland Park Farmers Market. In the next few months, developers will submit proposals to build possible apartments in the parking lot of the farmers market at 7950 Marty Street.

After shutting out the Brewers in Game 1, Kansas City used a late rally and came away with a 6-4 win - completing a two-game sweep over Milwaukee. Brad Keller took the bump with the hopes of replicating his previous two starts. However, as it's become common, the right-hander struggled in the top of the first.

Scattered showers and a few rumbles of thunder are likely during the evening hours with a few of the storms capable of producing brief heavy downpours. While severe storms are not likely a few of the storms could be strong so be aware of that possibility if you are planning on venturing outside.

Billboard #1 in 1981 Kim Carnes - Bette Davis Eyes is the #TBT song of the day and this is the OPEN THREAD for right now.