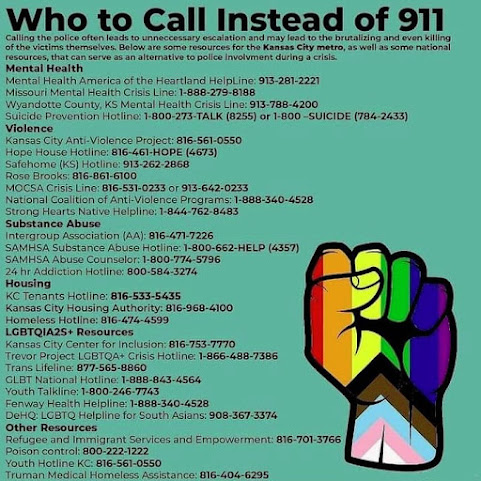 Many Americans fear that a historic jury decision to lock up a former police officer after a horrific killing won't mitigate racially charged discord, violence and partisan animosity which continues to plague the nation.

This headline and report sums up the continued debate:

AP: 1 verdict, then 6 police killings across America in 24 hours

And so the crisis continues to play out amongst local social media activists who recently shared a sketchy proposition with locals.

This week an interesting meme circulated among our progressive friends in Brookside . . . A listing of Kansas City alternatives to calling the police earned quite a few likes, shares and glowing endorsements.

A quick survey of the resources noted reveals no less than three defunct organizations.

More to the point . .  The vast majority of these groups don't answer the phone at 3AM.

Don't get it twisted, TKC loves locals sharing information and resources . . . And I certainly don't want people calling me for help. But the info offered won't really assist anyone searching for a true "alternative" to police.

Sadly, even one of the boldest American civil rights leaders has shared skepticism regarding some of the most progressive efforts targeting po-po.

MSNBC's Sharpton: Defunding police 'something a latte liberal may go for'

Confrontation with law enforcement seems to be at the forefront of the American cultural zeitgeist in what is already an exceptionally violent year. Here's another example out of many . . .

The surprisingly popular local meme is merely one component of the persistent movement to abolish/defund police that has been largely rejected by most voters but continues to earn consideration from younger protesters and activists.