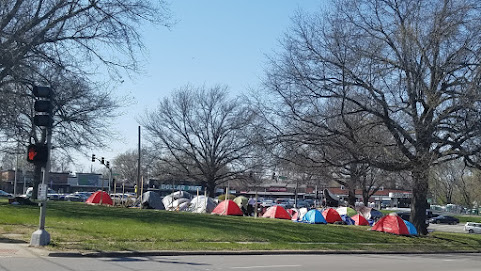 Springtime has inspired a renewed spirit of hope in for homeless protesters in midtown Kansas City.

In the aftermath of a bold protest on the city steps . . . The warmer evenings have allowed cars to drive on to the territory claimed by the homeless activists in order to provide power and food. Over the past few nights we've noticed an open air movie exhibition that seemingly hopes to build camaraderie amongst this rag-tag group of demonstrators.

Meanwhile, nearby small biz are begging local politicos to step in and negotiate a solution to no avail so far. 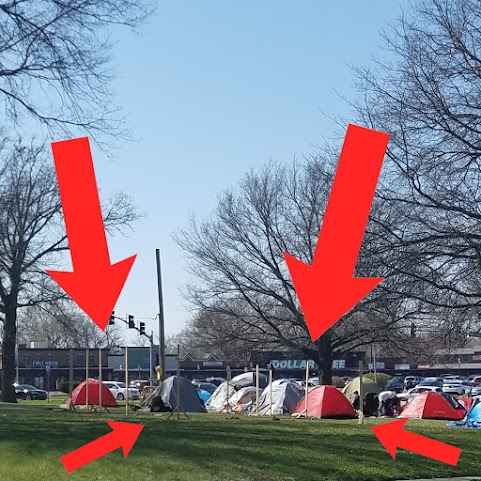 The posts look semi permanent and so far there is no excavation in plain sight.

However, with the "protest" more than three months running . . . Local merchants have abandoned hope that any solution to this growing crisis will manifest itself in the near future.

Thanks T, I'm building a home addition and have been haggling with an inspector for two weeks.

I'm going to print out this post and shove it in his face if he tries to shut down my project again.

Let's call it the annex because that's what they're doing to Westport. Good for them!

We need a more deadly virus.

Westport is dead. If you own a business or a home here, move the fuck out while you still can. Thank Mayor Q for this bullshit.

Maybe eric the fag should ask Seattle and Portland how well things worked out for them, it didn’t and it’s still a major problem for them.

This is just the beginning of the end for killa kc, I really think a recall is in order now, the mayor and clowncil are putting peoples lives at risk by ignoring any public health and safety laws on the books, law and order are over and done with is kc.

Mayor lickass has lost all control and he needs to be thrown out of office, and his big announcement that he’s running for senate just took a hit.

Has Mayor McYogapants chimed in yet? True, it's an actual issue instead of a selfie, so he may not be interested.

Hopefully Dollar Tree locked the doors until the bums leave.

The homeless are not "bums" or "hobos", they are us.

Most Americans are one medical bill away from being homeless.

It's time for "conservatives" to stop proving to us how mean & hateful they are, & start treating their fellow Americans with a little more compassion.

^^^ then you should let them live with you.

Hey blieron, most hobos and bums have alcohol and drug problems along with mental issues, people that lost their homes aren’t living under a bridge, just how stupid are you?

If you are a normal person and are living under a bridge then you are stupid.

Byron, your bro and his wife can't stand you. Neither can we. STFU

no reason to get upset about a couple of posts

Q wants to try and get the so called "all-star" game but can't handle an illegal encampment in the Westport area.

Monday-KCMO will be eliminating the camp.

Vote NO for the E Tax. It will help these homeless in Westport.

Bi-ron fishing for some Jeffery Dahlmer roomates ? as that is exactly what your post implies. BTW- Conservatives give more benevolent money than liberals. You might want to fact check basic shit before you post endless idiotic replies. You don't give shit, just endless typing of fecal matter thoughts. All the people wanting endless save the world change should start with adopting one of these people and becoming FULLY RESPONSIBLE for their care and costs. Maybe Bi-ron should go down to KU med center and offer to pay the next random patients bills. Ps dicksmack - I have paid the bills of people I don' even know and never met. Difference of "values" vs typing.

Homeless camps are excellent place to find a spouse. No need for emailZoom) brides/grooms from other countries.

They're all adults, and as such are responsible for taking care of themselves. I'm all for helping the involuntarily, temporarily homeless, but the bums are on their own.

There is a very old saying, "Beware of Beginnings." It's probably too late.

Byron, even your family hate you. STFU. Try finding somewhere they give a shit what you say.

The mayor really needs to do something about this. I wonder why he won't address the issue.

With all the empty lots in K.C.MO BUILD THEM small houses ..You are spending 75 thousand a year per illegal,

It's a regional problem. Rural Counties in Missouri incarcerate what they consider their low use population and they end up in Kansas City or St Louis sleeping in the parks. Mid America Regional Council (MARC) passes off statistical data to the Brookings Institute who processes the information and returns it to MARC. MARC then writes the narrative for local politicians as to why they are helpless against the homeless crisis created by the State Of Missouri with cooperation of the Federal Government via "States Rights". Medicaid Expansion is blocked by Gov "Hee Waw" Parson. Now we see how racism and prejudice against women, immigrant women, People of Color and anti LGBTQ folks end up with encampments as protest.