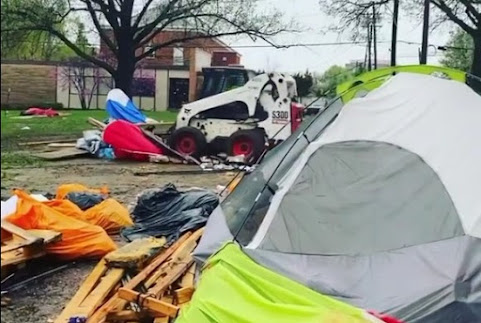 Right now activists are sharing images of this small bulldozer clearing Westport land of a homeless protest site. Demonstrators argue that Mayor Lucas betrayed his promises to the group.

In a publicly shared post, here is a portion of their statement:

"KC Public Works and KCPD just arrived at Camp 6ixx to start the sweep of over 50 residents’ homes. Most residents have been temporarily relocated while a few remain. Almost all residents wanted to stay until they were threatened with arrests and displacement. Camp 6ixx is the people, not the location. We will rebuild this beautiful community and continue fighting for housing justice."

Mayor Q responds and argues a bit with the group, here's the main takeaway . . .

"When I was there yesterday everyone I spoke to wanted to go to a hotel for 90 days, so long as they knew the opportunity existed for the others in the community and it wasn’t just a short-term offer, but instead provided a path to long term housing and services and jobs—which it does. I also have not heard of any threats of arrest. If there were, please share any video/audio of it since I know I have been recorded every time i’m there. I assume it would be the same with any law enforcement interaction. I would like to get to the bottom of it if there was. That’s exactly the opposite of everything I know I’ve worked on this week."

Via Twitter the mayor offered a cryptic update and a nice sentiment that doesn't offer much insight into today's outrage.

Homeless activists accuse city hall of betraying promises that assured against forced removal whilst the mayor defends his offer of free hotel shelter and help for denizens of the camps.

CRITICS OF HOMELESS COMPROMISE PREDICTED INEVITABLE CRITICISM AGAINST THE MAYOR FROM ACTIVISTS WHO DEMAND MORE RESOURCES!!!

The homeless are calling the move a "sweep" despite the Mayor's protestations.

The only thing for certain is that Kansas City's homeless crisis persists and a recent free hotel room deal doesn't come close to solving the problem.

Erin said…
There was rampant drug use and mental illness at the camps. They didn't need hotel rooms, they needed much more help than that.
4/10/21, 12:07 PM

Anonymous said…
Well it's a step in the right direction. The ones that truly want to get out of their situation can do so in a neutral zone for fear of losing their belongings by locking a door which is empowering if you have to sleep with one eye open. That may be an incentive to want better for themselves. They may be easier to help with services provided by advocates if they can be helped by one on one basis. The rest of them will go back to the areas they can do the drugs and self medicate without interference. They want the hand out. They love all the enabling advocates they can get without having to change a thing. Good for you Mr. Lucas! Finally remembering you have to please the taxpayers that built this city. Not the bleeding hearts who will be drained by the gimme something for nothing movement cause I'm a victim crap.
.
4/10/21, 1:03 PM

Bri said…
Little Mayor Yogashorts is gonna be covered in fleas and feces. This is what happens when you negotiate and cave into trash. Anything to wipe the smirk off that ugly face of his. He's going down. It will be fun to watch.
4/10/21, 1:27 PM

Anonymous said…
Open up Arrowhead Stadium for the hobo's.

Arrowhead Stadium is taxpayer funded and not being used right now. Huge locker rooms with showers for the hobo's to bathe each day.

Use the concession stands to feed the hobo's and they can sit in the warm suites and watch NFL highlights and Oprah on the Jumbo Tron.

Clark Hunt and the NFL Players are about being social activists so they should support using Arrowhead Stadium and their locker rooms to help the homeless.
4/10/21, 1:46 PM

Anonymous said…
Make no mistake about it folks, the police and public works were ordered by somebody to do this, I wonder who the culprit is? Was it someone on the police board? Was it city clowncil who have ignored the whole thing?

Anonymous said…
KC Tenants call Quinton a liar pretty much daily on Twitter and he falls head over heels to meet their demands every time. They're never going to like you bro.
4/10/21, 2:00 PM

Ritchie said…
^^^ they aren't willing to coddle the homeless like everyone else. They activists got their three stuff, they need to get out of the way of people who work and pay taxes to support them.
4/10/21, 2:03 PM

Bri said…
2:02 we all know that you bleeding heart, jobless types are the worst people on the fucking planet. Fuck off.

Anonymous said…
Sorry, it's the mayor's job to fix problems. We have the right to call out the obvious incompetence some people voted for.
4/10/21, 3:06 PM

Anonymous said…
That does it, I’m reporting lickass to joe bidumb for wasting money on stupid shit.... wait, what? 2.9 trillion dollars for infrastructure and only five percent actually goes to roads and bridges? Never mind.
4/10/21, 4:02 PM

Anonymous said…
What kind of moron thinks infrastructure is only roads a bridges.
4/10/21, 4:19 PM

Anonymous said…
this truly has to be the absolute worst mayor in recent memory and that goes back a ways for me! unfortunately he is listening to people who dont care about the city! sad state of affairs in Kansas City!

Anonymous said…
get a letter almost every 2 weeks asking if i want to upgrade my services and bundle my internet with tv service. to watch movies or series i hook up an HDM1 cable to my tv.
4/10/21, 6:17 PM

Anonymous said…
Dumping my house. the beginning of the end for Minneapolis was when they began to subsidize the "unhoused." SLOTH!
4/10/21, 9:13 PM

Anonymous said…
Minneapolis was the best major city in the United States in the 1990's and prior.

The City's demise was when Obama immigrated and settled 40,000 radical Muslim Somalians into Minneapolis and ruined the city.
4/10/21, 9:32 PM

KC said…
Why hasn't the mayor forced the Fairmont Hotel to open its suites for the homeless. Charge the city for use of the mini fridges in the rooms.
4/10/21, 9:48 PM

Bri said…
9:32 AMEN. I remember when Minnesota was a great state and Minneapolis was a city people flocked to. It's all dead now thanks to the terrorist Barack Obama and his muslim scumbag friends.
4/10/21, 10:24 PM

Anonymous said…
My heart goes out to anyone who is homeless however what the mayor did will not help them. They need serious mental health care and most likely lifelong, long term use of psychiatric medications. A 90 day hotel stay will not help them, in fact it will make things worse for them and cause a slew of other problems in the process.
4/10/21, 10:59 PM

Anonymous said…
Ship them to California. It would cost us less, they'd have better weather and they can join all the other nuts.
4/11/21, 12:29 PM

Anonymous said…
Bri, your name is pronounced the same name as Brie, a moldy, lumpy, soft cheese without much flavor and even less character. A fitting name for you.
4/11/21, 2:31 PM