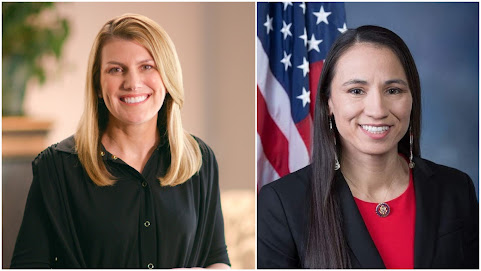 Make no mistake, even the most diehard progressives knows that a "red wave" is coming in 2022.

Even as Democrats took back the White House, Senate and Congress in 2020 . . . Here in the Midwest the GOP dominated and the Democratic Party actually LOST ground despite having Prez Trump to play the boogie man.

Normally, Congressional candidates get stronger as they go along but Rep. Sharice won't have that luxury in traditionally red state Kansas.

What we hope is that this time around Amanda Adkins will push back against provincial Kansas political advisers and won't be afraid to show voters that she is EXCEPTIONALLY SMART, bold and highly skilled. Pretending to be a meek housewife cost her the election last time because the pose didn't allow her to connect with real life lady voters who aren't as simple as polling research suggests.

Instead, in the upcoming vote she has a chance to run on POLICY over politics. And yes, there's a very good chance she can win.

The only thing that can ruin it for her are troll GOP supporters who can't control themselves and will allow and inspire Rep. Sharice to play the victim . . . Another obfuscation given that the progressive is a member of the elite and truly successful and powerful young politico.

Adkins formally re-launched her campaign for the U.S. House Representatives on Monday, posting a nearly two-minute ad that features Mike Pompeo, who served as U.S. Secretary of State under former President Trump.

“We need more common-sense conservative, female, business-minded voices in Congress,” Adkins said in a statement announcing her 2022 candidacy. “I want to represent the people of the Third District in Washington to get things done, end the gridlock and solve the problems that people are facing with their families every day. My experience as a business leader, mother, and community champion for solutions in healthcare will bring perspective missing in Washington. I believe the government’s role should be providing economic lift to a region, not furthering dependency on the government for generations to come.”