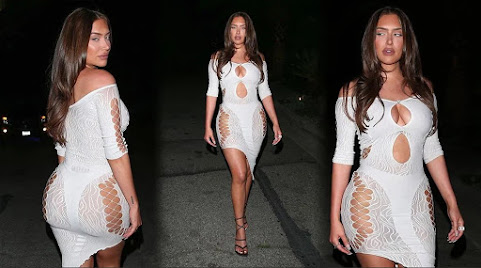 Tonight we take a peek at the online news cycle as famous friends of celebs show their off their curves in order to garner a bit of attention. And that classic gambit inspires our peek at community news, pop culture and top headlines.

by: Juan Cisneros Posted: / Updated: AUGUSTA, Ga. - Round one of the 2021 Masters Tournament teed off on Thursday and a notable face was seen in the limited crowd allowed at Augusta National Golf Club. Kansas City Chiefs quarterback Patrick Mahomes was seen walking around the course and even posed for pictures for one of his sponsors Adidas.

KANSAS CITY, MO (KCTV) -- While some shops are struggling to stay afloat during the pandemic, others are thriving. After the death of George Floyd sparked a racial justice movement, there's been a greater spotlight on Black owned businesses. One local entrepreneur saw an opportunity to bring something new to the city of fountains.

She is best known for being Kylie Jenner's BFF. But Anastasia 'Stassie' Karanikolaou was making sure she was the centre of attention as she headed for a night out at Craig's in West Hollywood on Tuesday night.

And Potential Republican partners such as Sens. (R-Ohio) and (R-W.Va.) have slammed Biden's proposal for going "far beyond" the traditional definition of infrastructure. It's not clear how much Biden is really focused on winning GOP support. In the Senate, Democrats are expected to use budgetary rules that would allow them to move the package with no Republican votes.


Nothing Conservative About Prez Trump Cash Contest With GOP

Who among us hasn't signed up for a free trial intending to cancel before being charged, only to face the financial consequences of forgetting about it for weeks? What if these inattentive spenders, slowly bleeding money, never knew they had subscribed in the first place?

Joel Greenberg, a key figure in the ongoing investigation into Florida Republican Rep. Matt Gaetz, is likely to strike a plea deal with federal prosecutors, his attorney and prosecutors said in court Thursday.

Vladimir Putin was reportedly so angered when President Joe Biden called him a "killer" in his first sit-down interview after taking office, the Russian president left his quarantine, got a COVID vaccination and moved 28,000 Russian troops to the border with Ukraine.

Meow. On Wednesday, Britney Spears posted a playful Instagram video trying on various outfits, including a sexy, sheer leopard-print catsuit. The velvet-and-mesh body stocking comes from Yandy, the brand best known for its lingerie and sexy Halloween costumes, and retails for $49.95. "Found my cat suit," the pop star, 39, captioned the video.

Brad Keller entered this season as the unquestioned ace of a Royals staff that looked, on paper, to be a budding strength. And it was well earned. In the 360.1 innings he has pitched in since he was brought to Kansas City in the Rule 5 Draft, Keller has posted a 131 ERA+.

A new program aims to provide paid internships and employment to 10% of Kansas City youth. // Image courtesy of KCMO In collaboration with Hire KC, Entrepreneurship KC, and KC Common Good, Mayor Lucas intends to provide employment opportunities to 500 youth who live east of Troost this summer under a new Working For Youth initiative.

Friday will be warmer with more sunshine

Hide Transcript Show Transcript PORTIONS OF MISSOURI 51 PROBABLY FOR THE NEXT FEW HOURS OR SO. WE'LL TRY TO DRY OUT BY 10 OCLOCK. BUT AS YOU SAW FARTHER NORTH YOU GO. LOOKS LIKE THE RAIN SHOWER IS GOING TO HOLD ON TO YOU AND THEN ABOUT 50 DEGREES FOR THE EVENING LOW TEMPERATURES BY TOMORROW.

Your Hero Mchomie better stick to playin ball, as he the poster child for how not to wear a mask and how to spread Covid. Your hero. Now bitch about your taxes, followed by Covid.


The black pantry???? That's racist. this is all about putting whitey out nothing more. When people cry racism like all of the BLM people that's a sure sign that they are the racist ones. So black people in my opinion can keep to themselves and leave whitey alone. You people wanted division and followed Obama's hate whitey so now you've got it.

@6:36-easy Boomer. Really nobody wants anything to do with you because you reek of geriatric shit and are a horrible person. that's why you're here. Stay on TKC and do us all a favor and never leave your rented trailer. OK Boomer?

Thought that model was Bruce Jenner

This is the guy that the Feds will use to build their case.

“Greenberg was arrested in 2020 on stalking charges after he allegedly faked documents and social media accounts to frame a political rival as a pedophile and white supremacist.”

Now the Feds are piling on charges to force a plea deal to try to take down Gaetz, their real target. They are running the same playbook they ran with the bogus Russian collusion investigation. This is a dirty, politicized prosecution that would make Stalin proud.