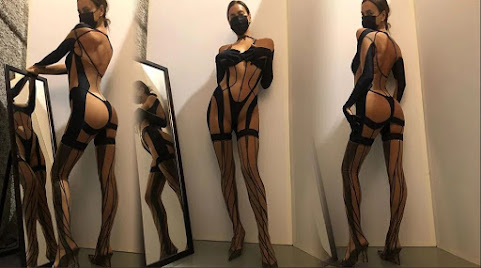 Recently, 35-year-old hottie Irina shared a pandemic spin on the body suit and her foray into the old school world of ladies skivvies inspires this quick look at community news, pop culture and top headlines.

The Kansas City Fire Department said that nearly 80% of all calls to 911 involve a request for medical service. Authorities said that many of those do not require an ambulance or a trip to the hospital. That is why the department has started a new Community Medical Response Team to provide health care and more when needed."We have about 10 so far (who) called us about 100 times last year," said Michael Latta, a Kansas City Fire Department division chief.

JOHNSON COUNTY, KS (KCTV) -- The driver of a pickup that got hit by a train early Thursday morning is fine, Johnson County authorities say. A pickup got stuck on train tracks near 175th Street in Johnson County, near Olathe, around 2 a.m. overnight, before the collision.

KANSAS CITY, Mo. - The Kansas City Public Library has at least 13 openings for library assistants. The positions are part time, scheduled for about 20 hours per week and pay roughly $13.00 per hour. And for those who love to help people but think a library might be too quiet of a place - think again.

Irina Shayk bares it all in sexy see-through Mugler catsuit

Irina Shayk is one hot mom. One week after joining Bella Hadid and Hunter Schafer on the runway for Mugler's Spring 2021 virtual fashion show, the model shared behind-the-scenes photos of one of her looks: a see-through catsuit with a built-in thong and back cutout.

President Biden is set to unveil his first attempts to curb gun violence on Thursday, announcing a set of modest moves designed to begin revamping federal gun policy by tweaking the government's definition of a firearm and more aggressively responding to urban gun violence.

How Derek Chauvin's trial is bringing down the blue wall

During his lengthy testimony Monday, the chief of the Minneapolis Police Department minced no words in condemning the actions of Derek Chauvin, the former officer who is charged with murder in the death of George Floyd.

Manchin: 'No circumstance in which I will vote to eliminate or weaken the filibuster'

WASHINGTON - Sen. Joe Manchin reiterated his opposition to eliminating the filibuster on Wednesday, dimming hopes for changing the contentious rule. In an opinion piece published in Wednesday in The Washington Post, Manchin, D-W.V. cautioned against ousting the voting procedure to keep the majority party from bypassing minority opinion in enacting legislation.

Rep. Ilhan Omar ripped President Joe Biden for his administration's reported plans to resume construction on parts of the border wall. "It's shameful and unacceptable for @POTUS to continue the construction of Trump's xenophobic and racist wall," Omar tweeted Wednesday.

Paris Hilton is linking up with none other than Danielle Bregoli -- AKA Bhad Bhabie -- over an issue that's near and dear to both lately ... alleged abuse at troubled teen camps.

KANSAS CITY, Mo. - A Missouri woman is working to make medical marijuana licenses more accessible for all people. Missouri voters legalized medical marijuana back in 2018. Since then, the state has issued hundreds of licenses to operate grow-houses, testing and manufacturing facilities, as well as dispensaries.

KANSAS CITY, Mo. - A Kansas City, Missouri, nonprofit received $85,000 to further its mission of preventing homelessness and assisting those experiencing homelessness. Healthy Blue presented the funds to reStart on Wednesday. Shamika Hogan, reStart's director of development, said in a news release that the need for emergency assistance and shelter "continues to increase" due to the effects of the COVID-19 pandemic.

We are tracking a 60% chance for scattered showers off and on most of the day. Grab the rain gear and some warmer layers. Today will be the coolest day of the week with highs in the low 50s.

Billboard #1 in April 1981 Blondie - Rapture is the song of the day and this is the OPEN THREAD for right now.