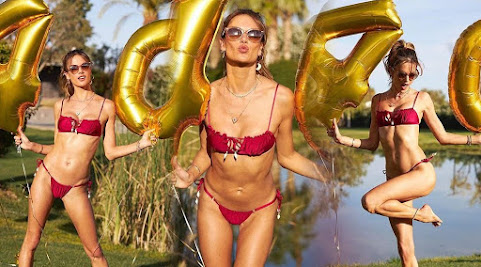 For the midday we start #TBT inspired by hottie Alessandra and her enduring body of work that inspires this peek at pop culture, community news and top headlines.

If you've driven by Martini Corner lately, you may have spied The Black Pantry-a new shop in burgeoning Midtown. The store, which is set to fully open this Saturday, is a collaboration between owner Brian Roberts and the squad at Made in KC. Roberts's new store features an eclectic blend of local Kansas City products...

KANSAS CITY, Kan. - Last year, KCKPS lost 22 students - 11 were due to gun violence and other students died from overdose or suicides. It's the reason why the district launched its "Enough is Enough" initiative to stop what's happening and find solutions.

Missouri's Republican-led state House on Wednesday advanced a proposal to make daylight saving time permanent. Lawmakers in a voice vote gave the bill initial approval. It needs another full House vote to move to the Senate for consideration. Federal law prevents states from moving to daylight saving time permanently, so the Missouri bill would only take effect if Congress changes federal law.

The Victoria's Secret model, seen in swimwear for fashion label Lascana, marked the milestone by holding up golden balloons for an online pic. Brazilian Alessandra told her 10million Insta followers: "Celebrating this beautiful journey. "Feeling grateful for all the amazing opportunities and experiences and most of all for everyone that has enriched my life.

The Biden administration on Thursday leveled an array of sanctions against the Russian government for its attempted interference in the 2020 U.S. election, occupation of the Crimea region of Ukraine, and other malign activities by Moscow.


More Deets On Speaker Vs. AOC

Pelosi mocked Ocasio-Cortez and the Squad by talking like a baby: 'See how perfect I am and how pure?'

Nancy Pelosi criticized Rep. Ocasio-Cortez and other members of the left wing "Squad" for posing as "perfect" and "pure" progressives. USA Today's Susan Page writes in her forthcoming book that the House Speaker told her some members "pose for holy pictures" while others legislate.

Democratic politicians on Thursday unveiled their plans to expand the US Supreme Court from the current nine justices to 13 - a proposal that has been roundly criticized as "court packing" to meet political needs. "We are here today because the United State Supreme Court is broken," said Massachusetts Sen.

Unemployment claims likely resumed their decline as the U.S. economic revival picked up speed. Economists surveyed by The Wall Street Journal expect that the Labor Department will report that jobless claims, a proxy for layoffs, fell to 710,000 last week from 744,000 a week earlier.

MISSION, Kan. - A lost dog from Kansas City, Kansas ended up at a pet rescue in Mission and the owner says she's having a hard time getting her dog back. The owner of the dog named Capone, who is at Unleashed Pet Rescue, got loose a couple of weeks ago.

KANSAS CITY, Mo. - Blood donation centers are sounding the alarm on low blood supply and asking people to consider donating. According to the Community Blood Center in Kansas City, they're facing a chronic blood shortage connected to the pandemic. Spokesperson Chelsey Smith said the center currently has a five-day supply of blood compared to their average seven-day supply.

DRESS AND GET A FEW LAYERS AT KAUFFMAN STADIUM. 36 DEGREES, DRESSED IN LAYERS THIS MORNING, AND THE WARMER COAT, TRUSTEE CONDITIONS ACROSS THE METRO AND A FREEZE FROM ST. JOSEPH INTO MARYVILLE. ADDITIONAL FROSTY DAYS ON OUR FIRST ALERT 9 DAY FORECAST FOR NEXT WEEK.

Billboard #1 for this week in April 1991, Londonbeat - I've Been Thinking About You is the #TBT song of the day and this is the OPEN THREAD for right now.