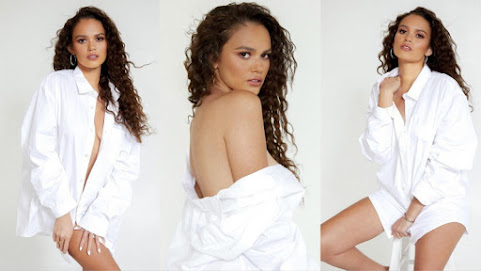 Actress and insta-hottie Maddy has has set social media buzz with her casual pix she's sharing and all of THAT inspires this peek at pop culture, community news and top headlines.

Friday was a day to celebrate at Truman Medical Centers/University Health."I knew it was the right thing to do and I always follow my gut," Chris Hendrix said. Hendrix was patient No. 100,000 to get the vaccine at the hospital.

KANSAS CITY, Mo. - The Kansas City, Kansas, Public School District has a new superintendent. In a unanimous vote Friday afternoon, the KCKPS Board of Education announced Dr. Anna Stubblefield as the district's newest Superintendent. Stubblefield, who will start in her new position on July 1, replaces Dr. Charles Foust following his resignation in 2020.

One to Watch: Madison Pettis Embraces Her Natural Coils and Wants You to Do the Same

Madison Pettis has grown up right before our very eyes. Madison's career is nothing short of legendary, working with heavy hitters like The Rock, Miley Cyrus, and Will Smith. Now, she's taking centerstage and making a name for herself with roles in Netflix's He's All That, Five Points and American Pie Presents: Girls' Rule.

Vice President Kamala Harris hasn't been to the border to address a crisis she was tasked to help fix - but a children's book she wrote is waiting there for young migrants who are being welcomed into the country.

Why Biden's Armenian Genocide Declaration Really Is a Big Deal

Every American of Armenian descent - indeed, every Armenian in the global diaspora - lives with the ghosts of the Armenian Genocide. We learn the harrowing family stories at an early age. We're shown photographs that we can never forget. The soundtrack to our lives is Der Voghormia, the haunting liturgical hymn "Lord have mercy."

Caitlyn Jenner after being misgendered on 'The View': 'California has bigger issues than pronouns'

Caitlyn Jenner responded to "The View" co-host Joy Behar Josephine (Joy) Victoria Behar Ivanka Trump gets vaccine, urges public to do the same Fox News's Dean says 'View' won't book her over Cuomo criticism Meghan McCain and Joy Behar argue over whether antifa 'does exist' MORE after the daytime talk show figure repeatedly misgendered her on Friday, telling her not to "sweat it" and focusing instead on her gubernatorial bid.

Federal health agencies say they are ending their recommended pause on use of Johnson & Johnson's Janssen vaccine, following the vote of a panel of advisers to the Centers for Disease Control and Prevention on resuming the single-shot vaccine.

The risk of being exposed to Covid-19 indoors is as great at 60 feet as it is at 6 feet - even when wearing a mask, according to a new study by Massachusetts Institute of Technology researchers who challenge social distancing guidelines adopted across the world. MIT professors Martin Z.

"What makes it powerful is when you have somebody else who is willing to be as open as vulnerable, as truthful as they were," Oprah said about her March 7 interview with Meghan Markle and Prince Harry During their March 7 interview, which aired on CBS in the U.S., Meghan and Harry accused the royal family of racism, including "concerns" over their son Archie's skin color and not getting Meghan help when she felt suicidal.

In Italy, an 'Act of War' Over Espresso

(Newser) - Coffee is serious business in Italy, and espresso in particular. Drinking it "is a way of life," per a post at euronews. No big surprise, then, that the nation is seeking to have its espresso tradition enshrined as a unique cultural treasure by a UN agency.

The LGBT Sport Podcast - The One with Justice Horn - BBC Sounds

Warm, sunny for your Saturday

YOU JUST CAN'T SEEM TO ESCAPE THAT 65 WILL BE THE HIGH AND LEE SUMMIT 66TH AND LEAVENWORTH 67 DEGREES IN OTTAWA 66 AND BUTLER AND 65 IN CHILLICOTHE TOMORROW. WATCH HOW THE WINDS COMPLETELY SHIFT TO THE SOUTH AND THEY PICK UP IN SPEED.

The Chemical Brothers - The Darkness That You Fear is the song of the day and this is the OPEN THREAD for right now.