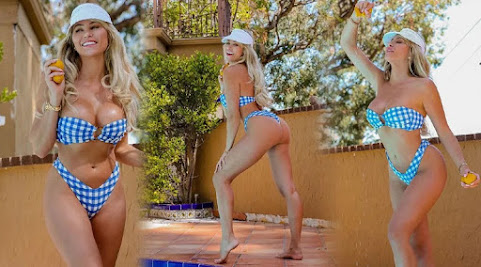 This cheeky bit of promo inspiration from hottie Khloe reminds us that the influencers are changing the ad game and cleverly leveraging their followers by way of social media thirst traps. And all of this inspires another peek at pop culture, community news and top headlines . . .

Our city's barbecue is sweet and spicy, but its history is slow-cooked

LC's BBQ of Kansas City, MO. A pit full of meat and a line of customers. // Photo by Chase Castor The year was 1869, and hundreds of people gathered to celebrate the opening of the First Hannibal Bridge, the first permanent railroad bridge to cross the Missouri River.

Khloe Terae is still strutting her bikini bod, but don't panic ... she appears to be practicing some social distancing. The model threw on a tiny pink bikini Monday in Malibu to do a photoshoot for a water company.

So far in his young presidency, President Joe Biden has been one of the best friends the stock market has ever had. Better, in fact, than any president before him going back to at least the 1950s and the Dwight Eisenhower administration, as the 46th chief executive has witnessed an unprecedented growth on Wall Street in his first 100 days in office.

The justices could issue the first major Second Amendment decision in a decade. As the nation grapples with a surge in gun violence and record gun sales, the U.S. Supreme Court said Monday it would consider whether Americans have a fundamental right to carry a handgun outside the home for self-defense.

Over the weekend, Republicans accused Joe Biden of trying to ban meat. The claim, which you've heard from the likes of Donald Trump Jr. and Texas Gov. Greg Abbot, is that Biden's climate plan will prohibit Americans from chowing down on burgers in an effort to limit greenhouse gas emissions associated with industrial agriculture.

Kim Kardashian and CNN reporter Van Jones are at the center of dating rumors, just two months after she filed for divorce from her estranged husband Kanye West. While the pair have been pals for years, fans speculate their friendship may have turned romantic as she during her four-year law apprenticeship with his Oakland-based nonpartisan organization, #cut50.

Will mask mandates finally come to an end in Kansas City this week? On Friday, the mask mandate in Johnson County will expire. County leaders have scheduled a meeting for this Thursday to decide whether to approve a new order or simply let it lapse. All signs are they are ready to let it drop.

Marta Lavandier SOURCE: Marta Lavandier Marc Anthony is set to bring his U.S. tour to the T-Mobile Center in Kansas City, Missouri, this fall.The concert will take place Oct. 9. Tickets will go on sale at 10 a.m. April 30 and will be available online.

Signs of above-average warmth in Kansas City for early May

by: Alex Countee Posted: / Updated: KANSAS CITY, Mo. - Hopefully you were able to get out last weekend and enjoy some warmer temperatures. We had highs of 68 and 76 Saturday and Sunday, and we're already close to 80 degrees midday Monday.