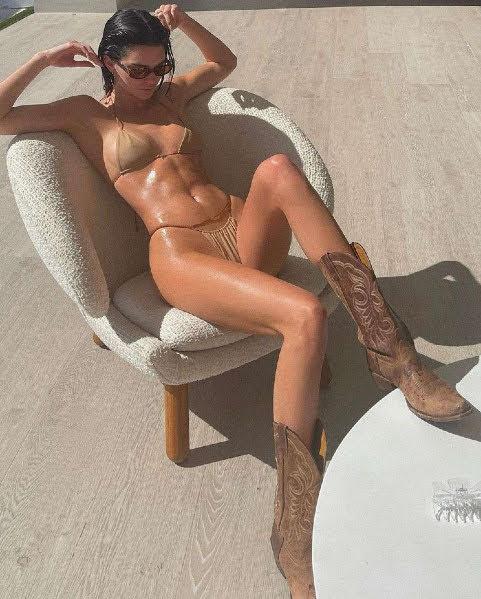 On this surprisingly steamy April day, hottie Kendall shares a bit of fashion hotness with her legion of fans and that inspires this peek at pop culture, community news and top headlines.

KANSAS CITY, MO (KCTV) -- Two people were taken to the hospital after being stabbed on Monday morning and the suspect has been taken into custody. According to the police, the incident happened in the 6400 block of College just after 11:30 a.m.

Patrick Moore is joined on this episode of the Top 5 KC podcast by Ben Wendt (Ope! Radio on The Pitch Podcast Network) and Chase Novick (Guitarist for Doglava) to pick their top 5 favorite things to do in Kansas City for $20 or less.

BELTON, MO (KCTV) -- As the trial of Kylr Yust begins, homes and businesses in Belton are showing their support for the families of Kara Kopetsky and Jessica Runions. Just off Highway 58, a backyard fence has been decorated in purple and teal ribbon -- Kara's and Jessica's favorite colors, respectively.

Few of us will ever forget the failed Fyre Festival, a 2017 disaster helmed by startup bro Billy McFarland. It had all the elements of a perfectly promoted event: Supermodels Kendall Jenner, Bella Hadid and more posed in bikinis for a sexy video promoting the festival, stars and influencers posted about it to their millions of Instagram followers, and respected media outlets legitimized it.

Minneapolis Police Chief Medaria Arradondo took the stand on Monday in the ongoing trial of former officer Derek Chauvin, who has been accused of murder and manslaughter in the May 2020 death of George Floyd. Arradondo, the city's first Black chief, fired Chauvin and three other officers the day after Floyd's May 25 death.

Dr. Anthony Fauci said in an interview released Monday that the federal government won't be mandating vaccine passports for travel and businesses. The White House has indicated that any potential passports would come from the private sector, with little direct involvement from the government.

It's his second leader, after "Old Town Road" reigned for a record 19 weeks in 2019. Lil Nas X launches at No. 1 on the Billboard Hot 100 songs chart with "Montero (Call Me by Your Name)." The song, propelled by its buzzy official video, is his second Hot 100 No.

Piers Morgan refused to back down Monday over his allegations against Meghan Markle - continuing to insist during an explosive TV interview that "the delusional duchess" lied during her famous Oprah Winfrey tell-all.

Two of Jennifer Lopez's exes, Marc Anthony and Ben Affleck, had nothing but praise for the entertainer's talent, work ethic, and business savvy. The two stars were interviewed for JLo's new profile in InStyle magazine for its May issue. Lopez, 51, and Anthony, 52, were married from 2004 to 2014 and share 13-year-old twins, daughter Emme and son Max.

After an opening series where every game was a high-octane scoring affair, the Kansas City Royals played a more traditional game of baseball against Clevelend. And thanks primarily to the efforts of Danny Duffy, who pitched six scoreless innings, and Whit Merrifield, who drove in all of Kansas City's runs, the Royals pulled out a 3-0 victory in Cleveland's home opener.

Breakfast is the most important meal of the day, and at Banksia, you can get your fill every day of the week. No matter the time of day, you can't go wrong with the bakery's pastries - croissants, lamingtons, Danish and more - but if you're looking for something a little more substantial, pick up an order of avocado toast from Banksia.

Hide Transcript Show Transcript WIND WILL CONTINUE ON INTO THE EVENING TWENTY MILES AN HOUR AT 6 PM ABOUT 15 MILES AN HOUR AFTER THAT 77 OR 6 PM TEMPERATURE, SO MAYBE DINNER OUTSIDE BUT AGAIN ANCHOR DOWN THOSE NAPKINS.