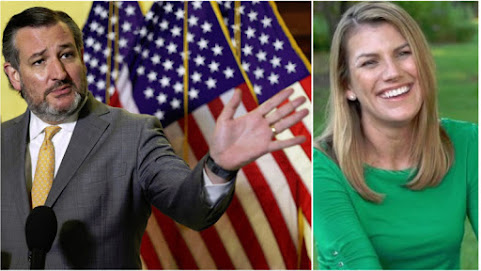 Local media politely ignoring an important bit of political news seems weird given obvious signs Kansas Republicans are ramping up their efforts to flex their strength in the upcoming 2022 midterm elections.

Full disclosure: TKC doesn't live in Kansas, won't vote in this election, almost never gives endorsements and merely keeps up with partisan slap-fighting for entertainment. I'm somewhere between a Libertarian and the angrier faction of the Green Party; sadly, the fashion choices keep me from making a decision other than a longstanding commitment to losing.

The rematch betwixt Rep. Sharice Davids Vs. Amanda Adkins will be one of the fiercest political fights confronting locals in the red state crusade to take back the Congress for the Republicans.

Remember . . . Even with Prez Trump playing the boogeyman, the Democratic Party lost ground in Congress during the 2020 election cycle.

And so, every election is crucial and this match-up is one of the most hotly contested by every account.

The nod from Senator Ted Cruz merits attention if only because he's a nationally recognized leader and a politico who takes a great deal of heat from standup comics & pundits.

We've posted news from Rep. Davids before and we will again but for right now, her main challenger dominates the spotlight despite local MSM seemingly playing favorites . . .

Overland Park, Kan. - Today, Amanda Adkins earned yet another endorsement, this time from conservative fighter and US Senator Ted Cruz.

“I’m proud to endorse Amanda Adkins for Congress. Washington is out of control. The Biden administration is working every day to increase your taxes, to take away our fundamental rights, and to try to take power away from you – from WE THE PEOPLE – and put it instead in the hands of Washington bureaucrats,” said Cruz. “We need strong principled leaders in Washington. We need someone with common sense who will bring Kansas values to the swamp. That’s why I hope you’ll join me in supporting Amanda Adkins for Congress.”

“I am so grateful to receive the endorsement of a conservative standard bearer like Senator Ted Cruz,” said Adkins. “Senator Cruz knows how critical winning back Kansas’ Third District is to taking back the majority in the House.”

Adkins won the Republican primary handily and outperformed the top of the ticket in Johnson County in the 2020 elections. Adkins recently launched her campaign for the 2022 election cycle with the support and encouragement of the former U.S. Secretary of State Mike Pompeo and his wife Susan Pompeo, as well as numerous members of congress.

Amanda is a businesswoman, mother and social entrepreneur. For the past 15 years, she worked as an executive at Cerner Corporation, a global Kansas City based healthcare and information technology company.

Professionally Amanda has advised providers and employers across the United States on how to cut healthcare costs and improve health outcomes for individuals and families. In the course of this work, she has been a leader for consideration of social determinants of health in communities (SDOH). A belief in the importance of SDOH was a major consideration when she founded Systems of Care Initiative (SOCI), a philanthropic organization dedicated to helping young children be healthy and ready for kindergarten and later success in life.

Amanda is the former chairwoman of the Kansas Republican Party, where she achieved unprecedented election success while serving two terms from 2009-2013. Amanda led a “Clean Sweep” in the 2010 election cycle winning all Federal and statewide races and increasing majorities in the legislature. Her tenure in politics is marked by promotion of women in leadership positions. Adkins is co-founder of the Dwight D. Eisenhower Excellence in Public Service Series whose mission is to prepare Republican women to seek greater involvement in leadership, government and politics.