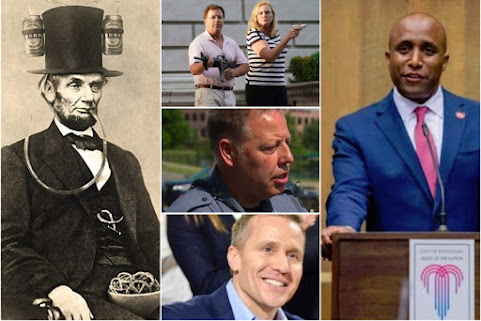 Missouri Republicans quiver with anticipation over an upcoming party in Kansas City.

Sadly, Kansas City's Mayor rained on the right-wing parade this morning by way of a social media tirade.

Take a peek at the partisan premise . . .

The mayor earned back up from his paid army of social trolls along with the newspaper. About two hours later the top cop opted out with this message . . .

“I was invited, on behalf of the police department, to be recognized for its hard work during the summer of 2020,” Smith said in a statement.

“It is becoming apparent that my attendance at the event would be a distraction.” “After careful consideration, I will respectfully decline the invitation to this event.”

It's a smart decision to skip the fight and it's not like the local lawman was going to be the life of the party.

Disgraced former Guv Eric Grietens is on the guest list along with the repellent gun-toting STL couple.

So it should still be a good time.

The event is scheduled at The Westin at Crown Center in Kansas City on June 11th.