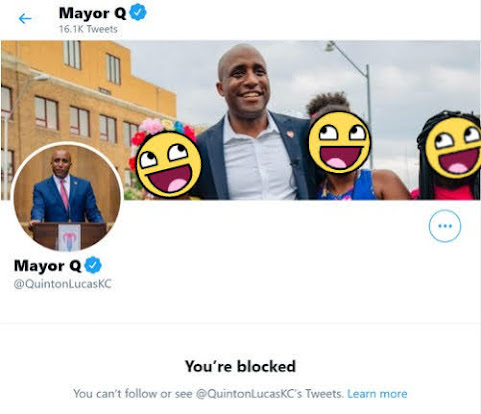 For quite some time Mayor Q displayed relatively thick skin via social media and was eager to engage in conversation with even his most fiercest detractors.

Heck, he even gave out his personal phone number to followers.

Recently a KICK-ASS TKC READERS WAS BLOCKED by Mayor Q seemingly for nothing more than agreeing with one of our dumb-ass an infrequent tweets.

To be fair, we can't blame the top politico at 12th & Oak for becoming a bit more sensitive amid the pandemic. Public health leaders have advised us to prioritize our mental health and even the most skilled elected official can only take so much abuse.

Remember that Prez Trump confronted Supreme Court push back when he blocked some of his Twitter critics.

The case law is still being written on elected officials banning followers BUT, interestingly, Missouri is at the forefront of the debate over mandated public discourse via mobile phone.

EFF: Can Government Officials Block You on Social Media? A New Decision Makes the Law Murkier, But Users Still Have Substantial Rights

Luckily, Mayor Q has yet to block this humble blog and he remains one of the most accessible politicos in Kansas City via Facebook & Twitter despite the fact that he has become increasingly inundated with culture war critics as his administration champions progressive crusades over local issues.

He was blocking people right and left during the recall.

Mayor McChimpy blocked me and several friends of mine eons ago. He can’t take any criticism. That’s why he’s purchased thousands of social media trolls to pose as his adoring fans. He’s going to implode soon.

Two Bris and I believe you both. Bitches.

In way over his head. Giving it, not using it is his forte.

Sounds like the same dickhead to me. I mean, who can tell? And for that matter who fucking cares what Britany says?

Mayor McChimpy!!! It IS you, isn’t it??? Making shit up to excuse your actions. You’ll say anything and lie through your teeth and blame everyone else for your horrible actions and monumental failures as mayor of this city. It’s hilarious how your FB page now says “political candidate” instead of mayor. You don’t have a snowball’s chance in hell of winning a Senate seat.

There goes Bri, talking to himself again.

Bri, you seriously can't think the mayor is stalking you.

Nah. Someone else brought it up. It’s either the mayor or one of his psycho buddies. I’ve been stalked and threatened by one of the mayor’s most ardent followers Ken M.) here and on the mayor’s FB page, so I wouldn’t put anything past that little creep. Besides, I know it’s you who’s asking the question, Chimpy.

The mayor has serious anger issues, I worry for the woman and the baby, he’s an abusive asshole and will probably hurt or kill both of them.

It’s only a matter of time.

Allowing any criticism is like the Wizard of Oz letting a little dog pull back the curtain.
Lucas is a childish narcissist with visions of grandeur with a few clueless sycophants hanging on his every word, but surrounded by the reality of terrible decisions, pandering to mobs, talking out of both sides of his mouth, and all those very bad outcomes those kinds of actions have caused.
It's a joke that the largest municipality in the metro has the elected "leadership" that it does.
KCMO is a sucking chest wound on the region.


Oh little racist panty waste can't take the criticism. Good thing Tony doesn't block us. Look how stupid he looks with that dumb grin, and look at his cheap suit that doesn't even fit. Ignorance is bliss, right Lucas.


What sort of results do you knaves expect from a thin-skinned leader?

GREAT results, if your goal is about the narrative.

Maybe lickass and wrecks archer with their liberal ways of doing things can go to India and save them from the plague! Hahahahaha!

Waaaaaaa! Waaaaaaa! Diaper-wearing MAGATS having a tantrum ‘cause the Mayor don’t want to read their shitty lies and racism. Waaaaaaaaaaaaaaaa!

Oh, Quinton. Did Mama Bennett forget to change your diaper this morning? You seem awfully cranky! There, there.

^^Oh, Bri. Did you forget to clean the floors of the glory hole again?

Don’t be nasty, Quinton. We all know about your anger issues now, sweetie. Gonna get you in trouble, hon.

^^and yet it's you who's getting nasty. Nasty skank. Weird.

We can always tell that "weirdly" the guy who can't post without using using that word in a sentence must not have a job and lacks intelligence. May as well use your real name..Annoyingly weird.

Not of you weirdly. Jerry springer is almost on. You're trash

The hyper-partisan Mayor Q has blocked KCPD Chief Smith from going on local radio if the station (710 am) seems to lean conservative. This is in addition to not allowing him to be honored at the local GOP fundraiser the other week. It makes sense that he does not want to listen to any detractors now. That is just his way.

Mayor McDrinkerson is a bully and a coward. Chief Smith needs to stop cowering before him and his angry woke mob of paid social media trolls. Pull the curtain aside, Chief.

^^You're a ho and a skank. See how easy it is to call names dummy?

^^^ I see Mr. McDaniel is back. How many Lucas trolls are trolling this site, anyway? Shows you how scared Lucas is right now. Probably peeing his little yoga pants.

^^I know you charge extra for that Bri.

Wow, Ken, you truly are as ghetto as they come, aren't you? It figures that a disgusting, vulgar piece of work like you would be a follower of Mayor McDrinkerson. Birds of a feather, as they say.

I'll miss buying their game day panties the next day on eBay.

I'll miss buying their game day panties the next day on eBay.

You sound like someone who has bought sex all their life because women find your ass repulsive.

Dramaville KC, this is the same guy that stalked me on Mayor McDumbo's page and threatened to out me to the public so that everyone would know who I am. The same guy who threatened to expose my Google account here. He's a real nasty piece of work and naturally a good, black friend of Quinton Lucas'. I believe his name is Ken McDaniel. I'd recognize his extreme nastiness anywhere.