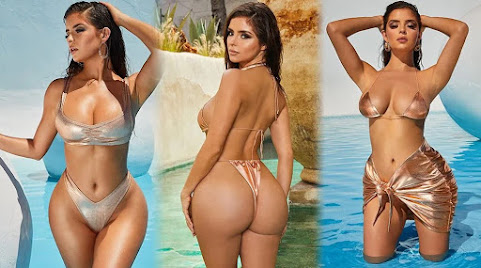 For right now we share a peek at hottie Demi and her influncer assets as her Insta game remains STRONG and inspires this glimpse at pop culture, community news and top headlines.

Downtown is your home for First Friday arts, foods, and shopping. While the Crossroads and 18th & Vine neighborhoods are known for their First Fridays arts showings and traditions, the City Market, Urban Mining and West Bottoms extend the celebration into the weekend farmers market, plus vintage and antiques shopping!

In a thin crowd, socially distanced to observe COVID-19 precautions, those who knew and worked with Alvin Sykes spoke passionately of his legacy as a lifelong warrior for justice and civil rights. Sykes passed away on March 19. He was 64.

by: AP Wire Posted: / Updated: Stories are back on the cover of Kansas City's Northeast News this week after the newspaper intentionally printed a blank front page of its previous edition to show community members what they'd miss if the newspaper folded.

Demi Rose Is a Blossoming Beauty in New Corset-Hugging Photo

Demi Rose Mawby is celebrating spring in her latest Instagram post. The fan-favorite model seemed to be blooming herself in her new photo on Monday, which was another sponsored post for Pretty Little Thing. It showed Mawby in a see-through white corset with a bouquet of budding flowers bursting [...]

It's the latest in a series of reports this week showing a resurgent economy, with consumer confidence jumping to levels not seen since the start of the pandemic and manufacturing activity surging to its highest peak in nearly four decades. The S&P 500 also closed the week at a record high.

President Joe Biden's son Hunter Biden is opening up in his first TV interviews since his father took office. In separate interviews with "CBS Sunday Morning" and "CBS This Morning," he answered questions about a Department of Justice investigation, whether a computer reportedly containing confidential information was his, his battle with substance abuse, his new memoir and more.

Florida Rep. Matt Gaetz, who is the subject of a federal sex-trafficking probe, allegedly bragged about his sexual prowess by showing lawmakers images of nude women he claimed to have slept with, according to a report.

A Chinese Attack on Taiwan Is Getting Closer

Beijing sent the largest-ever incursion by Chinese jets into Taiwan's air-defense identification zone last Friday, leading the country's defense ministry to announce that it would no longer scramble its own planes in response.

OVERLAND PARK, Kans. - A man fighting for the return of his late wife's service dog encountered a setback in his case in a Maryland courtroom on Thursday. The central issue of the court battle is the question of who owns the service dog, Tootsie.

Many Royals fans - as well as baseball fans in other major-league markets across the U.S. - spent the weeks leading up to Thursday's season opener at Kauffman Stadium angry about current broadcast options.

Kinley Strickland and Calvin Vick's new venture in Overland Park hopes to keep the daiquri shop's party going when it opens mid-April in a high-visibility space on Metcalf Avenue - but the duo's second location will expand with a more family friendly flavor.

Patchy frost likely across the area this morning as temperatures drop below freezing before daybreak. After the sun comes up we will warm quickly. Winds from the south will increase between 15 and 25 mph, but could gust up near 30 mph at times.

Olivia Rodrigo - deja vu is the song of the day and this is the OPEN THREAD for right now.

Has Chauvin ever expressed any remorse, ever?

Gaetz showed people nude photos of women he'd slept with. Incredible. That never happens in real life, said no man with a good-looking male friend ever.

That will be useful information in the event Hunter Biden ever runs for office.

If the agents ever finish taking home Hunter's laptop each night to review the cheese pizza, maybe they'd arrest him. How many times do you have to review the videos boys?

We are lucky that Hunter didn't open up with that yet another liberal owns an illegal weapon. Sarah Brady fought to her death to ban everyone else from owning the shit she illegally bought her son. Biden is your typical 2 faced Anti everything they use and are. Poledansinglosi isn't using fingernail polish as her olny source protection either. Nor AOC , or Iman nor Bernie. well bernie might. The guy owns cats , he wears them on his sweater.