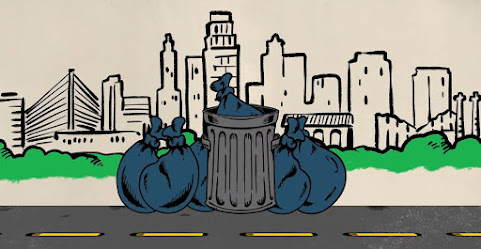 An interesting tactic has emerged in the fight to keep Kansas City's largest revenue source.

As of this writing, the E-tax renewal "Heroes" animated advert has been the most successful online commercial for the campaign judging by view count. For those who haven't seen it already. Take a look at the Saturday morning cartoon tribute from City Hall . . .

So far the TV campaign is low key and print advertising is barely 'a thing' in this town anymore . . .

However, online adverts allow campaigners to zero in their target market and possibly avoid rampant Johnson County criticism altogether. By and large the Golden Ghetto HATES the KCMO E-tax because commuters pay most of it and, many allege, see the least benefit and have no representation in how the money is spent.

Nevertheless, laser focused Internets marketing hopes that the low-turnout election will work in favor of renewal supporters by limiting public awareness to the small niche of Kansas City voters who typically approve the measure.

There is no real organized campaign against the E-tax and last time renewal of the levy won by more than 50 points.

And so this campaign seems confident in their Internets cartoon strategy.

So the slush fund wins again?

Sure, why not, the target voter has a child's mentality.

I feel sorry for the black and brown people East of Troost who can't figure out how to access the Internet. Sloppy Joe said so, it must be true

My name is Carl Lafong I will vote No for the E Tax.. a No vote will assure the city of continued growth.. A NO vote will help the less fortunate.

This is why the city wants the public education system broken, when you produce idiots and uneducated children by the thousands every year, you produce uninformed voters who will believe anything the city tells them, they lose with every yes vote and are too stupid to know it.

People choose to remain uniformed when it comes to politicians lies even with the fact that politicians are the reason they can’t get ahead and continue to suffer.

Sure, let's penalize people for living in KCMO and businesses and their employees for locating here. After all, the city has enough positives that a small live here work here penalty shouldn't matter: low crime rate, great roads, prompt snow removal, top notch public schools, competent leaders, oh and did I mention the low crime rate?

Just vote No. Early and often.

They use the same argument/threat each time this thing comes up for a vote -- no police, no fire, no trash pick-up, no streets repaired, no anything. Also use the same promises if it is approved. More of everything mentioned above, and happy people all around. Vote NO.

The consultants running the e-tax campaign are from out of town and don't pay the e-tax.