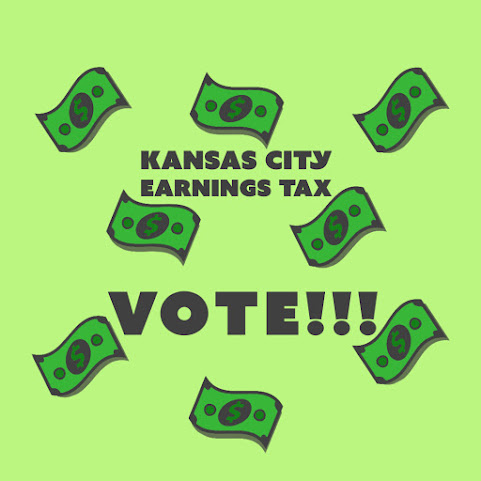 In modern usage, late capitalism often refers to a new mix of high-tech advances, the concentration of (speculative) financial capital, post-Fordism, and a growing income inequality.

In KCMO the E-Tax exemplifies "late capitalism" in a few frightening ways . . .

- As a selling point, the E-tax is leveled against people who don't get to vote. Supporters proudly proclaim: "Half the revenue generated by the e-tax is paid by people who live OUTSIDE Kansas City." And so, an effectively exploited and longstanding loophole in representative Democracy maintains this crucial revenue source.

- There is no viable backup plan. For a decade we've heard promises that local leaders will find other revenue sources but nothing has manifested over that time. Instead, taxpayer support of developer speculation and tourism schemes simply hope to distract voters.

Accordingly, economist critics of capitalism need look no further than Kansas City as an example of unsustainable "late capitalism" that risks implosion by way of divisive politics and poor planning for the future.

Decider: ‘WeWork: or The Making and Breaking of a $47 Billion Unicorn’ on Hulu, a Late-Capitalism Documentary About a Steve Jobs Wannabe

Jacobin: The British Monarchy Will Not Survive Late Capitalism — And Harry and Meghan Are Proof

Romper: Universal Basic Income Came To My County — It’s Not Enough, But It’s A Start

NYMag: "America’s loss of faith may have won Biden the presidency."

Vanity Fair: Republicans Horrified at Biden’s Plan to Fix the Country by Taxing the Rich

in the end, people vote with their feet. That's why KC and a lot of other cities liked it actually lost population.

Wow. You have no idea what 'late capitalism' means, nor any basic understanding of economics.

Can't tax yourself rich. The Soviets already tried it and failed.

Paying businesses to locate in KC so they can get their employees E-tax kicked back to them is not a viable business model. But that's what it takes to get most businesses to stay in crime ridden, bureaucratic mess.

Another horseshit buzzword from people bent on redefining everything, until it all means nothing.

Can I get one of those free rides to vote NO on the Etax? North of the river, sorry, we don't go there.

The e-tax has no relationship to the neo Marxist phrase late stage capitalism. It's instead indicative of another failure of leftist governance (treating tax paying citizens so poorly that they leave the taxing jurisdiction).


No need to go vote the tax will pass anyway. Don't be stupid stay home and don't waste your time. The racist Lucas has this.

We are being replaced, our votes, when the elections are not being stolen right in front of our eyes are diluted with foreigners who do NOT care about our history and will use our taxes to finance the 5th column of parasites who will then be used by the D﻿﻿﻿﻿﻿﻿卐﻿﻿﻿﻿﻿﻿M﻿﻿﻿﻿﻿﻿☭﻿﻿﻿﻿﻿﻿CRAT﻿﻿﻿ party to achieve the Red Chinese Uni-Party system that actually is already in place.

"Minorities". Gimme a fuckin break. Imagine if millions of Americans deluged the border of another country and illegally forced their way in, were accorded voting rights. The world would denounce us and our irredentist cultural imperialism would be condemned!!!

America is dead, there is no rule of law.

One interesting note, Hispanics don't care if you call them racist. Guess who lives in Compton now? The only thing straight out of Compton, is the sound of black people, moving out, or, getting iced in the streets.

Black people who support the dramatic, light speed, demographic change that the D﻿﻿﻿﻿﻿﻿卐﻿﻿﻿﻿﻿﻿M﻿﻿﻿﻿﻿﻿☭﻿﻿﻿﻿﻿﻿CRAT﻿﻿﻿ party is forcing down our throats, will reap what they sow. I spent a couple of years, 20 years ago in California and if you were black and went into the wrong neighborhood, the Hispanics just fuckin killed your ass. P.E.R.I.O.D.

Agreed, the fix is in. If you don't want to pay it you will have to not live or work in KCMO..

A vote no will make a shitty situation into diarrhea.

Does Patrick Mahomes pay the e-tax?

No, it's just for us wageslaves.

Let Gwen take over the schools. Continue to deliver nothing and keep tax rates high. This is the formula for disaster.
Yours truly, East St Louis.

What's your reasoning for claiming that Pat Mahomes does not pay the e-tax? Just envy, or do you have facts?

Republicans Horrified at Taxing Their Donors, the Rich

9:28 The rich folks on Wall Street, in Leawood and all over the country, are Democrats, hooked into the system that kills the middle class.

Democrats are the party of the rich.

Corporations, all now WOKE, all Democrats. The pretense that the working class has anything in common with Democrats (With the exception of unions, who betray their membership and send jobs to China for laws that make them more powerful.) is risible.

9:28 - Democrats have to lie in order to push their racist policies.

Notice your boy Biden is keeping it. He's keeping a ton of Trump's policies. And you like it. Hypocrisy requires shame.

You have no standards nor morality. Hence the ability to lie with abandon.

Woke Wall Street hates the middle class and makes big bank when Joe prints money like it is toilet paper.

The Federal Government is doing the Cloward Piven reset and destroying small business.

other cities dont make you pay 1%.

I'm not a big fan of the e-tax but I'm also not a person who wants Kansas City to go bankrupt. If you have a better alternative to the e-tax please share it if not you're just blowing smoke.

Welll, how about some basic accountability for our elected grifters, an audit of the various slush funds, maybe an attempt at priorities beyond the 18th and Vine style money pits?

10:51 How about looking at all similar sized cities in the midwest that don't have the E-tax. Just copy their budget and their tax structure.

The e-tax has nothing to do with capitalism, late or otherwise, other than sucking on the economic engine’s tit to fund a bunch of politically favored programs that produce no tangible improvement for any except the politically connected.

Pass or not, the economic decline of KC will continue because of the lack of basic civic services and safety in the urban core. This failure is the same for all longtime Democrat run shithole cities.