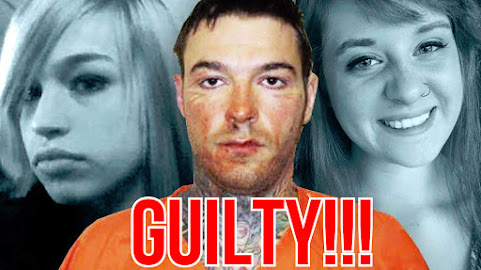 The infamous local tattooed dude and bad boy will be behind bars for a very long time after his nice guy routine confronted FAIL inside the Cass County Justice Center.

The women were killed nearly a decade apart. Jurors deliberated for about 15 hours to reach the verdict.

The sentencing phase is expected to begin Friday.

He's looking at up to 30 years maximum with a minimum of at least 10 years. Skeptical hot take: After the story fades from public memory, he could be out in about 7 years for this conviction based completely on circumstantial evidence and mostly by way of his own confession.

KCTV5: After guilty verdicts, Yust could spend rest of his life in prison

Anonymous said…
I give a big thank you to the people of St Charles Mo. Jury. He would have been found not guilty with a Jackson county jury.
4/15/21, 8:49 PM

Anonymous said…
Thank god Petersucker was never involved in this, she would have fucked it up so bad we would have had to pay him millions of dollars and he would be set free.

Anonymous said…
Cass county screwed up by recording phone calls between Yust and his attorneys. He could end up walking.
4/15/21, 9:34 PM

Granni said…
If they run the sentences consecutively instead of concurrently he might do the whole 30 years. By the way Tony...the trial was in Cass County not Jackson like your tagline says. Cass usually gives out longer sentences.
4/15/21, 9:35 PM

Anonymous said…
I’ve been warcrhing manifest on kshb tv and they’ve been scrolling that kyler was convicted and it’s been scrolling non stop all night, isn’t this the same people that said they wouldn’t do theses things because it’s hurtful or some dumb shit like that? They don’t do this for the koloreds when they have multiple murders right? Is this some more of that white hate crap they spew constantly?

Don’t get me wrong this retard should fry but it’s apparent what’s going on with the media and the hate whitey crap going on nowadays.
4/15/21, 10:12 PM

Anonymous said…
Sorry hateful beatches. I see that the office of Jean Peters Baker scored another victory. Good for her, she is going a great job!
4/15/21, 10:35 PM

I think probation is in order. We should not let the media and the mob dictate justice. He is young enough to be reformed and should not waste away in jail.
4/15/21, 10:37 PM

Anonymous said…
^^^ Not weird at all. The trial was held at the Cass County Justice Center in Harrisonville, MO.

The jury was brought in from St. Charles County.

Anonymous said…
I remember the Good Samaritan murderers. Those two wonderful specimens of humanity had both been given life sentences in Missouri -- seven years previously -- when they were released on parole. Within a month, three people with nothing but helpful intentions toward them were dead. In Missouri, Life (or 30 years) by no means is really for Life, or 30 years, or even 10 years.
4/16/21, 3:07 AM

Anonymous said…
This was in CASS County in Harrisonville dummy. No Jean Peters Baker involved.
4/16/21, 9:39 AM

Anonymous said…
I'll repeat until it sinks in, Clint Geezerwood.