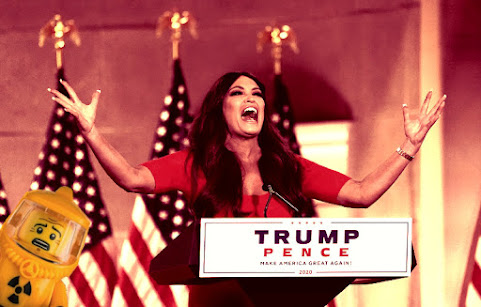 Don Jr.'s lady friend and loudest woman in the MAGA army has new job pretending to care about Missouri.

It's uncertain how much help she'll provide Greitens on the national level since there's not much interest in supporting him by anybody but your drunk uncle who keeps getting kicked off Facebook.

This "news" has sent progressives into a frenzy with reactionary social media chatter.

The MAGA connection reminds us that the establishment GOP in Missouri is EXCEPTIONALLY BORING and their "star power" to attract media attention ranks right up there with the opening of new convenience stores.

If they're smart, they're already working on commercials with Ms. Gulifoyle screaming her support at the top of her lungs.

Meanwhile, so many other candidates for the open Senate seat for Missouri seem to believe they're entitled to votes without captivating or even considering the electorate.

Like him or not, and most don't, Former Governor Greitens shows us that he's willing to work to win his old job back.

CNN: The disgraced former GOP governor has aligned himself with figures in Trump's orbit, drawing concerns among from an array of Republicans in Missouri politics and in Washington. Guilfoyle is also the partner of Trump's son, Don Jr.

Both of those dudes have my vote!

The former Governor's fundraisers will be even more fun now. I am saving up my cash! Including plenty of small bills! YES!

The Libs are not comfortable with open sexuality.

It seems like the fix is in for Greitens with the MAGA clique around Trump. Eric Schmitt actually seems like a worthwhile candidate and maybe less controversial. He should not be given short shrift so early.

The GOP belongs to Israel.


I really don't like either one of these people they were both staunch democrats. Guilfoyle is kinda goofy and she was married to Gavin Newsom. Even though the black racist and ANTIFA member Kim Gardner set Greitens up there's something about him I don't trust, her either.

he has my vote!

2 more for the investigation industry, it's growing by leaps and bound thanks to the maga morons. Did you hear the whining about "conditions" in the DC jail from those whiny ass maga bastards. Lot's of big talk leading to time in jail, so many thrown in jail.

Did you hear that the medical examiner ruled Officer Sicknick’s death was due to natural causes, two strokes in the brain stem that were not brought on by physical trauma or an allergic reaction to bear spray. Yep, another deep state lie with the intent of smearing patriots.

How many months before Guilfoyle dumps Don Jr. and take up with Eric G?

Will we be graced with more stories of sexy workout/duct tape time at EG's the basement gym?

Wonder if Kimmy has already spent some "quality Basement time" with Eric The Uprighteous?
Can we see the photos?

No @4:46, we haven't had time to hear that, the Russian-funded Conspiracy Generatirs just made it up.

Since when does "High and Rank" add up to "High Ranking"?
Now "High Skanking" we can all go along with.

They are having an affair. The MAGAs will love this. Pure hate and dishonesty. Perfect for the Republican party.

4:46 ^^^^ I bet alot of people would have stokes if they had to fight hand to hand combat with a huge mob of armed rioters, outnumbered for several hours. Dont you think the terror and spike in blood preassure due to a huge attack, the biggest on the Capital since the redcoats attacked might cause strokes? If he were sitting at his desk bored that day. he might still be alive. You have never fought hand to hand for 3 hours.......

7:58 And you have? Never! Hand to hand combat? NEVER happened.

If you watch the videos of rioters crossing the barracades, attacking the lines of policemen and attacking police laying on the ground, or pinned in a 1/2 closed door, its hand to hand combat. it went on for 3 hours. Ashley got what she deserved, a bullet, only she died too quick, It should have taken a few weeks of slow suffering. She wanted to get into the area where the lawmakers were hiding and hang Mike Pence. Here she was in the Air Force to protect our country and lawmakers, then she became a traitor and attacked them. The capital police should have shot and bayonetted the rioters if they attacked the line. After a few rioters were gutted like fish, the rest of the chickens would have run away. oh and Trump, the one that said " I will walk down there to the Capital with you" - well he was hiding out in a secure White House watching on TV laughing at your ignorant protesters doing his illegal will. Your patsies - and no Trump issued NO PARDONS for the rioters! Hee Hee! It was all a huge farce - the election WAS NOT STOLEN!

11:37...hundreds of thousands of ballot dumps, nothing funny about that.

^^^ @3:40 Also nothing real about that, just another lie from the Russian-funded Conspiracy Generators.

Hey speaking of Greitens and other Republican Losers, isn't today the day that the National Impeachment Record Holder was supposed to march triumphantly back into the White House?

(Asking for Friends, over 7 Million of them.)

Hey, did those silly impeachments come with criminal charges? No?

Then they were just empty show trials that sapped energy away from fighting the pandemic. Aren't you proud? Orange Man Real Bad!

By the way, Officer Sicknick died of natural causes. His family pleaded for the leftist propaganda outlets to hold off on a rush to judgment, but there was an agenda to push.

Dr. Chimpy now has a new area of expertise! How cerebrovascular accident relates to hand to hand combat! I love it!! Lol

Love Kimberly. Looking forward to seeing more of her.