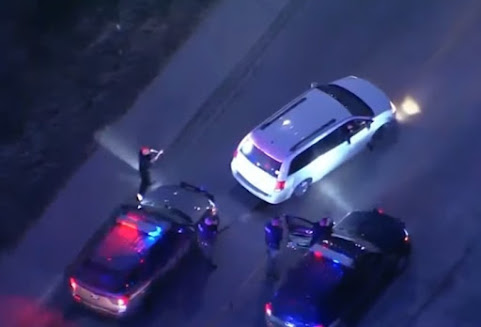 For those who already forgot, here's the write-up . . .

KMBC: Two in custody after early morning police chase on east side of KCMO

The clip is exceptional because it showcases some exceptional broadcasting skill from Johnny Rowlands as he navigates above chaotic Kansas City streets.

Chase went though parts of KCMO but that is Independence PD


You can't drive through the east side without a police chase passing you. That happens more than what is reported. I've seen it and have seen the police let them go due to the safety of other drivers. I'm starting to blame the residents of KC for letting this happen and for sitting back and not putting pressure on your stupid mayor, he has tied the hands of everyone and is praising the crime. Do nothing..... then keep your mouth shut about it. You need to get the judges that radical prosecuting attorney out too.

So what did the chasees do that prompted the chase? Do J Schools train their students to avoid asking who what where when and why?

Women drivers! What can you say?

Sunflower Medical Group called her, her PCP is not covered, but could see Dr. Comfort in 2 months as a new patient.