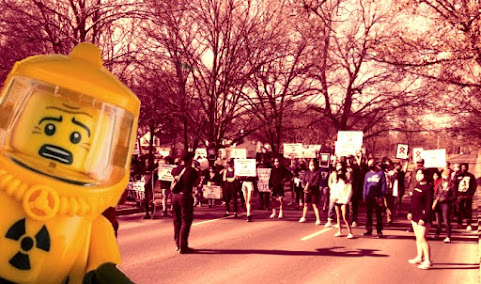 KCTV5 newsies Leslie Aguilar has the scoop and much better pix of the action in progress . . .

Community members join friends and family members of Donnie Sanders along Ward Parkway to protest the Jackson Co Prosecutor’s recent decision not to prosecute the KCPD officer who shot him . . .

Protestors are now gathering on the street outside Prosector Jean Peters Baker’s home and many neighbors have come out to listen to what they have to say.

In a statement, Peters Baker responded, saying, "I fully support the right to peacefully protest. That includes the protest that occurred at my home today. I do question those few people who decided to carry and display rifles at a peaceful protest, to block traffic, and to vandalize a car, which also occurred today." She went on to say, "For the full report detailing the evidence and applicable law that governed my decision on the Donnie Sanders case, I would direct you to my office's website. I want to again convey my condolences to the family of Donnie Sanders."

what about all of the local killings? are they mad about that too?

I love it when Democrats eat their own. 😏🍿🥨🍺

If you catch 100 red fire ants as well as 100 large black ants, and put them in a jar, at first, nothing will happen. However, if you violently shake the jar and dump them back on the ground the ants will fight until they eventually kill each other. The thing is, the red ants think the black ants are the enemy and vice versa, when in reality, the real enemy is the person who shook the jar. This is exactly what’s happening in society today. Liberal vs. Conservative. Black vs. White. Pro Mask vs. Anti-Mask. Vax vs. Anti-vax. Rich vs. poor. Man vs. woman. Cop vs. citizen. [Etc.] The real question we need to be asking ourselves is who’s shaking the jar… and why?

FUCK YOU FUCK YOUR MASK

Facts never matter to the sheeple.

Watched all the white folk sporting their white guilt/priviledge sorry white asses. Yet no one showed up for the "community event" at 39th and Prospect which was to draw attention to all the black on black homicides.
The black Look at me, I'm a victim and it's all your fault at it's best.

Hell they were offering free food and still couldn't even get anyone over to the 39th street thing.

5:02 right on dude! These effing morons are idiots for marching for all the wrong reasons as usual, but then again nobody said the blacks had a brain amirite!

Hajahah lololo you will never be woke enough to satisfy the soros backed retards who eschue logic and facts for emotions.

Nice try though on the charges for the dead tranny who resisted arrest.

Jean you are gonna be primaries by a soros funded funky who checks more victim boxes than you.

I suggest you come out as transgendered if you want any chance of keeping your job.

And these are the same dumbasses that voted her worthless ass back into office, you got what you deserved with this clueless winch.

5:14...read Saul Alinsky's rules for radicals. He explains who is shaking the jar.


Missouri needs to follow Tennessee in the new laws that protesters can't block streets. This is not legal and how they get by with this here is beyond me. Looks like it has stated early. Need to get something done the city can't afford to lose anymore businesses or people. Most everyone is shopping and going to the burbs for things. Get it together Lucas you are on the down and out. Suck it up Mahomes you came into our city and caused this too.

One stood in the middle of Valley Road blocking traffic with an assault rifle around his neck. Then they foolishly walked back to Ward Parkway chanting "Whose streets?" "Our streets" Basically they made fools out of themselves

Peters-Baker, just like Lucas and the other panderers, think that trying to make believe they are "woke" and support these SJW clowns, that they'll then be respected and left alone.
But a low-information mindless mob will eat these elected fools and roll right over them on their march to oblivion.
KCMO needs some people with both common sense and some guts and there certainly in short supply so far.
Any adult supervision?
The riots and destruction will just continue to get worse.
Sad.

Kansas City is a diverse and thriving place!

Ignoring the fact that two witnesses to the shooting believed Sanders either was pointing a gun toward the officer or was raising his hand and advancing toward the officer. You don’t get witnesses to cooperate much, but for them to truthfully report their observations and go on the record with the police and courts is another thing. Nothing will be good enough.

SHE GETS WHAT SHE DESERVES!

JUST IN TIME FOR THE SUMMER

The Libtards are making the worst decisions for all Americans. Trump had the economy cooking until Basement Biden's best friends, the ChiComs, decided to unleash a deadly virus upon the world. God gave us resources in the ground, oil and gas, to use to make our lives better, but Basement Biden doesn't want us to use them, raising the cost of everything transported, made and powered with black gold/Texas tea.

Why didn't they do this march during the sub-zero temperatures? Big puss*ies. That's why.

Trump wanted to give $2,000 to all Americans last fall, but the Demoncraps didn't want to help him during an election so they shot it down. Only 9% of the big bailout bill is going to COVID relief. What a complete joke.


have they begun looting yet?

We have a lot of empty busses rolling around the KCMO streets. I have an idea...
How about painting these money wasters with an advertisement which states, "Black Fathers Matter, black fathers stay home and raise your kids. Stop your criminal behavior, and dedicate your selves to your family. Do not father multiple children with multiple women. Get a job..."

Clever, James, Shaw, Ellington and others will destroy the Democratic Party. These protests will shift the moderate voter to the Republicans.

7:34 those laws are on the books the police need to do their job but are hampered by politics and JPB

Of the video I've seen the protestors, as usual are taunting drivers hoping that one of the drivers will do something wrong and then the protestors will really scream "I'm a victim"

When something does happen, and it will there will be no sympathy from people that have an ounce of sense!

It is against the law to place trash in the streets. Fine them!

Triple shooting in da hood, numbers 27 & 28 in the books people!

I asked a cop how long of a walk to catch the toy train and he said I don’t know, so far no ones ever made it!

How will the Kansas City Country Club's token Jew and black get in there if the road is blocked. Call Tom Watson.

Jean lives on Ward parkway? Why not East of Prospect Bitch?

No shit. If they actually cared, this is where they would be.

'Being a liberal means spending your entire miserable life searching for new reasons to be “offended.” It’s a pathetic existence. Living an absolutely joyless life is the hallmark of liberalism. Worse is their desperate need to make everyone else miserable too. Friends don’t let friends do liberalism.' - Dan Bongino