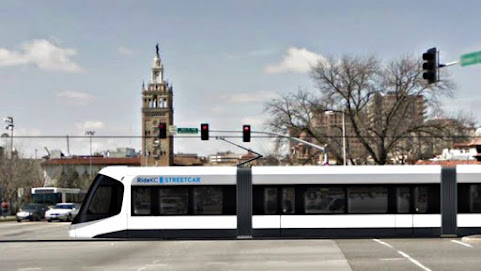 The Kansas City Country Club Plaza has been targeted for the biggest population influx it has ever seen in the modern era as a sketchy real estate plan banks on the Prez Biden bailout to drive economic growth.

Here's a peek at the basics of the plan from a real estate hype blogger:

"Museum Tower, a $116 million apartment project proposed as a gateway to a potential cultural district at 45th and Main streets, leads the list of development proposals filed with the city in advance of stricter tax incentive policies taking effect early next month.

"The bump in applications to the Economic Development Corporation of Kansas City includes the first official confirmation of Museum Tower, the long-rumored apartment project being pursued by Main & Main LLC, an entity controlled by the Merriman family.

"The development team includes Americo Life and Burns & McDonnell, the same pairing that designed and is building what was to be the Waddell & Reed office tower going up at 14th Street and Baltimore Avenue."

That last line holds an important hint that things might not work out as planned given that FAIL of the Waddell & Reed project.

THIS MASSIVE PROJECT THREATENS TO NOT ONLY BLIGHT THE HOTEL NEXTDOOR BUT ALSO BRING EPIC REAL ESTATE SPECULATION TO THE PLAZA!!!

Forgive us for being skeptical but there just might be a POSSIBILITY that the post-COVID economy won't afford the kind of prices developers are asking. They might have to drop those prices and then the Plaza will be hit with a HUGE influx of low-rent neighbors with not a lot of cash to enjoy the last remaining luxury entertainment district options.

Of course maybe we just worry too much and everything will work out fine like it always does . . . The last year has shown us that, right???

A glimpse at scale from another source . . .

"The 293,400-square-foot Museum Tower is to include 300 multifamily units, a 460-space underground garage and mixed uses at ground level.

"The new building will create a “community-focused experience bringing cultural arts, modern apartments and food and beverage together in a unique urban landscape,” while serving as a “design-focused node connecting the streetcar to the arts district,” submitted materials show."

Looks like a wonderful housing project. Going to be a huge success.

See you at the groundbreaking!

Nordstrom's should run. Quickly. Unless they can make a profit with 40% shrinkage and the occasional protest fire.

i was wondering where the culture was in KC since it is not the gossipy male or ladies luncheon in Rozzelle Court.

Sounds like a winner to me. There's a market for such a development.

You guys aren't it, by the way.

correct, not interested in a stay vacation on the plaza. HA.


The Plaza is already destroyed it will never be what it use to be.


I wait for the day when you get tired of getting and being so emotional and sensationalizing of any change that comes across.

Burns and Mac trying to create work for itself again. It did not turn out so well with the new airport but try, try again.

Great news for city council friends, lawyers and developers. Get a TIF to build a "Luxury" building. That blights everything else in the neighborhood. Get another TIF to tear down the blighted properties and build another "Luxury" project.
Ya gotta look at the Big Picture.

Who would want to live there?

The traditional line of demarcation - Troost - has already moved west. Projects like this will merely speed up the deterioration

I'm not sold on the streetcar, but "change" does not equal "destroy."

I remember the Plaza from the 1970s, and I thought it was charming with all the stores that appealed to the middle and working classes. I don't find it so charming now, but when I go through the Plaza there are lots of people there who evidently like it now that it's more upscale and generic. The new apartments would not be something I'd be interested in (and yes, I could afford one), but if there are enough people out there who want that, more power to them.

I do think it's unfortunate that taxpayer subsidies are needed to satisfy the tastes of the wealthy, but whatever.

Who would want to live there?

People with lives. So, don't worry about it. Just refill your kerosene heater, the trailer is gonna be cold tonight.

Remember to vote NO on earnings tax. With reduced income, the City might finally stop giving our money away to developers.

Ok, I'll remember to vote yes. Thanks for the reminder to not like a moron.

YOU DONT NEED A SIGN EVERYBODY KNOWS YOU ARE A MORON

Not the quantity that's the problem, it's the quality.

^^ CORRECT,it's a joke that makes you choke!

anyone willing to pay that rate per sq ft for a non-mortgage in KC is extremely dumb.

that rate per sq ft is even dumb for a mortgage in KC.

Anybody that pays to live anything in KC is dumb!

the metro not worth more than $450/month.

c'mon over anyone, see if you can impress me in my 430/month.

Had the Huli Huli chicken today,support this place because that shit is banging

Had the Huli Huli chicken today,support this place because that shit is banging

if you are over 4'-10" and have to sit on my toilet, you'll either have to sit sideways or open the window and stick your left arm out it. HAHAHA don't really care.

Their food is crap, if you scooped out what the Hawaiian Bros. dumped in the toilet and slopped it on a plate it would taste better.

Those rent numbers look absolutely delusional to me. What are they smoking?

this would be a huge HELP to the plaza by bringing in a core of young, monied people.

Does anyone really think fools paying that kind of overpriced rents are going to ride a streetcar?