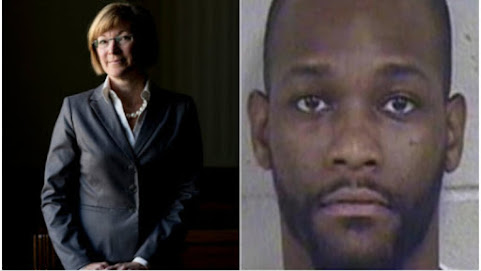 Read closely, this is a nuanced take from our blog community which contends that a tougher prosecution for previous offenses could have saved this guy's life and prevented local suffering. Check-it . . .

Only a few of the local media outlets detailed the violent history of Malcolm Johnson, the man shot and killed this week during an arrest by KCPD.

From these media reports, it would appear the Jackson County Prosecutor’s Office could have prevented this incident as well as the other recent shooting which Johnson was suspected in from happening had it not been for their past lenient and slap on the wrist plea deal, which as many know, are nothing new for violent criminals in Jackson County.

Johnson was previously charged with 2nd Degree Murder and Armed Criminal Action regarding a 2014 homicide in Raytown.  Following a mishap with the jail leading to his accidental release in 2016, he was later captured again and was in possession of a stolen handgun.

In 2017, he accepted a generous plea deal from the prosecutor’s office to a lesser charge of involuntary manslaughter, which would only seek a six year prison sentence.

Fast forward to March of this year, while still on parole, Johnson is suspected in another shooting and was yet again armed with a handgun when officers attempted to take him into custody. According to MSHP, Johnson shot one of the arresting officers before the officer returned fire and ultimately killed Johnson.

Frankly there are some serious questions that need to be addressed by the prosecutor about why her office gave a plea deal to a lesser charge with what turned out to be a one year sentence in prison for a murder?

And why time and time again, we are seeing Kansas City victims and suspects of assaults, robberies, and homicides who should be in custody but are not because of slap on the wrist plea deals from the prosecutors office?

Had Johnson been given an appropriate sentence for the previous murder instead of a ridiculous deal, he would likely still be alive today and in custody. If he was, the recent shooting victim and KCPD officer would not have been shot this month.

Who was the scumbag lawyer who arranged the plead bargain?

Expand the prison system using the caves. Once word gets out you will serve your full sentence the crime rate might drop.

His death is the direct fault of JPB.

Thank you for pointing this out.

Jackson County doesn't have a prosecutor.
Peters-Baker is a frustrated social worker wannabee and a political hack.
She's certainly a part of the problem of KCMO homicides.

^^^ let me amend your statement, SHE IS THE PROBLEM.

She’s been letting murderers off for ten years now, hell, even the commie red star wrote a scathing article in 2014 about her failed catch and release program she’s been faithly getting people killed with for a decade now.

The truly sad thing is, that on point article of Petersucker has mysteriously disappeared from the commie red star archives.... imagine that.

Jean Baker is a disgusting poor excuse for a prosecutor. She should resign or be fired. No wonder murder rate is so high, and the piles of cases on her desk is getting higher. Resign now so people will have a chance.

I will also add that real women's breasts are never stuck in the middle of the chest like this. Just one more easy way to spot a tranny.

I believe the people of KCMO and Chief Smith are owed an apology.

This is why KCMO is horrible.

Jean Petersucker Baker is the hood rat criminal‘a best friend. She is a worthless piece of shit, as are the liberal fag Jackson County judges.

Agreed, the judges are the ones approving these terrible plea deals.

Wonder if the star will address this as part of their over hyped project blaming black gun violence on everyone except the perpetrators.

And this guy was good enough and honorable enough to be a kid's Godfather?? WTF!? What was it that did it for the parents of Baby Taliferro? Give me a break! Everybody wants sympathy until the truth comes out...the family & their friends are about that life. Incredible!

The crime wave we are experiencing is the direct result of Peters Baker. The Star has left their hands off of her because of her political activity and her anti-police stance. The Star is failing our city as it has decided to help wage a war against the KCPD. If anyone would actually look into her office’s failures they would see so much more. Look into the suspects of major crimes and see what her office has done in the past. This city is dying because of her, and she has turned a blind eye.

No prisons, no peace

Who does her profile pics, Olin Mills?

Someday a crime will happen to Jean Baker. Then she will see what its like to be a victim. If the bad guy was released early by her she might rethink her ideas.

In Wyandotte county recently a Judge there lost both parents to a car driver avoiding police who ran into her parents and killed them both, he had a record to.

Peters-Baker looks like a tranny. Look at those giant shoulders and big, square jaw. When you look closely you can really tell.

Is this a guy that could have been Obamas son ? Like that violent Criminal Ferguson Mikey ? or George the career criminal Fentynal overdose choker ? We do seem to allow the media to change events. Just not about non special interest people.

"Who was the scumbag lawyer who arranged the plead bargain?"

Probably an underpaid overworked public defender just doing his job. Don't blame him, blame the prosecutor who gave the deal.

This is disgusting but not surprising for Jackson County. Oh, gee, we had a prisoner escape, we don't know where he is, he's a violent felon. Oh, well...That's just how we do business. I wonder if JPB will hide under her desk to avoid the tough questions just like her buddy over at city hall does.