TKC MUST READ!!! KANSAS CITY COUNCILMAN BRANDON ELLINGTON AT WAR WITH EAST SIDE LEADERSHIP OVER TAX FUNDS!!! THE CALL STRIKES BACK WITH SCATHING EDITORIAL!!! 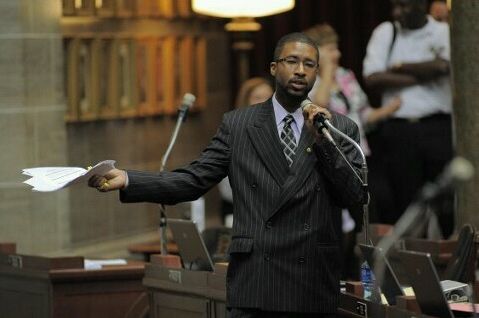 There's an urban core debate over finances underway that has been tragically overlooked by mainstream news and hidden behind paywalls.

Fact is, MSM is happy to post and re-post patronizing affirmative-action coverage or even support BLM but offering a real perspective on the politics of the urban core merits serious consideration that most outlets STILL aren't willing to offer at this late date. There are exceptions to this rule given that Dave Helling has actually penned thoughtful coverage of the Central City Economic Development (CCED) Sales Tax District and debate regarding proprieties for 1/8th sales tax.

COUNCILMAN BRANDON ELLINGTON AND EAST SIDE LEADERS ARE NOW IN ENGAGED IN A WAR OF WORDS REGARDING RHETORIC OVER CCED ACCOUNTABILITY!!!

Follow Councilman Ellington via social media for his perspective on this tax issue and a great many other community issues . . .

However, today our most KICK-ASS READERS contend that a recent editorial from a community newspaper has sent shock waves through the urban core . . .

The Call: Words Are Powerful Be Careful How You Used Them

Here's the overview of the recent controversy . . .

"Mayor Quinton Lucas introduced an ordinance directing the City Manager to work with the Central City Economic Development Board (CCED) to hire an administrator that would manage the CCED program. The Board previously adopted a resolution declaring that they needed a dedicated administrator that would work solely on CCED effort to ensure timely review of applicants and the execution of contracts."

"Third district at-large City Councilperson Brandon Ellington debated vehemently against that plan and voted against the ordinance, which passed 12 to 1. His comments appear to be based purely on unsubstantiated allegations and false claims . . ."

Pick up the latest issue of The Call for a comprehensive rundown of the tax debate, sadly, they don't post most of their content online.

Still here's the EPIC money line and conclusion of the powerful screed . . .

"Terms like "slush fund" "nothing has been developed" and "can't talk about where the money is at" and associating it with Black people, since the tax is targeted for projects in the Black community, makes the entire tax and its intentions suspect with no proof whatsoever. Furthermore, the CCED board has no control over any checkbooks or any aspect of the program outside of making recommendations to the city council which is the ultimate authority."

"The ironic part is that several weeks ago Councilman Ellington was boasting about the Troost Midtown project on public radio. That same afternoon the project was shut down by OSHA/Brownfields and the developer hasn't paid employees in weeks. There has been no mention of that project by any member of the Council."

To be fair to Councilman Ellington, we believe that fighting for sales tax accountability should always be encouraged.

However, our readers are correct . . . No matter how readers might feel about this issue, the editorial is important in that the newspaper not only opposes a rising star 3rd district leader but also demands more attention for how taxpayer cash is spent in the urban core.

Again, this issue is critical because we're talking about cash funded by taxpayers throughout KCMO. Let's not forget that even before BLM protest and election cycle rhetoric, this tax earned OVERWHELMING CITYWIDE SUPPORT . . . Voters in Kansas City want to see the effort succeed and it won't if most local media keep politely ignoring relevant debate that demands public examination beyond slogans.

sorry T, I know you like The Call but gotta go with Ellington on this one. The job of council members is to protect taxpayers and that's what he's doing.

maybe, but it doesn't protect taxpayers to take a flamethrower to a project that they approved.

All of you guys worry too much.

Cash from President Biden is going to make all of this alright and we won't have to worry about this "debate" because we'll just keep getting check after check.

^^^
And it'll be worth about as much as confetti. Weird.

Ask Ellington about the illegal speed bump he had placed directly in front of his house on E 40th Street.

^Na. I don’t care and I have a life. You apparently don’t.

Brandy cakes doesn’t want anyone over seeing the pay for no work contracts his momma’s been getting so....

You hit the nail on the head.

Too bad the $2 trillion "stimulus" did not go into public works projects like a new Water Plant and system for KC to have clean water.

Using a trillion of the two trillion stimulus to widen I-70 and I-80 to three lanes from coast to coast along with a high speed rail system running parallel to the interstates would have created 100,000's of new high paying jobs; plus provided the United States a state of the art transportation grid to last the next 50 years.

But instead, the $1.9 trillion will be frittered away on stupid social justice stuff, drugs, alcohol, and grifters getting rich.

You care or you would not have responded. Loser

they eat their own

Unfortunately, this is what takes place with about every "project" or "fund" on the east side.
Instead of what might actually be accomplished, the vicious fighting is always over WHO is going to tell everyone else what to do, WHO is going to get the credit, and, most importantly, WHO is going to control, distribute, and get the money.
18th and Vine is Exhibit A.
And the list of failures caused by the same phenomena is very very long.
And, of course, it's all everyone else's fault.
Sad.

@6:47 - bad idea, lazy "self-declared" unemployed Americans would actually have to work for the $1.9 trillion. We can't have that.

Welfare Queens would riot and loot because hard-working Asians, Hispanics and Whites were working too hard and receiving the Stimulus money if you tied it to infrastructure projects.

FDR created WPA not only to provide working men a wage to feed their families but to provide them a sense of pride of having a job and contributing to the infrastructure of America.

The United States is bankrupting itself with nothing to show for these record deficits.

Vote NO for the e tax.

Gots to spread the escalade cash.

Brandon Ellington is the "Eastside" leadership. He is Councilman at Large for the 3rd District. What other leaders are there?

Bingo! Long list of failure doesn't even begin to describe it. I was hoping all those trouble makers would die off. Among the dead: Carol Coe, Rosa James and Rosie Lowdown Lowe. That list isn't long enough.

A tug of war over who gets the first Escalade. The Cadillac dealer, weave store, rim store will end up with the money.

Ellington is not a rising 3rd district leader. He is a worthless piece of shit.

9:44 most truthful statement I've seen on this blog in a while.

FDR Put Minorities in Camps and Stole Their Property said...

so is it brownfields saying to shut down the project or is it osha finding something and then telling brownfields to shut it down?

so that the project can keep going who says yes or no when it's money/draw time?

The Call must be staffed with J School graduates. It's a typical ruse to claim that an opinion they don't like is based on "no evidence." But that's usually a lie. In this case, Ellington charged that there has been no development, which The Call then said was based on no evidence. OK, The Call, if you have evidence of development show it to us.