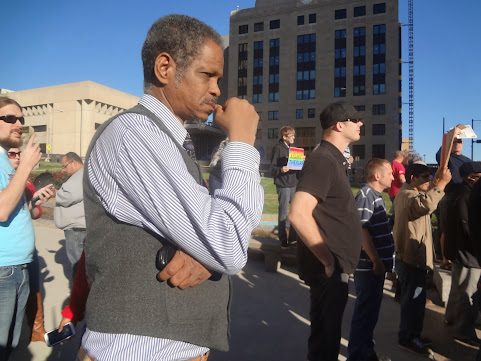 The recent passing of activist Alvin Sykes reminds us that the legends of the American Civil Rights era are slowly fading into history.

Real talk, TKC is a mere blog with tabloid aspirations and we waited on this reflection in order to share more fitting tributes and to see what local newscycle had to say.

As always, we were disappointed.

Few local news outlets understood the Mr. Sykes was an uncompromising man and one of the very few intellectuals of Kansas City's civil rights leadership.

He didn't seek publicity and always kept reporters at an arms length. His preparations for interviews were meticulous. He always overloaded most newsies with tons of resources so that they would have a comprehensive understanding of the subject under discussion.

And lets be honest: Mr. Sykes never garnered the financial rewards that so many modern day activists attain. As the BLM movement garners HUNDREDS OF MILLIONS in donations, we remember that Alvin Sykes sold t-shirts to sustain his efforts. Over the years TKC bought three of them.

And yet his accomplishments are part of American law whilst so many others are lucky to garner an afternoon news story.

A quick story . . . We share the top photo that TKC took when we first started taking photography seriously, it's not a great shot but we used a slightly upward angle in order to capture Mr. Sykes calmly surveying a protest against Nazis whilst everybody else was screaming their heads off . . . Full disclosure, TKC was mostly there to yell some truly awful things at the opposition and not in any real journalistic capacity . . . Yet a quote from Alvin Sykes still resonates and reminds us of his thoughtful consideration of modern day activists who should strive to live up the legacy provided by former local leaders but probably won't . . .

"It's a positive sign whenever people are motivated to stand up against hatred," Mr. Sykes said. "Moreover, when we can take an event like this turn it to our advantage and show the vast majority of the people aligning themselves with forces against hate. That's a good thing."