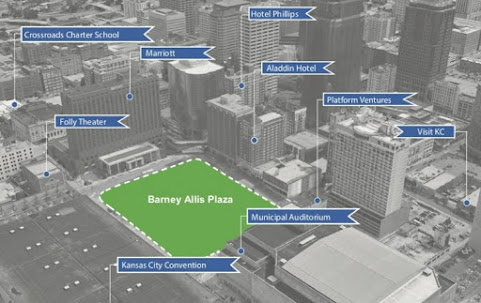 For more than 20 years Kansas City has hoped to turn the swath of land at Barney Allis Plaza into a downtown tourist attraction, this week there still isn't much progress other than more money dedicated to the idea that's still in the planning stages.

"The council voted 11-2 in favor of the plan that will take $1.3 million supplied by the Kansas City Area Transit Authority and with that money, pay McCownGordon Construction to come up with a project design . . .

"The main replacement project, estimated by different councilmembers to be somewhere between $75 million and a high estimate of $110 million, are still discussions and somewhat in the distance for the Barney Allis Plaza project."

Yesterday during council there were just a bit of fireworks but this inside word offers a clearer picture of what's happening behind the scenes . . .

"We have been paying some jerk for almost 3 years for work the city should have been doing. Doing public meetings, putting an RFP together and I have no idea what else. Anyway $3M worth!!! So now we are to the “preliminary design phase” . . . Now they have picked another company to do the design but they still need to be paid another $1.3 MILLION.

Kathryn Shields couldn’t find the $$$ anywhere in the budget so she borrowed it from the frickin ATA - you know the outfit that does such wonderful bus service citywide - NOT!!!!

Anyway they cough up the $1.3 MILLION for the design of the garage - thanks to sweet connection with the ATA!!!

This was sold as an infrastructure and safety action when it's really just another money grab from developers who are still pushing a downtown tourism agenda after the pandemic.

For now, here's glimpse at the plan that will cost MILLIONS more of taxpayer cash that could be spent on COVID relief . . . Or maybe fixing streets, picking up trash and paying more first responders.