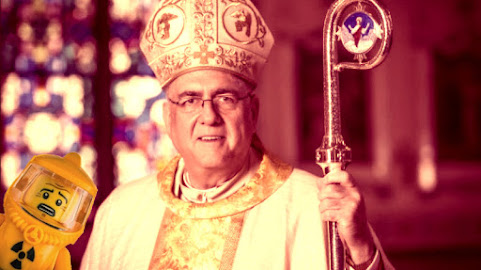 First and foremost, it's Sunday and this compassionate passage from the faith leader deserves a moment of consideration:

"As Catholics, we oppose all forms of unjust discrimination against any and all groups. It is a sin to participate in ridicule or demean individuals who struggle with sexual confusion."

Accordingly, the cleric offers his case against legislation that's well on its way to becoming the law of the land.

“The Equality Act represents the imposition by Congress of novel and divisive viewpoints regarding gender on individuals and organizations. This includes dismissing sexual difference and falsely presenting gender as only a social construct. As Pope Francis has reflected, however, biological sex and the socio-cultural role of sex (gender) can be distinguished but not separated. . . . It is one thing to be understanding of human weakness and the complexities of life, and another to accept ideologies that attempt to sunder what are inseparable aspects of reality. Tragically, this Act can also be construed to include an abortion mandate, a violation of the precious rights to life and conscience.”

A Zir Zee Zim to all the psychos.

Who trusts anything the Catholic church says?

"Who trusts anything the Catholic church says?"

I sense your frustration with TODAY'S Church. My Church as fallen in many ways. But I can vouch for those within it who stay true to the traditions and the Magisterium. Overall, Archbishop Naumann is a good man and I fear his willingness to push back is going to bring him much grief and persecution. It can be a LONELY place. He gets many death threats but refuses to cower. He needs support from all good Americans, not just Catholics. These attacks go well beyond religion.

Yes it stays true to MANMADE traditions and Magisteriums. Will it ever admit Mary was a Jewish woman who lived 600 years before the catholic church was started, she is dead and buried, awaiting the reserection - or does the Catholic church NOT believe in a reserection? Mary never heard the words Pope or Catholic once in her entire life - neither did Jesus! Your church is a fraud

"Your church is a fraud "
LOL Hilarious knuckle-dragger comment. Go launder your white sheets and hood. Brown stains are showing.
As far as your knowledge of history, you should have stuck with it past the third grade.
600 years? BTW...the Earth is round and we really did go to the moon.
Oh, and the Church does believe in a RESURRECTION... Not sure what a "reserection" is, but maybe you're still dreaming of your mom... you remember her? Your dad's sister?
What an inbred! Folks, some of these posters say shit you can't make up! Comedy gold!