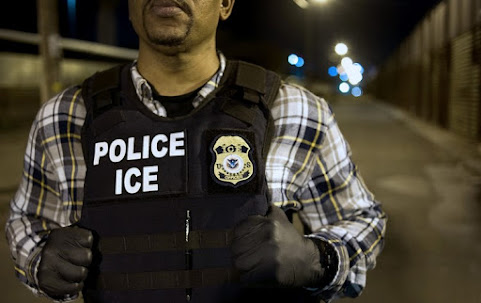 Update and outcry from The Dotte . . .

"In a statement, ICE said the 42-year-old man is a Mexican citizen who is in the United States illegally after being deported in 2009. It's unclear how and when he came back into the United States. The Wyandotte County District Attorney's office couldn't say much Tuesday, only that the investigation into the incident is ongoing. KCKPD said detectives are waiting to receive the toxicology report, which is dependent on how quick the crime lab can process samples taken on Sunday morning."

Fortune: Immigration reform is about to become a hot button political issue once again as COVID gets under control

Pro Publica: Biden Opened Temporary Legal Status to Thousands of Immigrants. Here’s How They Could End Up Trapped.

See, I told you joe bidumbs open door policy for all South Americans with or without criminal records would get people killed..... and this is just the beginning

Get used to it. They are here and dangerous.

Well, at least he had insurance I'm sure. We have to show proof of insurance to obtain our tags.

Oh, what you say? Only law abiding citizens have to provide insurance.

I did not know that.

lesson to be learned here

don't get out of your car to help anyone else

if you would have just fucked off and kept to yourself you would still be alive, car accidents are not a place to get a closer look and help

Illegal aliens entering the country illegally are not immigrants, they are criminals.

Illegals kill tons of people every year in the US of A. Mostly via drunk driving. We Don't care as long as we get VOTES !! So, drop it and vote.

I always tell people do not help on the side of the road or anywhere else......u will only up your odds of being killed. Told ha!

What the fuck does it mean "now in ICE custody"? Sleepy Joe's bitches got them out and back to their free hotel rooms before TKC had this story even up.

AOC is sending a limo for him now.


Lets hope the victim was a DEMOCRAT

ehh..the victim sounds like a nice White lady in the Northland ..likely a Republican..

if so..Joe Bidet to award the illegal murderer the Presidential Medal

Welcome to Biden's Wokestan! Biden encouraged the immigrants throughout his campaign and now claims he didn’t, and now is taking that promise back as he did the ones about student loans and his other broken promises.

To be fair, he probably can't remember who he is though.

^^and yet he's the President in a landslide wipeout victory. Weird.

I guess Democrats don't actually care about, "if we could save even one life..."

80% of illegal alien women and children crossing through Mexico are raped.

Over Half Of Anti-Asian Hate Crimes Have Occurred In The Tolerant State Of California… Ah yes! The Land of Fruits and Nuts leading the nation in bad policy!

^^Stop spamming. Start your own blog in Frogville, or do they already hate you there as much as we do here?

This isn't Fox and the Republicans saying this. Too bad Demonrats! He's YOUR guy. You own this cluster lock, stock and barrel. Things seem to be going well. I'll just kick back and enjoy the show. Pass the salt please. 😏🍿🥨

All of these criminal illegal invaders need to be sent back to the hell holes they crawled from. I am sick and tired of these a-holes coming here and raping our women and killing our people. They offer nothing of value to our country other than to boost our crime rate and suck up as much welfare as humanly possible. Mexico is so far from God but so close to the United States. Deploy the Marine Corps on the entire southern border with shoot-to-kill orders for any wetback that comes across.