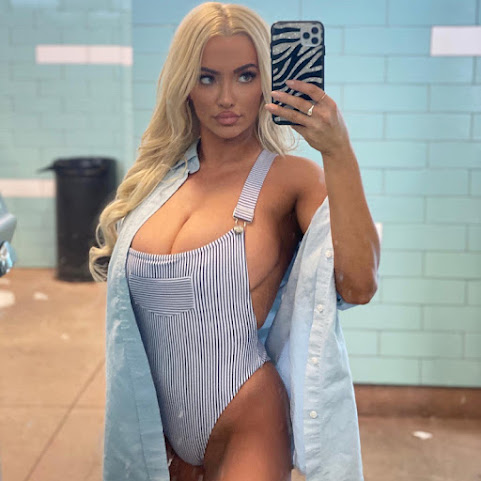 An inspirational message shared from the world's greatest Instagram purveyor of cleavage pix . . .

"The audacity of me to post a selfie in front of the world in a dirty bathroom next to a trash can. Never forget where you came from . . .

And that inspires us to live our best life and share some of our favorite headlines from pop culture, community news along with a few top headlines . . .

KANSAS CITY, Mo. - If you head to Kauffman Stadium this spring, you might notice something different when you look into the outfield. This offseason the Royals made a major upgrade to their Crown Vision video board, converting it to high dynamic range imaging. That makes it the tallest HDR video board in baseball.

Stars come with a lot of baggage-like an entourage or infernal paparazzi. But sometimes they just come with an appetite. We asked several local chefs, servers, and bartenders to reveal the behind-the-scenes dirt of when an autograph-worthy patron walked in the door-sometimes unannounced. Farina Michael Smith, executive chef/partner of Farina and Extra Virgin, and his...

The Shawnee Mission School District has been hit with a $1.6 million energy bill for the month of February. That single month's total is nearly three times what the district budgeted for natural gas costs for the entire 2020-21 school year.

'This is a wake up call': Georgia's Asian communities turn tragedy into political power

Their success - or failure - could have lasting implications for both the survival of pending hate crimes legislation in Congress and the strength of Democrats' hold on the Peach State. So they're calling on their own to mobilize. Asian Americans, political leaders say, once largely sat at the fringes of U.S.


In Defense Of Satire

Right-wing lawyer Sidney Powell is claiming in a new court filing that reasonable people wouldn't have believed as fact her assertions of fraud after the 2020 presidential election.

Vice President Kamala Harris is under fire from opponents on the right after laughing while taking questions from reporters about what Republicans are terming a "crisis" at the southern border. Harris spoke with journalists outside Air Force One in Florida on Monday to answer questions about the border, where President Joe Biden is grappling with a surge in new arrivals, particularly of unaccompanied minors.

LONDON - Prince Harry has joined Silicon Valley start-up BetterUp as its chief impact officer, after stepping back from Britain's royal family and moving to California with his wife Meghan. Founded in San Francisco in 2013, BetterUp is a coaching and mental health platform.

KANSAS CITY, Mo. - More than 8,000 Kansas Citians received a single-dose COVID-19 vaccine over the weekend. Missouri Gov. Mike Parson announced Monday that 7,250 people were inoculated with the Johnson & Johnson vaccine at Arrowhead Stadium, while 890 were vaccinated at a Morning Star Baptist Church event.

KANSAS CITY, Mo - A pink tree and stone lions. These two beautiful pieces of art stand near each other in Swope Park, but why are they there? Author Anne Kniggendorf explains the origins of these two unique attractions along with 80-plus other strange sights in the Kansas City metro area in her book "Secret Kansas City."

Scattered storms will roll across northern Missouri this afternoon and early evening before giving way to light rain showers by sunset. The wind will turn to the west overnight remaining rather robust through daybreak with speeds between 12 and 15 MPH. Temperatures will cool into the middle 40s by daybreak leading to a cloudy and cool Wednesday.

Sia and David Guetta - Floating Through Space is the song of the day and this is the OPEN THREAD for right now.

Prince Harry-Ass will do anything to get out of the house and away from his crazy wife Meghag Markel.

Wasn't chucklowe dumb enough to believe Sindney Powell's lies? Doesn't he still? Don't most of the pants-shitters on here? LOL! You can always play the geezers for fools! Even the liars themselves are laughing at them! TKC CHUDS...don't ever change. Dipshits! Hahahahahaha!

Is Sister-Wife, Dr. Jill Biden, still trying to teach Joe Biden how to walk up steps without falling and to throw his Depends in the diaper genie instead of on the floor ?

Yes! Dr. Chimpy's back with the news! Quick, monkey, we've been waiting for those hot takes! Lolol

Holy shit, Joe Biden is placing Hispanic children by the thousands in cages on the border. What the fuck is wrong with this guy?

^^ Yesterday, Kamala "Heels Up" Harris was belly laughing that Joe Biden is placing children in cages on the Mexico Border. What the fuck is wrong with this woman.

and today Sidney Powell was laughing at the TKC Geriatric fucktards who are dumb enough to thhink the election was stolen!! LOL! This includes Trumpy too! Morons!! hahahahahaha

Morons like Dr. Chimpy talking out of his monkey ass? Lol keep laughing Chimpster! We sure are! :)

And yet Trump is STILL claiming the election was stolen. Weird. Barnum was right--there's a sucker born every minute.

Sidney Powell made total fools of my fellow Americans. However this case does show how "good Christians" (and others) will also fall for and worship the AntiChrist when he appears on earth. Yes some of the kindest and most religious people are going to be fooled and think the antichrist is God. They will then follow him into eternal damnation.

Examine leaders carefully BEFORE you pledge your loyalty!

Kamala Harris is laughing because they have put border control on a gag order and they have give some kids over to people who are not their parents. The sex trafficking has started up again something the black Whore Kamala Who BTW is not the VP. They have a pretty elaborate thing going on and lots and lots of money involved. So when you kiss your kids tonight you dirty democrats maybe the will be victims like you are doing at the border now. Don't believe it do your research on the people who are there and can prove it.

EVOO would have been a better name.

5:01: And yet it wasn't. 20% of Democrats could believe the earth is flat, and that wouldn't make the earth flat.

Anyone here notice that Sidney Powell has a man's voice. Seriously. She does. There is something about her that gives me the willys. And she wears the same exact outfit everytime she is on TV. Yes, same clothes. Odd.