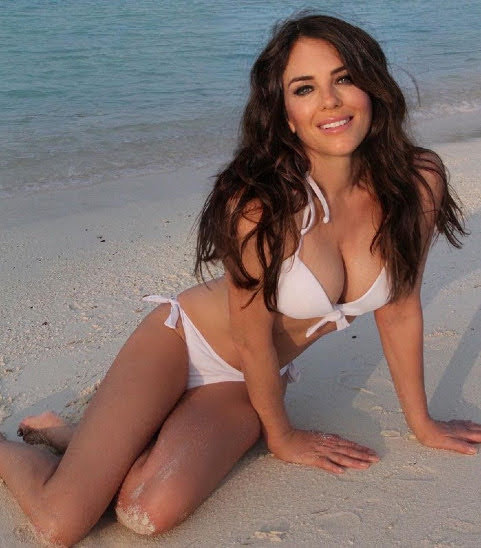 This one is only for our most dedicated readers as we celebrate #TBT old school hottie Liz and her body of work along with pop culture, community news and top headlines.

KANSAS CITY, Mo. - As more people become eligible for COVID-19 shots and some residents begin returning to restaurants, some businesses in the metro are incentivizing those with vaccine cards to return by offering them special deals. The specials vary between length and criteria, but they all have one thing in common: You need to provide proof that you are vaccinated against COVID-19.

KANSAS CITY, Mo. - Kansas City Hospice and Palliative Care has been working harder than ever to make sure their patients and clients receive important care and services during the past year. They're also one of the many organizations in the community on the front lines of a current and future mental health crisis as the country emerges from the pandemic.

Elizabeth Hurley looks phenomenal in strapless swimsuit - and she has exciting news to share!

Elizabeth Hurley is the founder and model of her swimwear label, Elizabeth Hurley Beach, and the star had some exciting news to share with her followers over the weekend.

Convening his first formal news conference Thursday, President Joe Biden stepped into a swirl of issues that have bubbled up at the two-month mark of his presidency, which has been almost exclusively focused until now on confronting the coronavirus pandemic.

"Sesame Street" has often introduced new Muppets to teach children about topics like , and homelessness. Now, the show's two newest characters, 5-year-old Wes and his father Elijah, will offer a lesson on race, Sesame Workshop, the nonprofit behind the iconic children's show, announced this week.

Speaker Nancy Pelosi on Thursday warned Democrats against running in California's likely gubernatorial recall election, aligning herself with Gov. Gavin Newsom's call for party unity. "I think it's an unnecessary notion," Pelosi said at a press conference. "I don't think it even rises to the level of an idea."

What ensued was a 15-minute backroom backbiting session reminiscent of Trump's reality TV show. Mandel said he was "crushing" Timken in polling. Timken touted her support on the ground thanks to her time as state party chair. Gibbons mentioned how he'd helped Trump's campaign financially.

Chris Cuomo got favorable treatment from his brother, and vice versa - how can CNN not fire him?

Somebody send over to CNN and their media reporters Brian Darcy and Oliver Stelter the journalistic ethics guide. Not the whole thing; just page one. Or maybe just paragraph one. Circle the part that says, "It is unethical to use your journalistic position to obtain special favors from public officials."

KANSAS CITY, Mo. - You probably thought the Joe's KC Z-Man sandwich couldn't get any better, right? Well, that opinion might be swayed with a new creation from the beloved barbecue joint and a national brand known for its sweet breads. Joe's KC and King's Hawaiian have teamed up to make the "King's Hawaiian Z-Man."

It was Marek Bush who first thought he and his wife should move into a tiny home. Kothney-Issa took a little convincing. "She originally did not like the idea at all," Marek said And who can blame her?

Partly sunny for your Friday, high in the low 60s

Rain will move out Thursday night. Lows will be in the upper 30s. Fog is possible Friday morning. With partly sunny skies, highs Friday will reach the low 60s. Scattered T-storms will be possible Friday evening, mainly for northeast Kansas and northwest Missouri. Some rain may reach the Kansas City metro.

1996 hit "Only Happy When It Rains" by Garbage was the song of the day and this is the OPEN THREAD for right now.