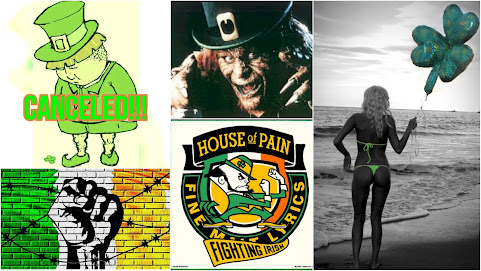 At the conclusion of the news day we offer a roundup of some of the stories that deserve attention from the community news, pop culture and top headlines.

And still the news continues, here's how it looked from our vantage . . .

KANSAS CITY, Mo. - This St. Patrick's Day marked the first time in two years some people were able to celebrate the holiday with in-person gatherings. Health officials asked people to stay away from those parties a little longer, urging the public not to paint the town green until you've had your vaccine.

THIS is what they named the May 2 NASCAR cup series race at Kansas Speedway?!

Names like Brickyard and Daytona are synonymous with NASCAR... and now Buschy McBusch Race?We can't make this up.Well, we can't. But voters can, and they did. They really did.Kansas Speedway and sponsor Busch Beer just announced the NASCAR Cup Series race coming to the Sunflower State on May 2 shall henceforth be known as the Buschy McBusch Race 400.

KANSAS CITY, Mo.- A homeless camp in Westport is getting bigger, raising concerns from those who live and work in the area. The camp is located in greenspace between the Westport Road, Southwest Trafficway and W. 43rd Street intersection. Business owners said they first noticed the site about six weeks ago, and it continues to [...]

Kim Kardashian got into the Saint Patrick's Day spirit as she slipped into a figure-hugging green dress, which showcased her jaw-dropping physique. As the 40-year-old reality showed off her famous curves, she wore her dark brown hair in loose waves and rocked an eye-catching makeup look.

7 times Joe Biden has spoken about his Irish heritage

President Biden spoke about his Irish roots during his first presidential St. Patrick's Day meeting with Ireland's prime minister. "We're going to light up the White House in green ... to celebrate the deep, deep affection that we Americans have, particularly Irish Americans have for Ireland and the people of Ireland," Biden remarked before beginning his conversation with Irish Prime Minister Micheál Martin.

St. Patrick: Not Irish, Dueled With Druids, Refused to 'Suck a Man's Breast'

On March 17, people around the world will celebrate St. Patrick's Day by parading in green hats, sporting images of shamrocks and leprechauns -tiny, grinning, fairy men-pinned to their lapels. Patrick's picture will adorn greeting cards: an aged, bearded bishop in flowing robes, grasping a bishop's staff and glaring at a coil of snakes.

When the Irish fought for Mexico against America: the little-known legend of the 'San Patricios'

From 1846 to 1848, in the worst years of the potato famine in Ireland and during mass emigration to the United States, one of the toughest units of the Mexican armed forces battling the invaders from "El Norte" was the Saint Patrick Battalion, known in Mexico as the 'San Patricios.'

Robert Deniro and Tom Cruise aren't the only celebrities with Irish roots. Black celebrities from across the diaspora including politicians, actors, authors, beauty queens and singers have backgrounds connected to the sunny peninsula.

One of Kansas City's newest luxury hotels is ringing the service bell on a mid-pandemic professional getaway option, unpacking a plan to fill empty rooms with remote workers looking for a break in their COVID-19-restricted routines. And maybe a sip or two of a "resurrected" Kansas City bourbon blend.

'It was so scary': Mother describes witnessing deadly shooting at Independence QuikTrip

INDEPENDENCE, Mo. - Independence Police are talking to two people who they think might know more about a shooting that left one man dead. A mother and kids were caught in the crossfire at a gas station. "It was just like, pop, pop, pop, pop," Kaitlyn Dettman said.


Tell Granny To Hang Up

KANSAS CITY, Mo. - The Platte County Sheriff's Office is warning people against scammers targeting people over the phone. These individuals are demanding money through phone calls, and telling people they will be arrested if they don't pay, according to the sheriff's office.

DAY FORECAST. NEVILLE: WE ARE LOOKING FOR NICER WEATHER, BUT WE HAVE MORE RAIN TO GET RUDE. BUT WE HAVE SNOW TO TALK ABOUT AS WELL FORTNITE HEADING TO THURSDAY. PLANNING AHEAD, THIS EVENING, SOGGY AND WINDY. LATE TONIGHT WE ARE GOING TO WATCH FOR THE RAIN TO CHANGE OVER TO SNOW.

KANSAS CITY, MO - As residents begin to assess and repair damage to their homes in the aftermath of Tuesday's severe weather, the Better Business Bureau of Greater Kansas City is warning homeowners to slow down and start asking questions.

In tweet, Kansas City mayor tells Federal Reserve its Missouri flag is wrong side up

Missouri's state flag looked a bit off to Kansas City's mayor on Wednesday evening - and he quickly took to Twitter to write about it. "I love you, @federalreserve in KC. That's why I wanted to give you a heads up the Missouri flag is upside down," Kansas City Mayor Quinton Lucas tweeted at 6:24 p.m.

Time running out to help Independence homeowners with weatherization assistance

INDEPENDENCE, MO (KCTV) - Homeowners in Independence may qualify to receive free upgrades to their homes through the Truman Heritage Habitat Weatherization program. Truman Heritage Habitat for Humanity is partnering with Spire and Independence Power and Light to help qualifying low-income families with housing upgrades such as: furnace or A/C repair or replacement, caulking, water heater replacement, attic insulation, etc.

How to get a COVID-19 vaccine in Jackson County, Missouri

To get a vaccine in Jackson County, Missouri, you need to sign-up with the county health department.We're trying to help you get a handle on the best option for you.

Mizzou's football planning for full capacity of fans in 2021

COLUMBIA, MO (KCTV) -- The Missouri Tigers football program will be welcoming a full capacity of fans in the 2021 season. The university announced Wednesday evening. "Mizzou Athletics is excited to announce capacity crowds at Faurot Field this coming fall," the school said in a statement.

KANSAS CITY, Mo. - The city of Grandview and Jackson County collaborated to host a COVID-19 vaccine clinic Tuesday. The clinic took place at the View Community Center, a couple miles southeast of the Interstate 435 corridor, which a consulting firm working on behalf of the state of Missouri identified as a "vaccine desert."

KANSAS CITY, MO (KCTV) -- Accessing available COVID-19 vaccine appointments has proved daunting across the Kansas City metro. The lack of available appointments or vaccine clinics in the area has encouraged people to seek doses in rural communities. However, a boost in vaccine supply could soon help people get a COVID-19 shot in the metro.

OVERLAND PARK Kan. - Starting next week, Johnson County, Kansas, will be using a new location as a vaccination site in Lenexa, but some Overland Park City Council members want it at the convention center. "To not use a centrally located facility like this is a huge disservice," Councilman Scott Hamblin said.

We are two days away from the mega mass vaccination event outside Arrowhead Stadium in Jackson County, Missouri.Organizers and healthcare professionals say this is a critical step to returning to normal operations in the Kansas City metro.

OVERLAND PARK, Kan. - Cancer patients getting treatment from out-of-state doctors through telemedicine might soon be out of luck. A provision allowing this exemption in Kansas and other states is about to expire. Before COVID-19, states like Kansas restricted telemedicine to doctors licensed in Kansas treating Kansas patients.

Faith and service at center of church's changes during the pandemic

When the pandemic started a year ago, the pastors at Woods Chapel United Methodist Church in Lee's Summit knew they were needed as much as ever. What they didn't know for sure was how they would reach members of their congregation.On Friday, March 13, 2020, they knew they'd have to close doors to the chapel.

KANSAS CITY, Mo. - The buzz was evident from the moment that Whit Merrifield walked into the Royals clubhouse at spring training. He hadn't felt it for a while. After four consecutive losing seasons, including back-to-back 100-loss campaigns, the Royals made the kind of moves this offseason that served notice that they were done with [...]

Biden is irish american and you ain't black if you don't like him.

May the road rise to meet you, May the wind be always at your back. May the sun shine warm upon your face, The rains fall soft upon your fields.

The so called "leaders" of KC are ruining this city. Leaving a tent city or whatever the hell you want to call it on a busy street corner is just unacceptable.

Move 'em out or take responsibility when something bad happens b/c of this blight!!

It's absolutely stunning that those in charge are so derelict (pun intended) in their duties to the taxpayers!

Vote them all out!!

You mean that businesses in Westport don't want a hobo camp right outside their doors?
What a surprise!
Who are city hall could possibly see that coming?
They don't want customers having to drive by the unsanitary conditions in the amp and maybe even be "greeted" by one of the camp's residents as they come or go and be shaken down for a couple bucks?
Lucas appears to view every issue as a "social justice" opportunity and to have no idea whatsoever about what make an economy work or how money comes into city hall.
The emptiest of empty suits.

The city spokesman says these folks dont want to follow the rules at shelters. Wait now, there are rules about squatting on public property, a whole litany of rules that this encampment is breaking. Enforce the city code, goodness knows KC will cite me for a crack in my side walk....

I’ve seen numerous crashes at that intersection. It’s just a matter of time before a vehicle rips through there.