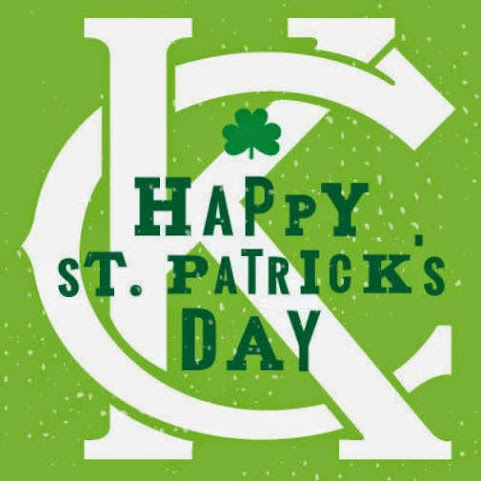 Today might be even more dire given that smart people know this town's problems are just beginning. Still, we share this midday shot of community news, pop culture and top headlines as a fitting distraction.

Saint Patrick's Day events scaled back due to COVID-19

Saint Patrick's Day will of course look different from normal thanks to the pandemic, however, some events are still scheduled for the 2021 celebration. Last year, most bars and restaurants were closed for St. Patrick's, which is typically a high-traffic day in Kansas City.

Landlords are joining United Way to stop evictions with millions of dollars in emergency rental and utility assistance. Representatives will be available virtually on March 19 at 10 a.m. to discuss available funding, qualification criteria, and the application process. This online event is co-sponsored by the KC Regional Housing Alliance and United Way.

KANSAS CITY, MO (KCTV) - Soon, the Buck O'Neil Bridge coming into downtown won't look anything like what you see now. Plans to change it have been underway for a while, and we're finally seeing what the new bridge will look like. The Missouri Department of Transportation revealed new artist renderings of the bridge.

Lisa Rinna All Balls With Breasts On Dinner Plate

Scroll for the dinner plate video. Lisa, who last year made headlines for joking she's an "-sshole with iconic hair and big lips" was here focusing on her assets . A candle-lit and swish dinner table was shared, with the circular white plate showing ten white chocolate truffle balls, plus Lisa at the top.

The IRS is planning to push back the deadline for the tax filing season about one month, to May 15 from April 15.

He told George Stephanopoulos he wants to return to the "talking filibuster." President Joe Biden on Tuesday said he supports changing the Senate's filibuster rule back to requiring senators talk on the floor to hold up a bill, the first time he has endorsed reforming the procedure the White House has for weeks insisted the president is opposed to eliminating.

Liberals were quick to blame former- President Trump, Republicans and anti-Asian racism for the string of Tuesday night shootings at Atlanta-area massage parlors, despite not knowing what motivated the killer. The horrific shooting left eight people dead and another person injured, and a suspect in custody has taken "full responsibility," according to law enforcement.

China and U.S. appear set for a frosty Alaska summit

Competing statements from both sides last week emphasized the rift: "This is not a strategic dialogue," Blinken said of the meeting in testimony to the House Foreign Affairs Committee. A spokesperson for China's Foreign Ministry, Zhao Lijian, quickly contradicted him: "China, invited by the United States, will have a high-level strategic dialogue with the U.S.

Michelle Obama Shuts Down Question About Her Sex Life With Barack

"For some very sick reason, you are very obsessed with this portion of that major historical event."

Abby Hoover Managing Editor The Kansas City Museum at 3218 Gladstone Blvd. will transition to oversight by the Kansas City Museum Foundation (KCMF) by May 1. The Museum, which is wrapping up a multi-year $20 million renovation, is operated by the City's Parks and Recreation Department.

Buckle up. Murder hornet season is around the corner

Winter is on its way out. The days are getting longer, vaccinations are ramping up and an end to the pandemic could be in sight.But murder hornets don't care about any of that.Warmer weather is when they thrive, and scientists in the U.S.

Paul McCartney & Wings - Give Ireland back to the Irish is the song of the day and this is the OPEN THREAD for right now.

Of course the libs blame Trump before a motive is determined. It's what they do everyday. Even though he's been out of office for 2 months 2 out of every new stories are about him. Trump continues to live in libs heads rent free. Too funny!! What saps they are. Especially you CHUD boi.

^^You mean just like how you blame the libs for everything wrong in your failed life? Thought so.

if the bridge is going to look so plain, can anything be dine to beautify it or give it some sex appeal?


What do Lisa Rinna and Michelle Obama have in common? They both have mouths big enough to swallow King Kong. Michelle Obama's new adventure to stay relevant is to trash the Royal Family and mouth off about something she has no idea about, playing her famous "expired" race card. Oh and I doubt very much Michelle Obama has sex at all. EWWWWWWWWWWW that's gross.

If you don't like the bridge you can send money to MoDOT for the bridge that you desire.

MoDOT also accepts E-Checks if that helps you.

Pay up if you want a pretty bridge. What's stopping you? They won't turn it down. 😏🍿🥨

Whatever happened to that dude that had such a hardon over the MODOT engineer?

probably pointed it in a different direction.

Regarding the murder hornet. We need to get Al Gore or John Kerry on the job.


OOH..barf! a picture of Obummer..and TWO of his husband Mike! GROSS!

Never thought I would type this, but Bandit is becoming just as boring and inane as Chimpy weird , with his endless comments nobody cares about. Fortunately, the "Firebird" icon, like Chimp's^^^^^ marks, makes it easy to fast jump to something else.

^^^^Oh, don't be too hard on Baby Burt. It's been a nasty series of days, and since he's had his rusted Airstream hauled out of the city, he's having trouble making friends--even imaginary ones, so give him a break.

The Libtards have been ignoring the black-on-Asian attacks and crimes for months that ARE racially motivated. Videos of these are all over the internet.

Great job gramps! The UAW is going to love you!

I think it's a reference to Smokey and the Bandit movie between his name and the icon. He must be old