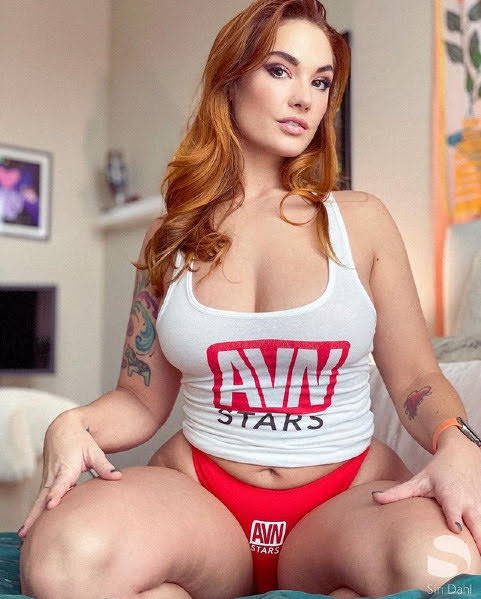 Hottie Siri Dahl remains one of our favorite pr0n star influencers and her continued mainstream success inspires this peek at pop culture, community news and top headlines. Take a peek . . .

KANSAS CITY, Mo. - March 11, 2020, is when hoops came to a halt at what was then called the Sprint Center. 41 Action News sat down with Kathy Nelson, CEO of the Kansas City Sports Commission, the night play was put on hold.

Vaccination sites are expanding in Missouri. It's part of a shift in the state's vaccination tactics.On Monday, Missouri's vaccination process throws a new pitch, vaccinating more than 600 people at the Negro Leagues Baseball Museum."We'll basically have the entire facility, including the atrium, the changing gallery, the visitor's center," said Bob Kendrick, president of NLBM.It's a vaccination double header: There's a morning session and one in the afternoon.

Over the past year, audiences have stayed home and Kansas City's concert venues have remained silent. But behind the scenes - one man is making sure the grand pianos will be ready when we can all gather to hear them again.

It's just human nature to want to film yourself having sex. From making a Xerox copy of one's butt to stripping down and jacking off on Chatroulette, history has shown us time and again that when presented with a new form of technology, mankind won't waste much time before figuring out how to expose themselves on it.

subscribe to The NPR Politics Podcast podcast Now that Democrats have passed President Biden's $1.9 trillion COVID relief bill, all eyes turn to what's next. But what that is isn't exactly clear. "I would expect the president's agenda, moving forward, will reflect the Build Back Better agenda that he talked about on the campaign trail," White House Press Secretary Jen Psaki said Thursday.

Some Americans are already seeing the latest round of stimulus payments hit their bank accounts, as the first batch of funds is rolled out.

The word the Biden administration won't use when it comes to the border? 'Crisis'

The Biden administration is facing what it admits is an "overwhelming" number of migrants at the southern border while scrambling to construct new facilities to hold child migrants -- but it is doggedly refusing to describe the situation as a "crisis."

LONDON - The head of Germany's public health agency on Friday warned that a third wave of coronavirus infections has already begun. It comes at a time when the country has started to gradually relax lockdown restrictions, amid a government-led effort to speed up its vaccination rollout to as many adults as possible.

They'll be J-Rod no more. Jennifer Lopez and Alex Rodriguez have broken up, Page Six has exclusively learned. The superstar couple were photographed just last month blissfully hugging in the Dominican Republic, where Lopez, 51, is filming her latest movie, "Shotgun Wedding." Reports this week said their twice-postponed wedding was back on track.

Plaza plus Prairiefire: How a conversation over coffee tripled Messenger's expansion plans

For those whose thirst for the roaster's growth can't wait until the new store's spring 2022 anticipated opening in south Johnson County, twin Messenger cafes are set to debut next month on the Country Club Plaza, the company announced this week.

These are the best spots for brunch in Kansas City

Whether booze-soaked or coffee-fueled, brunch is a weekend ritual for many in Kansas City. What's not to love? It's one of the best ways to kick off the weekend, and it's also an easy way to get family and friends around the table for some comforting morning favorites like biscuits and gravy, waffles, hash or omelets.

WE HAVE A HUGE STORM SYSTEM CROSSING THE MIDDLE OF THE COUNTRY. IT IS 45 DEGREES. JUST OUT OF KANSAS CITY, WE HAVE ADDITIONAL RAIN EAST OF EMPORIA. WE WILL SEE MORE FILL OUT LATER TODAY. I WANT TO SHOW YOU THE NATIONAL PERSPECTIVE.

KSHMR - Around The World is the song of the day and this is the OPEN THREAD for right now. Keep going for more local links . . .

KANSAS CITY, Mo. - Kansas City Public Schools will vaccinate some of its teachers and staff next week as students prepare to return to the classroom in Kansas City, Missouri. will host drive-thru COVID-19 vaccine clinics on Monday, March 15, and Wednesday, March 17, a spokesperson for the district confirmed to 41 Action News.

OLATHE, KS (KCTV5) - Starting on on Monday, more COVID-19 vaccines will go to essential workers who live and work in Johnson County, KS. The University of Kansas Health Systems is partnering with the Johnson County Department of Health and Environment to vaccinate grocery store workers, restaurant and bar workers, bus drivers, meat packers, and people who work in warehouse settings like Amazon in Gardner and Edgerton.

The Raytown School District is partnering with several community organizations to sponsor a no-contact food and essentials distribution from 10 to 11:30 a.m. on March 20. The event will take place at the Raytown Schools Education and Conference Center, located at 10750 E. 350 Highway, Raytown, MO 64133.

Kansas Secretary of Health Dr. Lee Norman reflects on the year of COVID-19

Kansas City, MO (KCTV) -- It's been a week of somber anniversaries: one year since the coronavirus was declared a global pandemic, one year since the first case was identified in Missouri and Kansas. Joe Chiodo talked with Kansas Secretary of Health, Dr. Lee Norman, in his first in-person interview since the pandemic began.

JEFFERSON CITY, Mo. - Missouri lawmakers are officially halfway through the 2021 legislative session. Representatives and Senators finished up the first half of the session Thursday and now are on spring break for the next week. Last year at this time when lawmakers went on break, they didn't return because of the pandemic.

Changing The Missouri Constitution Could Get Harder

The Missouri House approved a ballot item Thursday that would raise the threshold to amend the Missouri Constitution - and increase the number of signatures required to get something on the ballot. It's an idea that some Republicans have pushed for years as left-of-center groups have successfully amended the constitution to effectively get around legislators who won't consider their proposals.

OLATHE, Kan. - Kansas commuters see it everywhere they drive. Roadside litter on interstates in the Sunflower State is a growing problem, one transportation leaders would like to end. Ugly scenes like the trash scattered around the off-ramp at I-35 near 75th Street are typical.

KANSAS CITY, Mo. - March Madness is once again "March Sadness" for Kansas Jayhawk fans. The men's basketball team was forced to pull out of the Big 12 Championship semifinal hours before their tilt with Texas after learning a player had tested positive for COVID-19.

KANSAS CITY, Mo. - The Kansas City Royals have optioned two pitchers and reassigned another ahead of Saturday's game against the Chicago Cubs. Pitchers Daniel Tillo and Angel Zerpa have been optioned. The squad also reassigned Eric Skoglund to minor league camp. Following today's moves, there are 45 players in Major League Camp, including 13 non-roster invitees.

Monday brought the beginning of Ron Kopp's Offseason Examinations As the league and the NFL Players Association continued their negotiations to finally set the 2021 salary cap, we noted that the Chiefs would be making rapid-fire changes very soon.

Courtesy Alibi's Facebook page Alibi: a true crime bar, is a pop-up coming to Westport for the summer. Located next to Yard Bar, the pop-up will open in May and provide a space for true-crime enthusiasts to have some boozy fun. The crime-themed bar will provide appropriately themed cocktails, crime headline-related art, true crime trivia, and table games.

From Kaw Point And From Strawberry Hill

Next up for Biden is locking up Trump.

Good luck with that Trump hasn't done anything but Biden and that black bitch are squatting in the white house illegally. BTW Biden doesn't have authority to lock anyone up so why don't you learn politics before you make a stupid statement. MORON.

So let me get this right, the world's biggest plague (since 1918 flu), has swept the entire world in just a 4 month period, is killing more people that all the wars the USA has even be in, and we are holding a basketball tourney?

Plus Friday a US official doing a in depth study says the virus is a manmade warfare weapon from the Wuhan bio-weapons lab. So you want to go out and get a warfare weapon in your body? And one from nasty China? Really?


woohoo..the Negro Leagues museum may FINALLY get some visitors..

Why are they wasting vaccines on people that will kill each other anyway?

So....she had had enough of his Rod and he wanted something more on the down Lo?

How to film yourself when having sex? Interesting article. You could get advice from Kim, a girl that went to Shawnee Mission North High School in the late 1980's. She and "big bob" filmed themselves and everyone saw it! What a sloot

AND THEIR REPRESENTATIVE IN CONGRESS IS NANCY PELOSI!