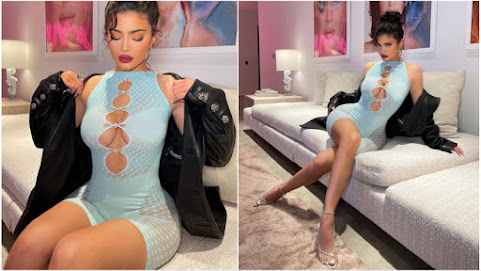 No. 13 Texas defeated No. 12 Oklahoma State win its first conference championship since an SWC title in 1995

KANSAS CITY, Mo. - Airports are getting busier as spring break travelers make their way to their destination. "I am so excited," Katie Mckain said. "I'm ready to be on the beach." Mckain and a couple of her friends are rolling into the weekend.

Kylie Jenner's knit lingerie is hanging on by a thread

Kylie Jenner can't stop stringing us along. The makeup mogul, 23, posted shots from her latest Kylie Skin campaign on Instagram Thursday, sporting a pink knit lingerie set that appeared to be hanging on by a thread. She slicked herself up for the photoshoot with Kylie Skin's SPF 30 Sunscreen Oil ($32), calling it her "favorite way to feel sexy while staying protected."

The Biden administration is riding a wave of rising optimism about the recovery from the COVID-19 recession, with the president and top surrogates hitting the road to sell their relief plan. Economists say the U.S.

Former President Donald Trump made a surprise appearance at a dog rescue fundraiser being held at Mar-a-Lago on Friday -- a rare sighting of the 45th president in post-White House life. WPTV caught images of Trump, sporting a "Make America Great Again" hat, making a quick appearance at a fundraiser for a rescue mission to remove dogs from the meat market trade in China.

FEMA to help with influx of migrant children at U.S.-Mexico border

The Federal Emergency Management Agency will help shelter and transfer a record number of child migrants showing up at the U.S.-Mexico border, the Homeland Security secretary said Saturday, While the administration of President Joe Biden has avoided calling the situation a national emergency as former President Donald Trump declared in 2019 , it acknowledged a rising number of "encounters" at the border since April.

Bitcoin crossed a record high of $60,000 on Saturday morning, continuing its rally as major companies and financial institutions adopt cryptocurrencies. Bitcoin, the world's biggest cryptocurrency, was at $60,415.34 as of 7:25 a.m. ET, according to Coinbase, recovering from a dip at the end of February that followed a previous record high that month.

Where is my third stimulus check? IRS updates 'Get My Payment' tool with information on new COVID payments

You can now find out when your next stimulus payment is expected to hit your bank account or get mailed. The IRS updated the "Get My Payment" tool on its website with information on the third round of stimulus checks Saturday, agency spokesperson Karen Connelly confirmed to USA TODAY.

Play video content Kim K is flexing hard as she re-enters single life ... flexing her glutes, that is. The middle Kardashian sister -- who's in the middle of a divorce with Kanye West -- just posted footage of her breaking a sweat with fitness guru Melissa Alcantara ...

Paris Hilton reveals 'awkward' truth behind iconic photo with Britney Spears and Lindsay Lohan: 'We weren't getting along'

The iconic 2006 photo of Paris Hilton, Britney Spears and Lindsay Lohan, has an "awkward" backstory and the heiress is dishing all about it. On a Thursday episode of her iHeartRadio podcast This Is Paris , Hilton recalled the night the trio was photographed in her car, surrounded by photographers in Los Angeles.

Wedding cake during the age of quarantine

Rainy, windy for your Sunday