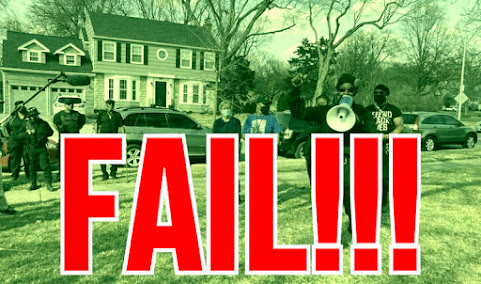 Again and again we hope to remind our left-wing friends that violence, intimation and outrage only serve to weaken their local support.

Remember that all politics is local and after the 2020 election season of protest in Kansas City wherein rallies, marches and highly publicized outcry dominated MSM and cowtown streets . . . Republicans swept their opposition by a landslide.

Yelling in the streets and carrying guns around might feel good but when we talk about effectiveness and creating real change . . . There is no question that these tactics are counterproductive.

About the weekend debacle . . .

Suddenly, we notice that left-wing activists are in support of "open carry" Missouri laws and claim that criticism of gunmen at political protests is racist.

Whilst we're open to trying to better understand this tactic, this blog has also called out white Missouri militia members who brought guns to a protest in order to intimidate progressives.

Reality check: Blocking streets has risks and progressives allegedly attacking a car out of frustration betrays their argument in support of a poor soul killed in police shooting.

Targeting any public official by way of gun play should draw rebuke from those who claim support law & order.

Kansas City should remember Donnie Sanders as an innocent man shot dead in a tragic situation.

Instead, provocative protesters have stolen the spotlight and overshadowed the grief of the family. A legit demand for accountability has been replaced by protesters in costumes hoping to take center stage by way of sketchy tactics and promoting culture war.

Again, waving firearms and yelling is easy, football fans do it after big wins and celebratory gun play is a Kansas City tradition.

Real work to change policy requires a consistent effort to mobilize voters and win support rather than divide communities in exchange for an illusory and quickly fading media spotlight.